We’ve had some wind lately. If you live anywhere on the east slope of the Rockies, you’ve probably noticed. It certainly got my attention the night the west end of my house lifted off the foundation. Or maybe it lifted the foundation, too. I couldn’t tell for sure because the power was out. It’s never a good thing when your local news reports mention power poles and matchsticks in the same sentence. I was amazed we only lost our electricity for a few hours, the way the lines were snapping in the breeze.
Luckily, we hadn’t started calving yet. We sort of cheat when it comes to calving. You see, we have this indoor arena, and it’s big enough to hold all of the cows closest to giving birth. Instead of stumbling around a dark pasture with a flashlight, tripping over frozen cow turds and skidding across patches of black ice, our night cow checks go something like this: 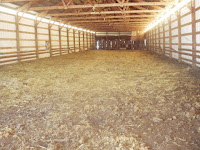 *Start the pickup.
*Drive up to the arena.
*Leave the pickup running while you get out, go through the side door and turn on the big overhead lights.
*Stroll down through the arena and look at the cows, most of whom are kicked back in the straw, chewing their cud.
*Flip off the lights and drive back to the house with the heater running full blast.
We have been known to go as far as parking the camper inside the arena so the night man can just reach out the window, flip on the lights and look the girls over without actually going out in the cold.
The wind throws a bit of a kink into this routine. The nearest power pole is about twenty yards from the arena. The line between the two is strung along a series of tall fence posts. Somewhere along this trail, something has been rubbed bare by frequent swaying in balmy breezes, and on windy days, it sometimes shorts out and trips the breaker.
One night my husband was checking the cows, and lo and behold there was a brand new calf. He grabbed it, intending to slap an eartag in place. Mama was not entirely sold on the wisdom of this plan, and scooted up real close to stick her nose in his ear and express her concerns in a loud voice.
And the lights shorted out.
Turns out, when you are inside a large cavernous structure without electricity, you don’t even have the moonlight on the snowdrifts to help you spot a black cow. And all of our cows are black The arena went darker than the inside of an Angus cow…which was where my husband was going to end up if that mad mama located him because she couldn’t find her kid and she was fixin’ to eat whoever took him.
He didn’t dare move because he didn’t know exactly where the cow was. He had a flashlight, but turning it on might just give her a target. Plus he only had one hand free because he was still trying to hold onto a slippery, squirming calf. If he let go, the cow might really mow him down.
And somewhere out in the void there were those other twenty cows that had gathered around to observe the proceedings. He could hear them, snorting and rustling all around him. He just couldn’t see them.
And that, folks, is what you call a real dilemma.

That's what I call a cliff hanger

Enjoyed that story about the lights going out. You have to have been through something similar to fully appreciate the "humor" in it.

Naturalist Loren Eiseley I think it was who told of walking crosscountry somewhere on a moonless night and being followed by a bunch of heavy breathing animals who scared the daylights out of him and turned out to be a herd of curious cows.

Hey, you can't leave us hanging there! What happened next?

Annnddd....when I asked, he couldn't remember how he got himself out of there, so it's a cliff hanger for all of us.

Our power went out earlier tonight, but we don't have cows, just a couple cats, and they live indoors and aren't pregnant. :)

Trying to do homework by candlelight = not that fabulous, but it's nowhere near as "extreme" as dealing with an unhappy half-ton animal!

Glad he came out of it okay, however he managed to do that.

Oh my gosh!!!! I miss being in the country! That is a pickle all right!

Over the years my city friends have often asked. "But what do you country folks do for entertainment and excitement"?