Of Kings and Clowns and Kevlar

As some of you may recall, a couple of weeks ago I had a little contest, in which the winner was awarded her very own souvenir Bullrider Koozie Vest from the Pendleton Round Up. The beverage coolers are designed to look just like the protective vests worn by cowboys in the roughstock events of rodeo--bullriding, saddle bronc riding and bareback riding. There is a very touching and sad story behind the development of these Kevlar vests, but it turns out I'm not in the mood for that kind of thing today, so we're going to talk about beer vests instead. 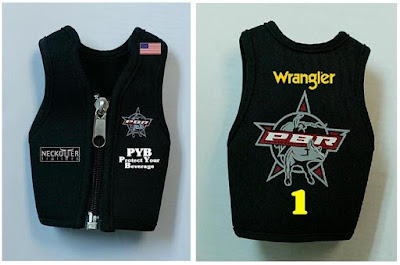 I moved to Pendleton in 1997, which happened to coincide with the height of the career of a cowboy by the name of Ty Murray. The King of Cowboys, as he was known then. And still is, although Trevor Brazile will break his record of seven World Champion All Around Cowboy titles this year. Some people will tell you Ty did it the hard way, competing in the three roughstock events, versus the three roping events Trevor enters. Go ahead and jump into that debate. I'll stand back and watch the fur fly as the roughstock aficionados and the timed event fans go at each other on the subject of what makes a 'real' cowboy.

Because of course, being a roper and all, I have no opinion on the fact that those wimpy roughies get re-rides when they draw a piece of crap animal to compete on, while us timies take our lumps and head on down the road.

Anyway, back when I blundered into my first Round Up as part of the sports medicine crew, Ty Murray was as much of a pop star as his future wife Jewel, who he had yet to hook up with. Being single and famous, Ty attracted a lot of attention from the female segment of the population. Especially the inebriated segment. And since there is no area behind the bucking chutes for the cowboys to lurk, they end up hanging out on these benches behind the North Grandstand, right out in the main flow of traffic between the beer stand and the restrooms. Handy, no? 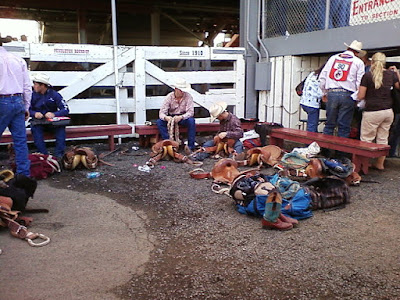 There was no way Ty could warm up there. He was swarmed by fans every time he showed his face. It was like the rodeo version of the Beatles. He had no choice but to hide out in the Justin Sportsmedicine trailer parked right across the road. 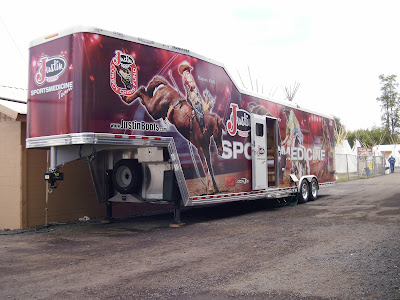 Which is how my job description suddenly went from athletic trainer to bouncer. When Ty was in the trailer, someone had to man the door at all times to keep people from barging in and asking for an autograph while he was kicked back on a treatment table in his underwear icing his knee (actually happened, by the way). And that's why I ended up spending quite a bit of time in his company, and if you spend any time at all around Ty, you will hear some really good stories.

Two of his best mates at the time were Adam and Gilbert Carrillo, identical twin bullriders who stood about five feet tall, with round, baby faces and non-stop grins. I felt like a gorilla next to them. When Gilbert propped his feet up on the table, Ty asked him if his mommy still had his little booties bronzed when he grew out of them.

The three of them had recently been at another rodeo somewhere and gone down to the bar afterward to blow off some steam. As the evening wore on and everyone got good and loosened up, Gilbert got into a scuffle. His friends were smart enough to haul him away before he got creamed because the guy was, of course, much larger than Gilbert. Pretty much everybody is.

Meanwhile, Adam was behaving himself elsewhere in the bar. Unaware that his brother had been antagonizing  the locals, he wandered into the restroom, where some guy he'd never seen before took one look at him, called him a not-very-nice name, and knocked him on his butt.

The next day, Ty found a shop that produced custom-made lapel pins. He chose a pair that were about four inches in diameter, bright yellow, and had them printed to his specifications. One said, Hi, I'm Gilbert. And the other? It said, Hi, I'm NOT Gilbert.

Next time you're wondering what kind of a warped person would ride bulls for a living...well, now you know. As it turns out, it's also the kind of person who designs a protective vest for his beer bottle:

Just when I think you can't get any cooler....

Wow! A way to protect my beer from random gunfire and stray bull horns. How cool is that!

Crystal: It's not like I know these people. Very mouse in the corner, that was me. But you might want to remember that I NEVER forget.

Linda: If you ask, maybe Adam will design a martini glass version.

Ty found a shop that produced custom-made lapel pins but now days.. it's easy to find it..