Survival of the Most Fitted

Our cold snap has broken for the moment, last time I looked it was 12 degrees ABOVE zero. Doesn't sound like much, but since it was -22 F yesterday morning, it feels downright balmy by comparison. During the past week of whining here and on Twitter about the extreme temperatures (lowest recorded hereabouts was -30 F down by the Del Bonita Port of Entry), the question I was asked most often is, "How can you even go outside in that?" So I decided we should get dressed for morning chores together, figuratively speaking.

First off is the socks. Well, after my underwear, but we're not getting quite that personal, although I will say it involves red and black animal print. Hey, it's what's on the clearance rack, and it's not like anybody's gonna see it under all these layers.

When the temperature dips below zero, I go with two pairs of socks. The first are light cotton, to absorb moisture and yes, sweat, because feet will do that when you're working hard regardless of temperature. Then I add a pair of wool socks over top.

Next is long underwear. For the extreme temperatures, I break out the UnderArmour. Yes, it really is worth the price, warmer than anything else I've tried, although the consensus is it seems to have been designed for people who don't have butts. If you do happened to come equipped with baggage in the rear compartment, you'll find they have a tendency to creep down in the back, so you want to have a shirt that's long enough to tuck in or you might end up with a cold draft down your butt crack. And yes, the long underwear goes on after the socks. It holds them up, so they don't slide down and leave that annoying strip of bare skin, or get sucked down around your ankles by your boots, which drives me nuts.

Over the UnderArmour I'll either add jeans or thick cotton sweatpants. Jeans tend to bind up under coveralls, so it's easier to move if you wear sweatpants. How much you can layer on depends on whether you need to get on a horse. Too much bulk and you can't lift your foot high enough to get it in the stirrup. Or even the four wheel drive pickup. Around here, we don't use the horses much in this kind of weather because our frequent freeze/thaw cycles make the ground really icy. Add a layer of snow and the footing is downright treacherous, so we manage with the four-wheeler, pickups, tractors, and a really good dog.

For the top half, I start with a turtleneck, then add either a fleece pullover or a hooded sweatshirt. Then comes a silk scarf wound twice around my neck, tied in front, the loose ends tucked into my shirt. Yep, just like the old buckaroos, and there's a reason we're still using them. Absolutely nothing can replace a good silk scarf for warmth and functionality, we've got a whole basket full of fancy neck warmers that tried and failed.

So, here's the inner layers: 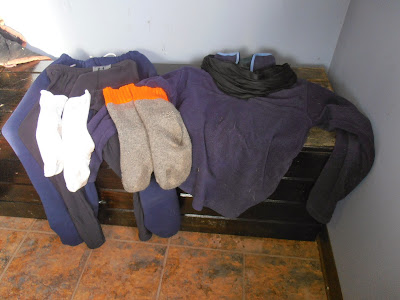 For the outer layers, it's Carhartt all the way, or something similar. Canvas outer shell, quilted thermal lining, and always a hood to keep the cold wind from whipping down the back of my neck.

I've tried every kind of snow boots imaginable, my current favorites are Muck boots. They are warm, come up to your knees to keep the snow out, and are waterproof for slogging through muddy corrals and falling into snow-covered creeks, not that I'm prone to such a thing. The inner layer--sweatpants or jeans--is tucked into the top of the boots and the coveralls pulled down on the outside. Combined, it keeps the snow out of the tops of your boots no matter how deep it gets. 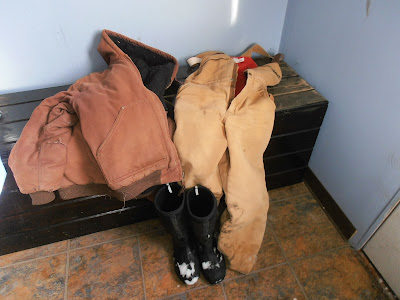 The final layer is head and hand gear. First off, you've gotta have a cap with ear flaps. My husband and dad usually go with the old style woolen Scotch caps. I prefer this fleece-lined model because the flaps come all the way around and under my chin. If the wind chill is really kicking butt, I'll add a fleece neck warmer over top of everything so I can pull it up over my mouth and lower face. The goggles are a new thing. My brother-in-law is a ski patrolman and gave us a couple of good pairs. I started out just wearing them when it was snowing, because wind-driven snow is like having your eyeballs sandblasted. Then I realized these goggles cover most of my face, all the way down below my cheekbones, which adds a ton to the warmth factor. Now I wear them whenever it's really bitter out there.

For my hands, I start with a pair of light knitted gloves. Then I put a pair of my husband's insulated work gloves over top, a couple of sizes too big for me. Oversized is key, because it creates a nice layer of air between the two pairs of gloves, which is vital to keeping hands warm. Plus, if I need to do something that requires fine motor skills, I can pull off the outside glove and my fingers aren't completely exposed. If I'm going to be out on the four-wheeler or a horse for an extended period of time, I'll swap those outside gloves for a pair of fleece-lined leather mittens for even more warmth. 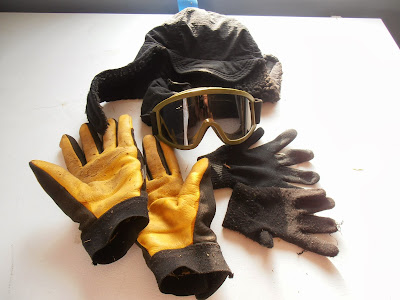 When I'm finally ready to go outside, it looks something like this: 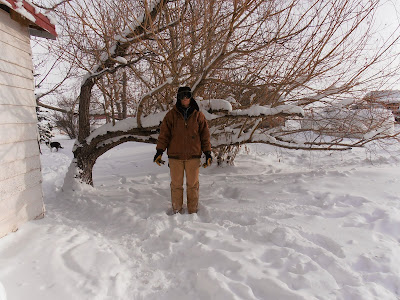 Just for the fun of it, after I was all fitted up today I stepped on the bathroom scale. My full winter gear weighs fifteen pounds. I figure I've already burned a hundred calories just getting dressed, and who knows how many more lugging all that around? So that means I get to eat this extra piece of Christmas fudge, right?

Great blog! Ya'll are tough to live in that kind of weather through the winter. If I lived there, I'd probably sleep in all those layers, lol!

You so deserve that extra piece of fudge!

"...or get sucked down around your ankles by your boots, which drives me nuts."

I can identify with that one - there's nothing like being outfitted for the weather and then feeling your socks bunching up UNDER your feet.

Yesterday my kids didn't even wear jackets out to play. It was like a heat wave. A whole 36 degrees!