As is usually the case in summer, life has been hectic lately. Between rodeos and visiting family and swimming lessons and oh, yeah, work, things fall through the cracks. Like laundry. And dinner. People tell me to make a list. I've never had much luck with that, but I figured I should give it another shot so Wednesday I jotted down a few things I absolutely had to get done after work. Number one was roping practice, which wouldn't take long because I only needed to run a few to tune up my horse.

When I got home at six o'clock I started right in on my list. No dawdling allowed if I was going to be a better, more efficient me. I headed for the barn, then remembered it had rained over the weekend. I zipped the quarter mile out to check the arena instead. Ugh. Caked and hard and in need of working before I could rope. Back to the yard, then another quarter mile up and around to the indoor arena. I grunted and heaved the big front door open wide enough for the tractor, which actually started for a change even if it was on the third try.

Chug, chug, chug…down and around and back to the outdoor arena, where I spent an hour putting around and around until the ground was sufficiently fluffy. Then chug, chug, chug back to the yard. I parked the tractor, called the dog and hiked over to chase the roping calves from their pen to the arena. Except the steers were in the way so first we had to round them up and lock them in the feedlot, where they promptly trotted out the open bottom gate and disappeared over the hill.

Note to self: Add 'gather the roping steers' to Saturday's list.

When I was done swearing, the dog and I sorted off the bum calf that doesn't get roped and locked him in his separate pen, then chased the rest over to the arena. Then I swung past the house to roust my nephew for chute help and toss a peanut butter sandwich in the general direction of my son. Then back to the barn, where my husband's horse had to be captured so he didn't try to attack the others as they passed through the corral, and my mare needed water before I could take her in the barn to administer her arthritis medicine which of course I'd forgotten down at the house, requiring another quarter mile jog.

The geldings were nowhere to be seen. I grabbed a bucket of grain and trudged half a mile to wrangle them from the far east end of their pasture, and half a mile back with two horses trying to rip the bucket out of my hand. Saddled and bridled, I set off for a trot around the hayfield, riding one horse and leading the other so I could both warm up and exercise at the same time. Efficiency counts, you know. Two hours after I started getting ready, I finally roped. Seven calves. Approximately five minutes of practice.

Then I turned around and began putting everything back where it came from. At forty-three minutes after nine I staggered into my house and scratched off the first item on my agenda. I flopped down on the couch, list in hand, and tried to figure where I’d gone wrong.

I’m still at a loss. I guess some people just aren't genetically pre-disposed to being organized because no matter how hard I try, I never seem to get past number one. 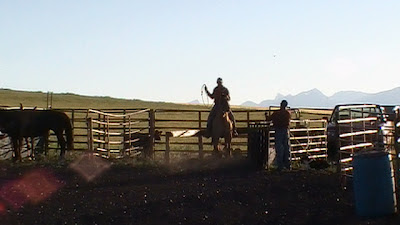 Addendum: For those of you who've stumbled through here more than once, a follow-up to my previous post on Fender Benders. Two weeks later, a credit to the healing power of horse flesh and Vetericyn. 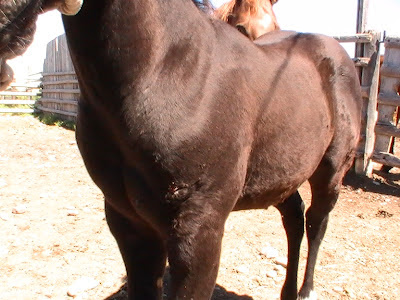 I can see you’re having fun (those steers must be a ball), but the willing horse can get overloaded. Take time for yourself.

Darlene: This WAS my me time.

Glad that it's healing up quickly! We have used Vetericyn on a lot of our horses who get banged up. It seems to help!

HG: First off, that is the best online moniker EVER. And this was our first time using Vetericyn, I was really impressed at how fast it took the swelling out so the cut could start to close. Normally I treat cuts with a combo of hydrogen peroxide and betadine and lots of cold water, but this colt was still pretty skittish so we needed something that was easier to apply.

I am putting Vetericyn on our farm list. It seems easier than the hydrogen peroxide that we use a lot. Glad to get a good tip!