When you live on a ranch certain realities can't be escaped. One of them is the well known fact that barbed wire and horses aren't a great combination. It would be wonderful if we could keep them separated, but no other form of wire is capable of containing cows. Since the horses share the same pastures, they are inevitably exposed.

Honestly, though, I'm not sure it makes that much of a difference. I had a friend in South Dakota who built all pipe and wood fences around her horse pastures. Religiously scouted every inch of every piece of ground for stray wire or other sharp objects. She had the highest vet bills of anyone in town. It's like the harder she worked at keeping them safe, the more determined her horses were to prove it wasn't possible.

Of course colts are the worst, because they're flighty and unpredictable and still learning what things in their environment bite back. After years of raising babies we've developed an attitude much like that of a new car owner. It's not a matter of when you get the first scratch, just how soon and how bad and pray the thing isn't totaled.

Nearly every horse we own has a visible wire cut scar. Ember's is on her left foreleg from when she was three: 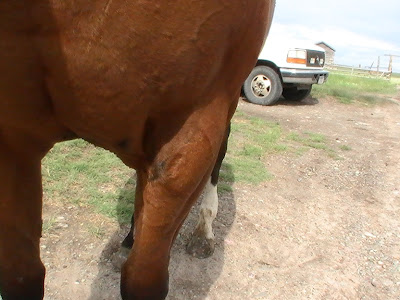 Sweetgrass had a few minor encounters in her early years, but the major damage to her left hock was done when she was eight or nine. Usually this kind of injury happens when there are horses on both sides of the fence, a situation we go to great lengths to avoid if the fence in question isn't solid wood or pipe because they tend to bicker and either strike or kick, resulting in a leg over the barbed wire. That wasn't the case where Sweetgrass was pastured. My sister never could fathom why she stuck her back leg through the fence. She did heal, though, despite slicing the whole front of the joint open and exposing tendons. 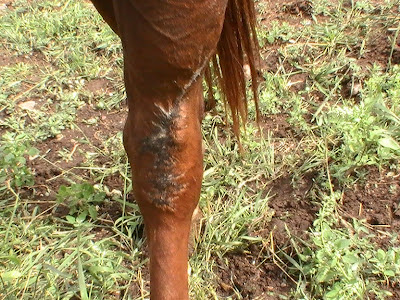 The latest casualty is our new colt, Captain, who had an encounter with a fence while we were gone to the lake over the Fourth of July. Because that's the other given with horses. They generally do the stupid stuff when you're not looking. Luckily this was just a flesh wound, not pretty to look at but no damage below the surface. 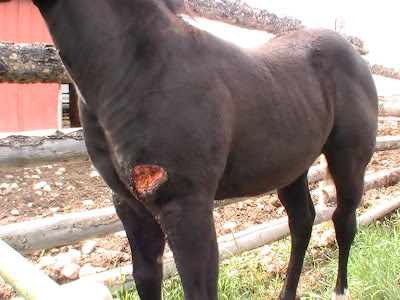 One of the worst episodes was when Vegas was a youngster. Something spooked the whole herd and they ran through a fence, tore down fifty yards of wire (my dad guesses it might have been a moose since one had been spotted in the area and horse are scared to death of them). Several suffered major cuts. Vegas laid his neck wide open, two long, parallel gashes. We couldn't imagine him ever healing, and if he did assumed he'd have huge, disfiguring scars. And now? All that's left is a faint crease and a dimple. 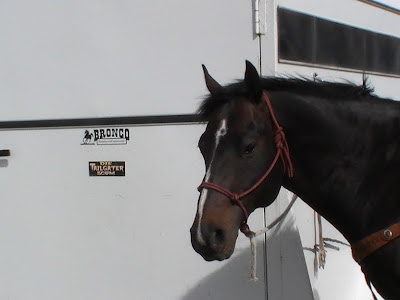 Oh, and that bumper sticker on the rear door of the horse trailer? That's left over from the days when we lived in Oregon and regularly drove through places like Portland and Seattle to get to rodeos. Back when real fender benders were more of a risk than the equine kind.

WOW. That injury looks bad! and that's why I don't work with animals (i.e. Vet. Medicine) and chose to work with people. Hurt animals paralyze me. I hurt for them.

I've found you don't even need to keep them in pasture for a horse to find a way to injure itself. My gelding was tied out next to the round pen - he found the only sharp edge in the area to cut his neck open and require stitches. The following week, he detected money in my bank account, so he tried, half-heartedly, to colic. Just bad enough to get oiled. This was all after he broke his left hind sesamoid running in the round pen. We think he might have gotten cast in his stall and cracked it first. He healed from it all, and is being ridden and shown now, but jeepers! He's a show horse, for pete's sake. We bubble wrap them and they still find a way to get hurt.

We usually use electric wire in Sweden. It doesn't cause as much damage when they run through it (and our horses did) but I think the damages would have been real bad if they had been caught with a leg and it hadn't broken.

I once mistakenly spooked our neighbour's horses (bag on bike handle) and they jumped the barbed wires (they too had cows in the same pastures). Luckily the only damage was from trampling his own hoof and it was minor. And I managed to catch them quickly and bring them into the pasture again.

I met mooses so often with my last horse she ended up not even looking at them ...

I’m glad the wound on Captain isn’t as bad as it seems.

Cows and fences; we had a Holstein named Sniffles. She was a determined fence-breaker; I think it was her way of showing off to the other cows. She would break out of a pasture with rich grass into a plowed field.

Dad got mad (never a good thing), and essentially hung a picture frame around her neck so she couldn’t get her fence-breaking leverage going.

She was humiliated. The other cows chased her. Even the bull wouldn’t touch her. It was pretty severe, but she DID learn her lesson.

Cyndi: It really wasn't as bad as it looked. This picture is actually a week old. The cut is almost closed now.

Gayle: We had a pasture in S. Dakota that had balls of old barbed wire half-buried from where a fence had been torn down. Never had a horse get tangled up in it. Caught my barrel horse out of that pasture and put her in a pipe-fenced corral, though, and overnight she sliced open the INSIDE of her hind leg. No idea how she managed that.

Malin: Hah. Yeah, I bet horses have to get used to moose in Sweden. Here they're a little less common. My dad worked for the Forest Service when he was in college and more than once had to hike down the mountain after his horses because a moose stopped by to visit and tried to say hello.

Darlene: Yep, we've got cows like that. And it seems to be genetic.

I farmed in NZ in my teens and early tweens. I rode a motor bike, not a horse, and when I had the opportunity to I wasn't confident or good at it. I would've liked to have been. Horses are scared of moose? :) We don't have moose in Australia. Moose were introduced to the South Island in NZ and there have been sightings and hair found and DNA tested, but no recent sightings. The hunt for the last surviving moose in NZ is legend. Nice to meet you :).