A couple of weeks ago we drove from Whitehall to Townsend by way of Boulder. For those of you not familiar with the area, here's a map. 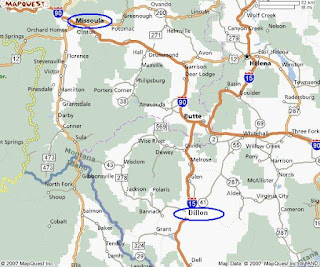 Which reminds me…a map would be a nice thing to have in my car. As opposed to, say, in the house on the kitchen table. Not that it would have helped, because the thing is, I meant to go through Three Forks. Really. I just sort of forgot as we were pulling out of town. To take the Interstate instead of the Boulder highway, I mean. I didn't forget I needed to go to Townsend to pick up my kid. I haven't forgotten to pick up the kid in months.

Our little detour was par for the weekend. Everything I tried to do was at least twice as hard as it should have been. I spent all of Saturday just trying to take a shower.

We were staying in the camper at a rodeo in Dillon and sometime during the night we ran out of propane. Lucky for us they were having a heat wave in southwest Montana so we didn't wake up with our noses frosted to the zippers in our sleeping bags, but it did mean there was no hot water for a shower.

Oh well. No rush. I didn't have to be presentable until the rodeo on Saturday night. Besides, there were showers over on the other side of the fairgrounds. I'd just use them. We lounged around the camper until after lunch, then my husband loaded the propane tanks in the car and headed downtown to get them filled. I gathered towel, shampoo and clean clothes and trudged over to the facilities.

Much to my astonishment, they were pay showers. I’d never seen such a thing. I trudged back to the camper only to realize that my wallet was in the car, which was still gone with my husband. I only needed fifty cents, though. There must be a quarter or two somewhere in the camper.

There were. A whole handful, in fact. Every single one of them Canadian.

I gave up, crawled into the top bunk and dozed until the car returned. Then I retrieved my wallet, checked to be sure I had a couple of crisp dollar bills for the change machine, and drove over to the showers.

The change machine was broken. I opened my wallet and rifled through my silver. Half a dozen quarters--also all Canadian. I gave up. I obviously was not intended to use those shower facilities. I drove back to the camper, fired up the hot water heater now that the new propane bottles were installed, and took another nap.

Finally, forty five minutes before the rodeo was due to start, the water was hot. I cranked on the taps and lathered up, which was when I realized two things. First, I had forgotten to shake the moths out of the shower curtain and at least two were now bathing with me. And second?

My towel and clean clothes were still in the car.

Proof that cleanliness is overrated. However, we (my sons, especially) noticed an awful lot of shiny clean cowgirls at the rodeo, so I guess one has to wash up for public events.

If Canada is our friendly neighbor to the north, I think border states should just accept their coinage. Or not charge for showers. Now I have to go nap. Your ordeal exhausted me.

I was reading a book by Shannon Stacey the other day and there was a reference to quarters and the showers. It took me a while to realize she was saying the showers at the campground (where her story was taking place) were pay showers. I've never run into those either. But I can understand the rationale behind charging for the water, electricity, etc.