No Brain, No Pain 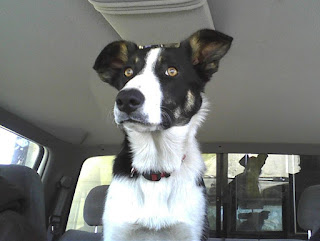 Last week my mother ran over my dog.

No need for sympathy cards, Max is fine. Mom was on the four-wheeler and only going about five miles an hour when a cow tried to hook the dog, who dodged around the front of the four wheeler. Then the cow went after the four wheeler and when Mom gassed it to escape the cow she hit the dog. Max gave one big yelp and ran all the way home, no sign of physical damage. Any emotional scarring appears to be solely on the part of my mother, because Max was right out there in front of the four wheeler again the next day.
Which leads me to wonder…does she have a very high tolerance for pain, or a very short memory? Either of which could easily be mistaken for inability to get a clue.
I’m leaning toward high pain tolerance, since the day after we got her spayed she took herself for a three mile rehab jaunt at her usual breakneck pace with no sign of discomfort. Maybe those spare parts were just slowing her down.
Weighing in on the other side of the argument, though, is a recent Saturday when I was packing the camper, requiring approximately eighty-seven trips in and out of the house in order to properly equip a family of three for a twenty four hour excursion. If we ever left for a whole week I’d have to start packing a month ahead of time. (Cue howls of laughter from my family as they contemplate the chances of me ever planning that far ahead). The dog was right on my heels every single step, even though I forgot and slammed her head in the door three times.
Which puts us firmly back in ‘too dumb to feel pain’ territory.
There was also the night we went for a walk up the gravel road. Max likes to run. Even better, she likes to chase things: birds, rabbits, gophers, imaginary beasties only she can see. Creatures that, despite her better than average speed, she doesn’t have a hope in Hades of catching. That night she took off after a grouse, making a big loop through the hay field, running flat out. She circled back, still flying when she hit the shoulder of the road.
Unfortunately, she misjudged the height of the gravel berm on the edge. It buckled her knees, took out her front legs. She skidded face first all the way across the road, looking up at me with an expression of utter What the heck? on her face. I swear she still thinks I tripped her.
When she finally stopped sliding she laid there for a moment, stunned. Then she jumped up, shook off the dust and bits of rock and bailed off the other side of the road in hot pursuit of a low-flying sparrow.
Last week, she and Greg headed out south to gather cows out of the neighbor's barley field because that knee deep alfalfa they were standing in was apparently getting boring. Halfway home, they jumped a coyote up out of the buck brush.
And Max was off.
Finally! Something she could catch! Which left Greg no choice but to floor the four wheeler on the off chance the coyote decided to stop, turn around and catch Max. He figures they were doing around twenty miles an hour when Max hit a badger hole and rolled end over end at least three times. He wasn't sure she was going to get up. When she finally got her air back, she staggered to her feet, looking a little embarrassed. She hopped on the back of the four wheeler and rode the rest of the way home. This time, he thought, she learned her lesson.
Then they popped over the hill above the house and she spotted the whitetail doe and fawn that live in the trees behind the house. She launched off the back of the moving four wheeler and hit the ground running.
The evidence doesn’t lie. We’re going to have to settle for the No Brain, No Pain theory.
*
Posted by Kari Lynn Dell at 9:34 PM

LOL! I think Max needs to be immortalized in one of your books. She's a character!

I vote for doggie ADHD. She has too short of an attention span to remember the...Bunny!

Max is a Border Collie. Mine ALWAYS gets in front of me when she's trying to herd me in a different direction. Max is probably trying to herd the 4-wheeler! hee hee

Is Max digging holes? My girl is almost to China in my backyard.

I was just going to say that Max doesn't dig much, then realized she'd clawed a hole in the beanbag chair in the living room. Argh.