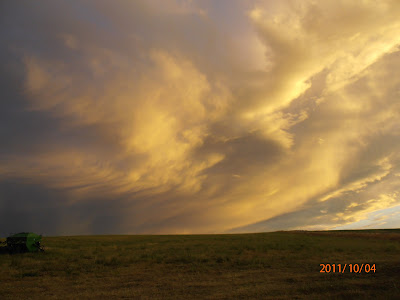 Last weekend we wallowed in one last blast of summer. Sunshine. Temperatures in the eighties. Almost too hot for this time of year, because when the cold weather hits the change tends to be dramatic and the horses and cattle aren't acclimated. Sure enough, Tuesday night the clouds started to roll in, which made for some great photo ops at sunset. 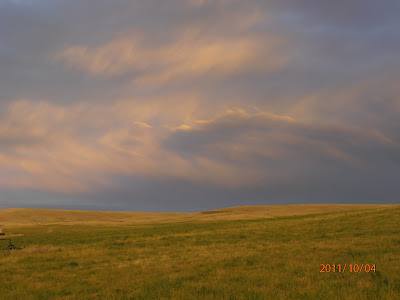 As pretty as the views were, when the clouds start to pile up behind the mountains we know we're in for a change in the weather. 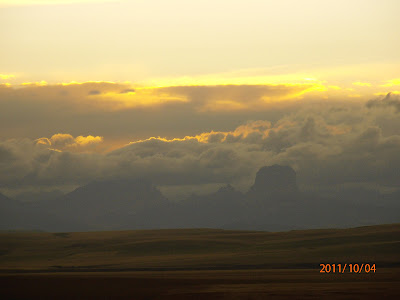 The rain hit Wednesday afternoon right as our crew finished gathering the cows to pregnancy test, which gave them a solid three hours of working out in the cold fall rain. The rain was nearly continuous from then until late last night, a total of over three inches, temperatures in the forties and fifties. I expect we'll have a few sick calves, going from hot to cold and wet so fast, but most of them are big enough now to take the stress.
First thing this morning the sun cracked through and as expected, Chief Mountain has his first shiny new coat of snow. Pretty, yes, but all I can think is "Here we go again." 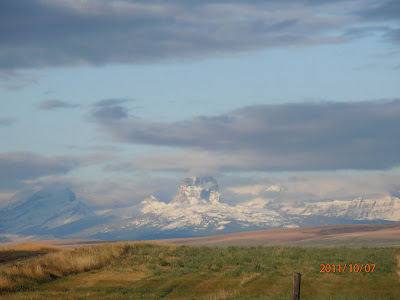 I know the weather can be harsh there in Montana, but man-oh-man, those pictures are gorgeous. That's gotta take some of the sting off. :)

How far away are the mountains from you?

I can't even imagine Montana! Virginia seems so far away. Maybe I'll get there some day.

Love the stories about the animals.

Yes, thanks for the short virtual tour of Montana. Ain't never been there. I'd like to go see it in person someday. Of course that would mean getting away from this passel o' kids I got here. Like that's ever going to happen.

Perhaps when it's time for me to enter an assisted living facility, I should request one in MT. Yeah, that might just work.