*
I realize now why we waited so long to get a puppy. Actually, I realized it a month ago, when I walked barefoot from the bathroom to my bed and stepped on a turd that squished up between my toes and got stuck. I spent the next twenty minutes scrubbing my foot with a wire brush and lye soap and still when I went back to bed my husband said, “Don’t even think about touching me with those feet.”
We got the puppy in large part for my son, but also because she's out of my cousin's excellent cow dogs. About a year ago my son decided he was afraid of the dark and started getting up two or three times a night to beg me to come and lay with him, which I would, until he fell asleep again. Then I'd lie awake for another hour in my bed. So we figured if we got a puppy to sleep with him, he wouldn't need his mother.
Worked like a charm. The kid has only gotten me up in the night once since the dog arrived. The dog is another matter. Three times last night she came wandering through my bedroom looking for new shoes to chew. At two-thirty I was hanging around the living room door, waiting for her to finish a tour of the front yard.
Somehow, this hasn't worked out quite like I planned.
I don’t recall having this much trouble training the last dog that was allowed in my house. But then, Weezy was special. In so very many ways. First off, she was a red tic coonhound, which is what every single girl with a full time job should get for a dog. I realized we might have a problem the day I came home from work and found the entire Aberdeen, South Dakota phone book reduced to one inch fragments. Aberdeen is not a small town. The phone book is a couple of inches thick. It looked like the New Year’s baby had taken a confetti dump on my living room floor.
Then I met my future husband. He also had a dog. A ‘real’ dog named Squeak who worked out in the feedlot and slept in the barn. A dog that, five years after we got married, still operated on the assumption that she knew more about cattle than I did. She may have had a point, but she didn’t have to be quite so rude about it.
Weezy did not work. Her sole purpose in life seemed to be to irritate everyone in earshot. Squeak hated her on sight. Despite reservations about the appropriateness of dogs in houses and coon hounds in general, my husband started out cautiously optimistic. After all, pheasant hunting is big in that part of the country, and he’d always wanted a good bird dog. And it went reasonably well at first. His pointed her at a cornfield. Weezy plunged in and flushed up a bunch of pheasants. Greg shot one.
Given their prior relationship, I felt she was justified in assuming he was aiming at her. Even more so after he had to pack up his gun and spend the next two hours trying to find where she ran off to. Then he belly crawled under the deck, dragged her out of the back corner, and took her back to the cornfield for another try.
He found her under the wooden granary the second time.
The day was pretty much history by then, and so was Weezy’s career as a bird dog. She went back to rambling around the yard baying at rat holes (but only when my husband was outside working where he could hear her because, Hello, what good does it do to tree a rat if no one is there to see?) and lounging on her couch. And I do mean her couch. An old loveseat left behind by my husband’s former roommate and shoved over in a corner of the dining room with vague plans of hauling it to the dump someday. The first time Weezy jumped onto the real couch, my husband swatted her with a magazine. She never slept on anything but her own couch again.
Somewhere along the line, she learned to drink from the faucet in the bathtub, and afterward refused to drink icky stale water from a bowl, although slimy green feedlot puddles were perfectly acceptable. This was problematic, in that she would get up at two in the morning dying of thirst and there was no answer for it except to come into our bedroom and get someone to turn on the faucet. My husband slept on the left side of the bed. The one closest to the door. The first time she stuck her nose in his face while he was sound asleep, he smacked her upside the head.
She never went to the left side of a bed again. And after I booted her outside instead of giving her a drink, she stopped asking in the middle of the night.
Now if I could just figure out how to get that point across with the new puppy. And my son. 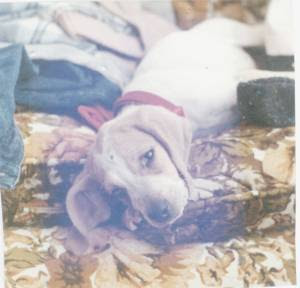 Weezy sounds like she was quite the character. Such a sweet picture. There's nothing more comfortable looking than a dog on a couch.

Ah, puppies. After our dear corgi, Mikey, died unexpectedly, I told the family we would hold off on getting another dog. After all, our only son was graduating from high school and I was on overdrive, running the choir booster club and helping with the grad night committee. A puppy would drive me to madness. That's of course when a friend told me, "I have a friend with a litter of corgi puppies. There's one left. It's a male. Here's her number. Just saying."

And then I blinked and we had Duffy, who didn't want to sleep in a crate or wear a collar or do anything an actual dog does.

I think I hide my insanity pretty well.