The Snow Saucer of Doom

*
Up until about the time I was ten years old, we had two kinds of snow sleds. The first was the old fashioned wood type with narrow metal runners that you could supposedly steer by pushing on the bar at the front. This was a blatant effort by orthopedic surgeons to increase business by leading one to assume that you could veer around that haystack at the bottom of the hill. Their scheme was foiled on most occasions by the steel runners, however, which sank into anything softer than glacial ice and left you pinned to the hillside.

Our other option was the four person toboggan. This was an improvement for everyone except the person at the front, whose legs were wedged under the front curve between the chains, making it impossible to bail out when it became obvious you were heading straight for the creek. And if the others, due to lack of visibility or poor judgment, failed to bail out, the front person always ended up at the bottom of the pile.

Then along came the saucer.

Our first saucer sled was steel, painted orange, about three feet in diameter. It spun willy-nilly as it flew down the hills, giving the rider the distinct advantage of not seeing that they’d pointed it at a drop off, and therefore not dying of fright at the launching point. But the saucer didn’t become a true implement of doom until the day we tied it to the snowmobile.

At first we were satisfied to pull it along behind, bouncing over the dips and ripples in the snow left by the wind. Then someone had to go and boast that they could hang on longer than you could, and the game was on. We went out looking for the biggest bumps we could possibly drag each other over.

Considering the snowmobile had to traverse the same terrain as the sled, you would assume the danger factor would be self-limiting. You would be wrong thanks to Isaac Newton, whose Second Law states that a saucer sled on a long enough rope can be made to go places that no snowmobile need venture.

Our favorite trick was to cut a circle at the side of the hayfield, swinging the saucer across the big drifts along the barbed wire fence. Oddly enough, I don’t recall any decapitations, though there may have been a stitch or two. If that failed—and it often did with my brother, who was stubborn enough to hang on up to and including the point of unconsciousness—you could always aim the snowmobile straight at the side of the coulee, then veer at the last second and send saucer and occupant sailing over the lip of a twenty foot drop off. If they didn’t chicken out and let go, you almost always shook them when they smacked into a wall of snow on the backswing.

By the end of the first winter, our saucer was so scratched and dented it looked like it had been used as a shield during hand to hand sledgehammer combat. Our snowpants and coats were shredded. We had been forbidden to use the snowmobile without adult supervision. Spoilsports.

A couple of weeks ago, we acquired a second hand snowmobile, the first I’ve owned since high school. My brother in law used it for racing. It will go eighty five miles an hour. And my son just got a brand new saucer sled.

Thank the Lord he has no siblings. 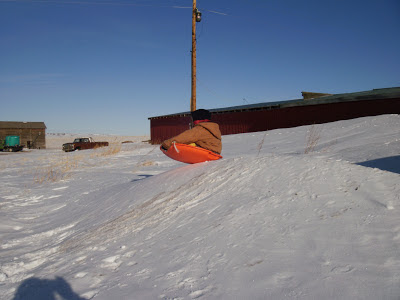 Makes me happy we lost the footage of my head bouncing off the ground like a crash test dummy. It wasn't my fault my niece and nephew chickened out and bailed off the innertube.

Thanks for commenting on my blog, by the way.

We have one of those old wooden sleds on runners, hanging on the wall in our garage. It was my husband's, and has his initials burned into the back of it. Not once have we used that sucker in all the years we've been married, not even when the kiddos were little. Believe me, it's not from lack of snow, either. But can we get rid of it? No way.

rofl Love the hands in the air. He's been watching calf ropers.

He's so darn cute! I loved watching him climb that little mountain of snow. Heee.

I want a snow saucer! Not that I'd ever be able to use it here. We did have a blizzard in '93. I was able to use cardboard on a very large hill. BEST DAY EVER! Although, I did fall through the snow and get my ankle caught in what was believed to be a snake hole.

My uncle used to pull us around the same way - I have 20-something cousins, so there were a few of us at my grandma's house on any snowy holiday.

We didn't have a proper sled though. He's a mechanic, so he just flipped an old car hood upside down, chained it to the snowmobile and away we went.

Thankfully, no flying over coulees...

Our forerunner for the saucer was also a car hood pulled behind a car or pickup on the winter streets of West Yellowstone. This took place in the pre snowmobile era. With forty feet of lead rope you could make the hood climb an eight foot snowbank with ease. Fortunately a close encounter with a lodgepole pine or the local constabulary usually cutailed this sport just in time to prevent significant bodily harm.

Scooter: Innertubes are deadly. They look so cushy and safe. It is a ruse. The only time I went tubing I spent most of the day falling into the middle and getting run over by the back side of the tube.

Linda: We have a pair of wooden skis approximately thirty feet long from my dad's college days. Also indispensable.

Crystal: Remind me not to let you anywhere NEAR the barbed wire fences.

Jamie & Stan: I have very vague memories of the car hood/pickup combination. Much better memories of feeding an entire herd of cows with a car hood/snowmobile because they got themselves stuck on the wrong side of the coulee.

Julie: Actually, I kept telling him we needed to go inside because he was soaked, so at the bottom of every run he was sticking his finger up saying "ONE more time, mommy."

We had wooden runner sleds as well and used them a lot! Probably because we lived on a 1/2 mile long hill with a county road that iced up nicely. In high school we would use the grinder to polish the runners before we started the first run to get rid of last year's rust. You could outrun the dog on those things!

Awe man! I was totally hoping for some doom-filled action! Oh well. If you ever come this way, I have an extra saucer, and a bunch of really steep twisty mountain bike trails we can rip down. ;)

GroGrn: Nothing better than an icy road. Our driveway was perfect for that on sunday.

Sue: I don't think I'm tough enough to play with you. I've gotten wimpy with age.

Do you remember when Dad used to pull us with a horse? It was great fun and a great way for Dad to get the kinks out of a young colt. By the time they had pulled us all over the hayfield in deep snow, the horse was pretty broke.

we never had enough snow to use a sled...not that that stopped us from owning one! every year we would look at it with hope.

Ours was the wooden kind where the driver (haha) could control (haha) the direction of the sled (ha!) by pushing on the steering bar. What a joke.

Your description of being pulled behind the snowmobile reminds me of what we do behind ski boats down here.

It's cold down here. Take it back to Montana, PLEASE

can you imagine how HIGH that mound of snow "looks" to him?

and where are his gloves???

Cyndi: No. I don't want it back. And the child owns approximately eight pairs of gloves, all of which he refused to wear, preferring to just pull his hands up his sleeves. Next time--duct tape.

My favorite part is definitely him climbing back up the snow hill - so reminiscent of all my childhood snow climbing!

The metal saucer was used not only in the winter, but also in the fall in anticipation of snow. Our brother, Marty, and I would hook it up to the three-wheeler (That's not a typo. This was before four-wheeler's were invented), and take turns trying to dump each other in the hayfield.... on bare ground! As if the three-wheeler wasn't enough of a death trap. We chose fall because dad would have killed us if we did it in the summer before he got a hay crop off the field. So our heads bounced off rocks, dirt mounds, and our faces were scratched up from dragging them across the stubble. I have no idea why either of us are still alive today.
Karilynn's sister, Gina.