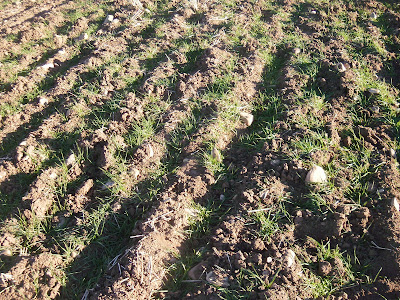 I thought I had heard it all. I was wrong. Today I met a person online who has never seen a dirt clod. Think about that for a minute. A life without dirt. It’s stupefying. And sort of depressing, because people who grew up like this get elected to Congress and become, say, Speaker of the House, and they can’t even find Montana on a map but they get to decide farm policy. (Yeah, I know. That’s almost like political commentary. And Lord knows you get enough of that everywhere else so I’ll hush up.)
I have to confess, though, I too have lived in a world without dirt clods. The north end of Hermiston, Oregon is located on what is essentially a gigantic sand dune thrown up by the Columbia River during the floods at the end of the last ice age. For ten years, I had an arena that was incapable of mud. I thought I had found heaven.
Then one day my husband’s rope horse decided he didn’t really need to back up and keep the rope tight while the calf was flanked and tied. I reached for an all occasion horse training device to give him a little reminder smack in the chest…and came up with a handful of sand.
I was stunned. My entire philosophy of animal training had to be re-envisioned. Dirt clods are the remote control of ranch work. Any time you can’t or don’t want to get close enough for laying on of hands, a dirt clod comes to the rescue.
Dog getting carried away and about to run a bunch of yearlings through the fence? Explode a dirt clod on the ground in front of him, he’ll weaken. Got a pair of bulls that refuse to quit fighting and move along? Unload the double-barreled dirt clods on their butts. Rocks will do in a pinch, but they just sort of plunk and drop, without that satisfactory poof! of dust that makes a direct dirt clod hit so satisfying and effective.
Like all training devices, dirt clods require practice, and should be implemented with care. One year at the Glendive college rodeo, the boys from Western Montana College were having a problem with their bulldogging horse. Just as they started to slide from the saddle and grab the steer by the horns, the horse would duck off to the left and drop them on their head. So after the rodeo, they ran a few practice steers to address the issue.
Rooster picked a spot out in the middle of arena, selected a couple of prime dirt clods, and said, “Go ahead. Run a steer and jump him right here in front of me. I’ll nail the horse in the shoulder with one of these clods when he tries to duck out.”
His teammate’s eyes got big. “But you might hit me instead.”
“Not if you get your butt out of the saddle and down on the steer.”
(This is probably where I should put the Don’t Try This At Home disclaimer, right?)
As it turned out, the dirt clod approach did not prove to be effective in this particular case. Mostly because the steer wrestler kept bailing off before they got within range of Rooster’s throwing arm, whether the steer was in a position to jump onto or not. I would like to say I wouldn’t have been dumb enough to get on that horse in the first place. I would be lying.


The horse in question wasn’t ours; we’d taken him in to train. They called him Bear. He was prone to sulling up and refusing to move. One afternoon, my mom and my sister were up at the indoor arena with Bear and another horse or two. I was enjoying the fact that there was no one around to notice I was stretched out on the couch in the middle of the day until the phone rang.
“We can’t get Bear to move,” my mother said.
“Uh-huh,” I said, unsure why this was my problem.
“If we smack him on the butt, he kicks up,” she said.
“Uh-huh.”
“You’re brave,” she said. “We need you to come up here and get on him.”
“Uh-what?”
She hung up on me.
I gave my couch one last, longing look and went up to the arena. “What exactly is it you want me to do?”
“You ride him. I’ll smack him on the butt when he stalls,” my sister said.
Hmm. That didn’t sound so bad. It wasn’t like he was serious about bucking. I climbed on. Eased him into a trot. He made it half a circle before locking up all four and stopping dead. My sister sidled up and swatted him. He snorted, bucked, and kicked straight in the air with both hind feet.
Luckily, my sister is not very tall. Especially when she’s flat on her belly in the dirt. He kicked right over her head. She crawled to her feet, dusted herself off and stepped back. Way back. Then she said, “Okay, new plan. How ‘bout I just hit him with this dirt clod instead?”
If there’s ever a time you hope your sister throws like a girl, this would be it.
*
Posted by Kari Lynn Dell at 9:49 PM

Well told. I always like that term, "sull up."

LOL! Love this post. Reminds me of the dirt clod fights we used to have when I was a kid. Good times.

Dirt clods come in handy when your mad and need to throw something. You can throw a dirt clod as hard as you can and work out your frustrations... as long as you throw in a safe direction that is...

Ron: Ha. Didn't even think about it. I forget that everyone doesn't use those sayings.

Debbie: Yeah, it's always kind of embarrassing to have to explain to your husband just exactly how you came to knock that window out of the camper. Not that I would know personally or anything.

De-lurking here to say I'm enjoying reading your blog (which I found by way of Rock in my Pocket). And I didn't mind the commentary--probably because I agree with it. (It drives me crazy to no end that people who've never been in a classroom get to decide education policy, and even curriculum. As if.)

I travel regularly to South Dakota, so I'm also enjoying your pics of the prairie very much. Good luck with the snow! (We don't have any yet in Ohio. Yet.)