Imagine you're in a huge city park. In this park there are hundreds of families picnicking, when suddenly a storm rolls in, with fierce winds and hail. Everyone runs for cover. In the confusion and panic, children are separated from their parents. Some latch onto the first adult they see and follow them in hopes of being led to safety. Some just run in whatever direction will keep the wind at their backs and the hail from stinging their faces. Fences are trampled in the rush to escape the brutal weather. Children and adults are driven beyond the boundaries of the park and into the surrounding area.

When the storm passes, children are scattered for blocks in every direction. Some sit or lie down and wait to be found. Others begin wandering in search of their parents, but with no idea which direction they came from or which direction their parents went, they end up even more lost. Parents are running around yelling for their children. Kids are so exhausted they don't answer.

That pretty much sums up what happens when a blizzard hits a herd of cows. Ninety percent of the time our shelters are sufficient to keep the cattle from wandering. The blizzard we had two days ago was in that top ten percent. Records were set for wind speeds and snowfall amounts. The drifts piled up so fast and so high they filled the calf shelters and pushed the herd out into the storm. The wind pushed them through creeks and fences, over hills and into coulees. Cows and calves from the west field ended up clear out south, along with cows and calves from our registered herd in the east field. Cattle from the west field were pushed up and over the ridge and down the road into our neighbors' pastures.

Once the storm ended, calves either hunkered down where they'd ended up, or began wandering in whichever direction they thought seemed likely to take them home. For two days, my view of the world has looked pretty much like this: 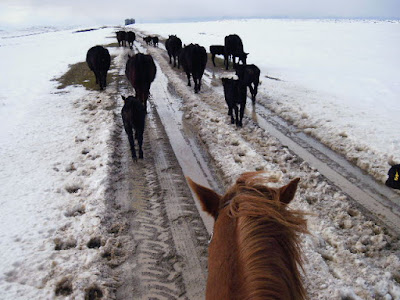 We've been attempting to locate all of the missing cows and calves, return them to a central location, and reunite them with their mothers. Today we found a calf trotting down the main gravel road, three miles from home, headed in the wrong direction. Sadly, I do not have video of my husband roping him out of the back of the pickup. You're also not going to get to see me trying to chase down and rope a calf on foot while leading a horse, with a quart bottle of milk tucked under one arm. 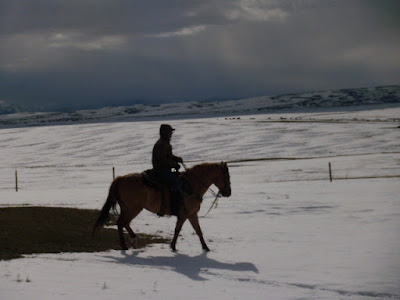 By late Saturday evening we had most of the cattle back where they belonged, or at least mothered up. There are still half a dozen of the neighbors cows in our south field but their calves are with them, so they'll stay until more urgent matters are attended to. Sunday morning we'll be back at it, looking for motherless calves, childless cows, and the inevitable sick calves that always follow a major storm.

What we haven't found so far are any dead calves, which is an outright miracle given the severity and duration of the storm. So even though we're exhausted and saddle sore, the day still came to a beautiful end.

OH my! You must be exhausted. That last photo is gorgeous.

Another great example of coping with and accommodating the power of natures forces on a continued basis. Folks that have this fortitude and ability are seldom rewarded with material wealth. They do however develop a richer reward.
They develop security and pride in knowing they can successfully compete and succeed.

I hope your calf losses remain at zero as any loss is the loss of hard earned profit at shipping time.

Oh my gosh. Just reading about it is exhausting--puts last winter's big snowstorms in my neck of the woods right into perspective. At least I didn't have to go out afterward and hunt down cows. So glad you didn't find any dead calves--that IS a miracle. :)

Hope you have a chance to get some rest soon.

It's too bad you can't have a day just to recuperate. Those storms are horrible on cattle. On the plus side, it's nice to see such dedication. Hard working stepdad lost 27 bred cows in two weeks because he was too busy drinking to chop water holes.

Much respect for you.

I hope your calf losses stay at 0.

I have so much respect for how hard you work. I am disappointed to not get a video of you chasing a calf on foot! :)

thank you for sharing your life.

Well done! i wish i had been there to help, good luck finding the missing few, thoughts are with you - sadie xx

Sadie: Do you recognize those ears in the top picture? They're still on backwards.

Here I am enjoying my spring and you have a late winter storm and having to take care of all the livestock. I hope you find all cows/calves and everyone of them is OK. When growing up after a huge blizzard our cows would get snowed in pastures & we had no way to feed them. Our crop duster friend would fly over pastures and drop hay bales from the plane. Hope you update us about your cattle...