My horses have attitude.

Not all of them. Just the good ones. Seems like the better they get in the arena, the more obnoxious they get outside. Sort of like most professional athletes.

It’s possible it could also be genetic. My last three rope horses have all been tough little Roan Hancock mares. Betsy…well, she deserves a blog post all her own. It’s impossible to do justice to her sheer contrariness in less than a thousand words. Suffice to say my sister once rode into the arena at a high school rodeo with Betsy packing a five foot long weed in her mouth because none of us was tough enough to get it away from her.

But she was also the best I’ve ever roped on.

I got Scotty when she was nine years old. She was supposedly broke. She bucked me off twice in the first week. The second time, I didn’t even get all the way into the saddle. As I swung on, she spun left toward me, threw me head first off the other side, and hung me up in the stirrup. Lucky I wasn’t wearing the wool socks that make my boots fit real tight or we might not being having this conversation.

She also made me a roper by letting me run twenty calves a day without ever cheating or overheating. When she turned twenty-two I gave her to friends and she made a roper out of their daughter Hallie, too. Last I heard, she’s training a new kid to mount up on the run. 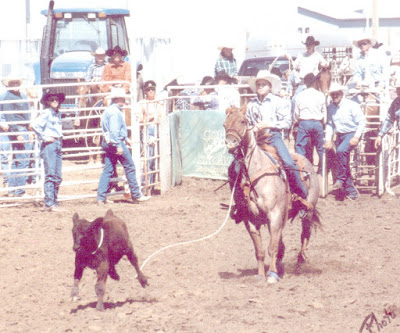 
Now there’s Ember. She’s Betsy’s daughter. Scotty’s niece. Sixteen years old, been hauled a zillion miles and roped on at nearly as many rodeos. Saturday, she wouldn’t get in the trailer to go to the rodeo in Standoff. She spooked at the sponsor signs on the arena fences. She balked when I tried to ride into the roping box.

Then she scored perfect and gave me a shot so sweet it still makes me want to cry that I missed it. 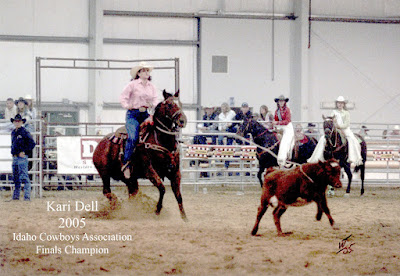 Given all that, is it any wonder I have the occasional rodeo-related nightmare? Ninety-nine percent of the time it’s the same dream. I’m at the rodeo and suddenly they’re calling my name to compete and I either can’t find my horse, or she’s still at the trailer which is parked half a mile from the arena, uphill both ways.

In the other version, I realize the rodeo is about to start, I’m still at home, and my horse refuses to be caught.

There are other nightmares, of course. Like the one where Scotty slams into the back of the roping box so hard she busts the fence and they have to stop the whole rodeo to fix it.

Or there’s the one where I’m riding a young horse and it suddenly flips upside down in the roping box.

Oh, right. That was in Cottage Grove. But we did recover nicely and still win a check.

The worst nightmare is the one where my psychologically-challenged barrel horse plasters himself to the front of the bucking chutes and refuses to move while the announcer mumbles, "I'm sure she'll get him going any minute now." Then he does go--straight to the fence behind the first barrel, where he locks up again.

Come to think of it, that’s why we never went back to Clearfield.
After acquiring Scotty, Hallie developed her own set of bad dreams. Like the one where she was practicing her goat tying dismount at night on the racetrack at the Fort Pierre rodeo grounds, and when she stepped off Scotty locked up the brakes, pulled back, and tore off into the pitch black maze around the race horse barns as the announcer was declaring that it was now time for the goat tying to start. 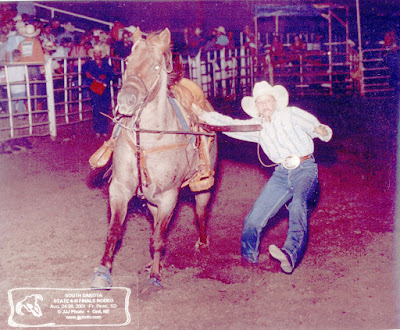 Postscript: At a writer's conference in Denver, I sat with a group of very non-rodeo women and learned that every athlete or performer seems to have their own version of my nightmare. The band members forgot their instrument. Or worse, their uniform. The sprinters were in the restroom when the starting gun went off for their race. And everybody seems to have had the "What do you mean we have a test today?" classroom dream. So what about you, blog readers? What's your recurring bad dream?
Posted by Kari Lynn Dell at 8:25 AM

I think I love Scotty - what a character!

And I'm sure you were givin' her all she's got.

My own recurring nightmare, as you're asking, is losing my children; not being able to find them anywhere. I hadn't thought about it before, but I wonder now if that has something to do with their being special-needs? -- or just maybe my over-protectiveness leaking. Dunno.

When my son was younger, I kept dreaming that hubby & I are at a party and I suddenly remember we left the baby home alone. We race home while the streets keep changing like an Escher drawing, and I'm trying to call someone but my cell phone is now on a party line and no one will get off to let me place the call.

As for my horses, my gelding is a dream in the arena and ADHD everywhere else. My mare is a sweet little cuddle bug until you get her at a show, where she runs through every pattern and spooks at the judges.

Whew! Good to see blogger is functional again. Earlier today it wouldn't allow posts, but it apparently stored up the rejects and posted them repeatedly. Really, Harley May isn't quite that insistent. I was a cocktail waitress in a college bar. I lived her nightmare on quarter beer nights.

Gayle & Suze: I've had the 'forgot or lost the kid' dreams too. And possibly one incident that wasn't exactly a dream.

Why is everyone else fully dressed? Didn't they hear that underwear is the prescribed uniform of the day? They make me feel conspicuous!

Mine is the classic actor's dream: on stage, in front of a huge audience, and not only do I not know my lines, but I can't even remember what the play is. Gives me a cold sweat every time.

I get the ones where I'm mostly naked wandering the halls of school and am very conscious of the fact, but for whatever reason I'm not going home to change. Instead, I'm slinking around the school trying not to be noticed.

I don't know much about rodeos, clearly. However, I am extremely impressed at virtually knowing an Idaho Cowboy Association Fianl Champion. Sounds WAY better than the finals. May I have your autograph?

LauraAnne: If it could Photoshop I'd fix that. Obviously, spelling isn't a hot subject at photography school, but I can't complain too much since he gave me picture free.

Free pictures are pretty hard to turn a nose up on. I worked in graphic design for a good while, and this is a very true statement. Spelling and grammar are not particularly emphasized. Not like engineering. We pirde ourselves on that there good grammar.

Hm, this is my second or third click attempt. Lest you think I have multiple personalities (not necessarily an inaccurate perception) I'll try to remember to choose the Google accounts.

And further events in the click-fail, I sent that email from my school account, not the one associated with the comments. *facepalm*

LauraAnne is officially my new hero. She fixed the typo on my ICA Finals photo that has been bugging me for four years. *standing ovation*

(if you want to learn how to do that, I can teach you)

I think I have more re-occurring dreams than anyone I know. I have the one where my legs are all twisted up and I can't walk. I get them untwisted, take one step, and they twist again. This common thread weaves through all my dreams. And then there's THE ONE. You know what I'm talking about, Karilynn. The bathroom one. I have to go to the bathroom, and the only toilet is in the middle of a room full of people. Of course, I usually forgot to wear my shirt to work that day. I'm telling ya', I've got a whole library of these dreams. I would be a psychology clinic all by myself. - Gina

Your other sister here, anyone else get chased by bulls. These are not ordinary bulls, they can climb walls and stairs, get out of pens etc. etc.
Of course, there have been a few times in my life where I have been a wide awake bull chasee.

So we're doing an ice dance, the Canasta Tango in fact, and just coming out from the first turn when my dear wife pushes a trifle wide. She kicks my skating foot out from under me, forwards. I somersault backwards in the air and hit the ice elbow first.

People who watched it tell me it looked amazing. I can confirm that in such situations, time really does slow down. Now every time we do that dance, I remember.

Gina: I hate THAT DREAM. I also worry a little that you and I are the only people I know who have it.

Lola: You get the bulls from Mom. She has those dreams, too.

Gary: I believe that might even be better than the swan dive I did off my barrel horse when I was ten.

Nightmares. I have no idea why because we've always had a big thing about animals getting fed properly. I dream that I either haven't fed and watered the dogs or horses for days and they are starving. I wake up crying, cram clothes on and race out to check everything. Of course, the dogs stretch and trot over to the gate, wagging their little stubby tails behind them. The horses acknowledge me with reluctance and go back to sleep. All except Skidboot who waddles over to smell my breath and see if I've just brushed my teeth. No idea. She just loves the smell of mint.