In my last post, I may have made mention of the fact that our snow was almost gone. Even posted a picture or two. The weather has been so nice, in fact, that I completely lost my head yesterday and decided to enter a rodeo coming up ten days from now. Got up this morning and went out and captured Ember, my very best roping mare, who only has to play when we're serious.

So of course, by this afternoon: 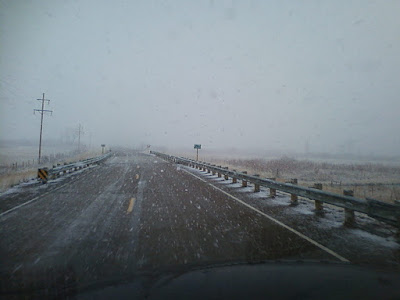 We were out on the highway because heading north across the border with a horse is not a simple process. It requires a minimum of a week of pre-planning, beginning with a trip to the veterinarian. Border crossings require a blood test known as a Coggins that screens for infectious diseases, plus a general health check, which is sort of a joke because the vet has to just look at the horse and say "Yep, it looks healthy." Then she signs a certificate attesting to that opinion and sends it to the state veterinary office for approval, for which they charge a mere arm and a leg.

The chances of me wanting to haul a horse to a rodeo when it is visibly ill are somewhere between zero and minus one, plus it's good for thirty days and who knows what she'll look like by then, but it is a nice little cash cow for the state and federal vet programs, so I doubt it's going away any time soon.

I will not be going into details about the ordeal of hooking up the trailer. Suffice to say there was mud and ruts and snow coming down sideways and every time I would almost get the ball lined up with the hitch, the back of the pickup would slide one way or the other and it's a good thing our child was not present because he would have come away with an expanded vocabulary.

Eventually, though, we did get hooked up, and I got to the vet clinic on time for our appointment. Had to borrow my parents' rig since ours is a two wheel drive: 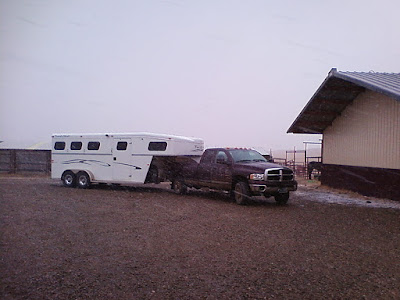 For those of you who've never been near one, this is the view inside a slant load horse trailer. It's called a slant load because the horses stand at an angle, not facing directly forward. Research has shown they can balance better in this position as the trailer moves, and experience less fatigue with hauling. The dividers latch on the right side and swing to the left. As each horse is loaded, you swing the divider across and latch it to separate the horses. This is a three horse trailer, with a rear tack compartment in the back left corner. 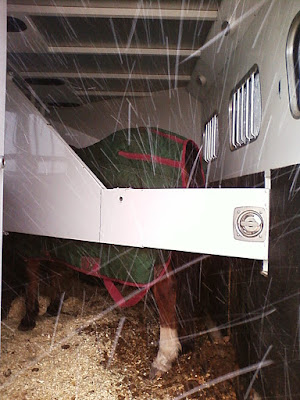 This is the look Ember gave me when I told her she had to get out and stand in the snow for her exam. 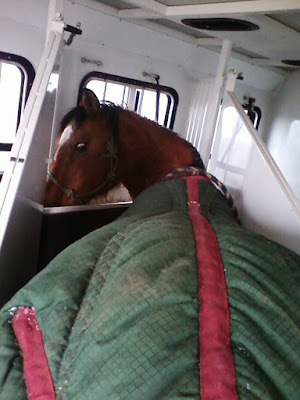 Good thing she had her coat on: 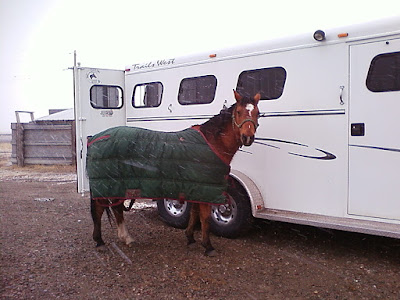 It has stopped snowing now, and they're promising us fifty degrees by Saturday. So maybe I haven't cursed us all with another six weeks of winter by having the gall to poke my head out of my hole and enter a rodeo before the first of June.
Posted by Kari Lynn Dell at 7:56 PM

Well at least I know who to blame when it keeps snowing now. And I'm not talking about Ember (who looks both sweet and feisty).

Good luck with the rodeo!

You fail to mention that the top picture of the highway could be taken in June or July as well.
Good luck with your roping!

Coggins test - yep, been there, done that. Yes, it costs, and I've been in situations where a state that previously didn't care suddenly DOES want that piece of paper and there's a mad rush to get back to the ranch and meet the vet, then dash back to the border... yikes. But for all of us who would never trailer an ill horse, much less ride or show them, I'm betting there are people who don't care if their horse infects the rest of the country, as long as they have a chance at a prize. (They're probably the same people who take their hacking, sniffling kids on airplanes.)

What a pretty horse! And that's pretty much the look I give anyone when I have to go to the Dr, too. *G*

I enjoy this blog -- learn so much. I never have seen the inside of a horse trailer, and so that was actually cool.