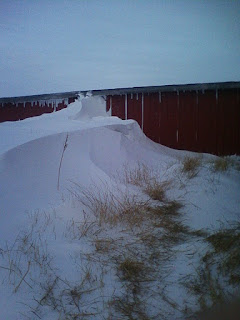 Finally, in the wee hours of the morning, the snow and wind let up. So far it looks like everything survived, but the drifts are so deep in spots it's possible a cow could be buried and we won't find her until spring. The storm was pushed out by an Artic air mass, which means it's fifteen degrees below zero, but we were able to get out and feed all the cows so they're happier than in the midst of the storm.

It also meant I finally had time to show the Chain Cow around the ranch. (If you don't know the story of the cow, check it out here). She was wishing she'd haired up for winter before making the trip. Here she is, catching a wave--Montana style. 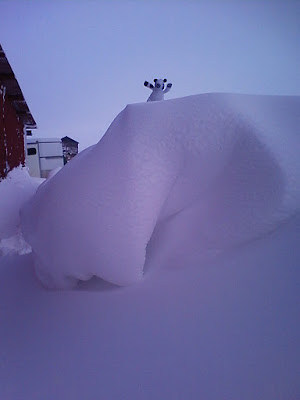 After taking my photos I stuck her in my pocket and went on doing chores, which in my case meant packing hay to horses. I forgot all about the cow until I was headed back to the house. I'm afraid she won't be quite as spiffy when she reaches her next destination. 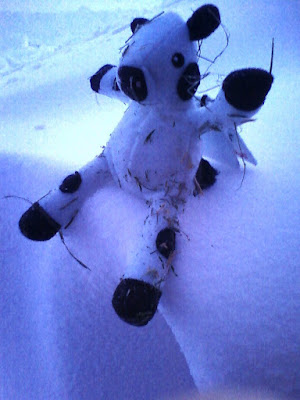 So, who's next on the Chain Cow blog tour? First to raise their hand gets her, although she did mention she was hoping for someplace quite a bit farther south.
Posted by Kari Lynn Dell at 5:45 PM

I do hope all your real cows made it all right. It's so hard on them. Drunken stepdad didn't chop stock dams and lost dozens of bred cows one winter. Moron.

Well, snot grass! I wasn't quick enough. Manohman do I love those pictures! I showed the kids. The 6yo really loved the wave.

Well, if the Cow would like to visit Georgia (home of Chick-fil-a!) after Julie, I'm open. Not that we have any cows in suburban Marietta. I do have an Australian Cattle Dog, tho the only thing she herds is the cats. She met some dairy cows once and I think they terrified her. I'm crossing my fingers that all the real cows are ok. Wish there was a way to tag each of them with an RFID or something so you could track them.

I'm hiding out in Florida for a while! I can take her to the RWA chapter (Space Coast Authors of Romance) Christmas party on Sunday. She can have her picture taken with some authors! :)

I decided to send the cow to Julie in Texas by way of Crystal in Alabama, mostly because I already have Crystal's mailing address (yes, I'm that lazy). I wanted to send her to the RWA meeting with Cyndi but I'm afraid she might not get there on time.

Follow the cow by visiting Crystal's blog at the link I posted up above in this blog entry.

Send her here to Ohio. It may not be warm, but we can take her on an Amish tour. I promise they won't eat her! haha

I love the chain cow! What a super cute idea. Where did she come from before you had her?

She'll have to wait to become an international Bovine - I'm coming back stateside for a month :)