This story actually starts long ago and far away. Well, not years and years ago, but a few weeks, on a farm in Ireland. Susan at Stony River has a beautiful farm and a lovely blog, and also had a contest. One of the winners was Carol at Rimrock English Shepherds in Ten Sleep WY. Susan sent Carol a stuffed cow.

Carol came up with the idea of sending the cow on a 'blog tour', visiting ranches around the US and maybe the world. She mailed the cow to me.


I live twelve miles from my mailbox. My mailbox lives approximately fifty yards from the Canadian border at the Del Bonita Port of Entry. Unfortunately, at this time of year it's dark when I go to work and dark when I get home, so I haven't been able to take a picture. This one I found on the web will have to suffice: 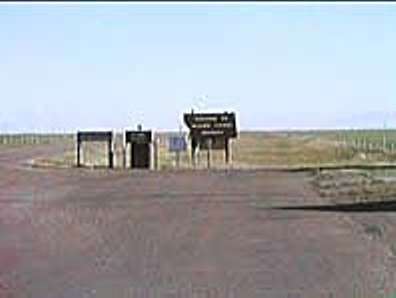 The big brown sign says 'Welcome to Montana'. The silver thing to the left of it is a set of twelve mailboxes for all the people who live out on our gravel road. Go a mile straight down that highway, take a right, drive nine miles west, take another right onto my driveway, go two and half miles north and west, off the ridge and around the curve, and you'll arrive at my house.

For perspective, here's a view of the mailboxes from the Port of Entry office, looking south: 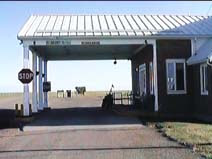 So, back to the cow. Our mailman is not the most reliable and conscientious individual you will ever meet. It's a rare week that we don't get a letter or two that should have gone to one of the neighbors. Or someone we've never heard of. The cow arrived in a cardboard box six inches square. Which are the exact proportions of our mailbox. So he thoughtfully stuck the cow in the mailbox, rather than in the wooden structure to the left of the mailbox where packages are normally left. (No, the package bin isn't locked. Everybody's stuff is put in there together. Looks like several of the people on my aunt's Christmas list are getting gifts from Coldwater Creek this year. Nice!)

Here's the problem with putting the cow in the mailbox. The door at the back where the mailman puts stuff in is six by six, just like the box, and the package. The door we take the mail out of is five by five.

The cow was stuck.

Last night, after retrieving my husband and son off the westbound Amtrak from the Dakotas, we swung by the mailbox. A pocketknife and a few swearwords later, the box was dismantled and the cow is safely cruising around in my Jeep. Sadly, it was too dark for pictures.

She arrived just in time for three inches of snow and subzero temperatures. Looks like the cow is going to need to put on some winter hair fast, or we're going to have frozen beef.

The pace you live (seems slow but hectic as all hell), the distance you travel from the crap most people think is important and your your clear writing style puts a smile on my face and inspires me.

I empathies with the cow and I've been waiting for someone to check the mail for some time now.
Thanks for writing because I, for one, need to read.

Twelve miles to the mailbox is a huge improvement. Until the mid-Nineties we had to drive all the way into Cut Bank for our mail-- 55 miles.

Loved reading this. Puts things into perspective. 12 Miles is indeed an improvement on 55. I didn't realize you were so close to the Canadian border either.Send some snow to uptate NY, it's not Christmas without the white stuff. (Hugs)Indigo

Oh My!! Go offline for a few days and come back to this story. HAHAHA

But 12 MILES!!! My husband won't get a PO Box because we have to drive about 6 miles to post office. As it is, sometimes we forget our mail and it's at the end of our drive (about 60 feet)

My mail would never get checked. Our boxes are just down the sidewalk, and I never check it. Well, that is, until I realize it's been a week or two.

Hope that cow gets some hair. and quick. It's cold outside!