Not So Pretty Woman

A few years ago my husband and I made a rodeo swing through Idaho. We roped at eleven-thirty Friday night in Gooding and one o’clock the next afternoon in northeastern Washington, an eight hour trek. Driving south to north across Idaho is an adventure at the best of times, let alone the dead of night. It involves multiple mountain passes and offshoots of Hell’s Canyon. The hills are steep, the curves sharp, the deer suicidal. We hit Riggins at four a.m.—bless them for letting wayward cowboys camp at their rodeo grounds—and bailed into the camper for a solid four hours sleep. By noon we were rolling across the Washington border, bleary-eyed and rumpled but right on schedule. I dug out my make-up bag in attempt to avoid scaring small children. I suggested to my husband that I might be less likely to poke an eye out with my mascara wand if he would drive a little smoother. He looked over at me and said, in all seriousness, “I don’t know why you bother with that stuff. I didn’t marry you ‘cuz you were pretty.” Luckily, I was too tired to crawl across the console and strangle him. And once the first homicidal impulse had passed, I considered what he’d said and got warm and tingly all over. See, in my husband’s terms, ‘pretty’ equals high maintenance. Hair and clothes and shoes and large chunks of his money and time wasted on all of the above. None of which he considers necessary. When he tells me I look great in a baseball cap, he is not kidding. And let me tell you, when you live on a ranch, a man who loves you in spite of how you look is a very good thing. I always have to laugh when I watch a movie set on a ranch. The women are out chasing cattle in their tight jeans, neatly pressed blouses, artfully tousled hair and full make-up. Yeah, we look a lot like that around here. Except the clothes are generally supplied by Carhartt not Calvin Klein. If I have anything on my face it probably wasn’t manufactured by Revlon. My four year old son has never seen an iron. And the only tousling my hair gets is from the wind. Yesterday was a prime example. Spring has sprung at the ranch, meaning we had six inches of new snow and the temperature was just above freezing. The weatherman tells us we can expect more of the same right up until the first of May. The decision was made that the ‘heavies’ needed to come back in from the pasture (see previous blog, My Dog is Not Lassie). I donned my standard winter ensemble: wool socks, long underwear, jeans, insulated windproof pants, turtleneck, hooded sweatshirt, men’s Carhartt coat, gloves, cap and sunglasses. Believe me, it is not necessary to ask if this outfit makes my butt look big. My summer ensemble is much the same, minus the insulated pants and the turtleneck. On the two or three days a year that the temperature tops the seventy-five degree mark, I have been known to switch to a lighter coat. On the really cold days, I add a neck warmer, knitted cap and a fleece pullover. Back in the house, layers peeled off, my hair was smashed flat, with strands glued to my face and neck by static. My nose is terminally red from sun and wind. The turtleneck used to be navy blue, but has faded to a dark shade of gray with a pair of large bleach spots on the front. My jeans were chosen not for style but for the ability to accommodate long underwear and still allow me to mount a horse. There is a permanent streak of black down one leg from my encounter with a bucket of used motor oil. Washing up for lunch, I got a glimpse of myself in mirror. I remembered that morning on the rodeo road and had to smile. It’s a darn good thing that man didn’t marry me ‘cuz I was pretty. 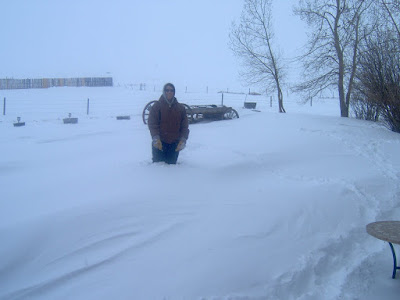 I smiled and giggled through most of this post. Following as of now.

Welcome Crystal. Glad you enjoyed. Kinda tough keeping a sense of humor on the ranching front today, eighteen inches of snow and counting, up to two more feet predicted. Definitely going with the winter ensemble.

Boy do I remember that. The last year I was at the ranch we fed with a hay sled and a team of horses because the snow was too deep for the tractors. It averaged -40 for two weeks without windchill and western North Dakota has wind.

Layers and layers of clothes and my hands still froze to the lines every day. I walked in one day and a young neighboring rancher was in the kitchen. I think even he was shocked at the Stay-Puf Marshmallow girl who waddled in and started shucking clothes so I could thaw my hands out.

the reason i arn't married is very much for this reason! the reality with me is, i will be coming in tired and dirty, having worked all day right along side the men! american men appreciate this u.k men don't!least the ones i have met...where did i go wrong! sadie