THREE WEEKS TO GO--AND ANOTHER EXCERPT 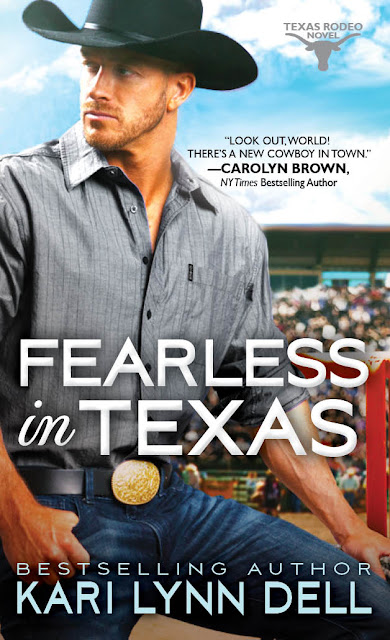 Twenty days and counting until the release of Fearless in Texas, and the early reviews have been awesome, including a coveted star from Publisher's Weekly, who said, "Chock full of drama, romantic angst and magnetic supporting characters, Dell’s latest is not to be missed."


RT Book Reviews raved, "There is such a raw vulnerability in these characters that readers will be hard pressed not to scream, cry and cheer right along with them ... Fearless in Texas will leave you feeling worthy of attaining your own happy ending."

My job this week is to pick out a handful of excerpts for our online promotional tour, and while I'm at it I thought I'd share one of my favorite scenes. As Melanie says about her tendency to hold a grudge, "Every girl needs a superpower."

Wyatt mutilated another lump of the slime-coated goo the café called apple pie filling , then pushed the plate away in disgust and checked the time on his phone. Five thirty-seven. If Melanie was going to commit an act of retribution, surely she would have done it by now. And he still had no idea what he could do to stop her.

Violet had grinned, cocking her eyebrows. “Friends don’t let friends’ wives get arrested. And if worst comes to worst, you won’t have to borrow money for her bail.”

Yet another perk of being a trust fund brat, along with perfect teeth and generations of ruthlessly wielded rich, white privilege. And since he was already here, he might as well give Melanie until sunup before calling this stakeout a bust.

A flash of yellow caught his eye as a taxi pulled to a stop across the street. In a blink, Melanie was across the sidewalk and into the back seat, a swift-moving shadow clad, like Wyatt, in skulking clothes—dark jeans, a black hoodie, and a baseball cap, with a backpack slung over her shoulder. Hell. That didn’t look good. Wyatt fumbled for his wallet, tossed a twenty onto the table, and charged out past the startled waitress, but by the time he got to his rental car, the cab had disappeared around the corner. He made an educated guess as to her destination and was rewarded when he saw the taxi several blocks ahead on the four-lane avenue.

He could follow. Or he could attempt to cut her off. He chose the latter, passing on the left in the generic sedan he’d rented for the occasion, and parked under the hotel’s portico just ahead of the taxi. Then he waited, braced to do whatever was necessary…and hoping she didn’t do any permanent bodily damage.

The yellow cab sailed past the entrance of the hotel and around to the side lot. Wyatt bailed out of his car and started for the front door, intending to meet her at the rear, but instead of heading for the hotel, she hopped out of the taxi at the far end of the lot and paused for an instant to reach under the rear bumper of a Ford pickup. Before he could change directions, she’d climbed in and fired up the engine. Wyatt ducked behind a bush as she roared past and onto the street.

Oh hell. Her version of Don’t get mad, get even was going to involve $60,000 worth of prime American steel. What was in that backpack? Too small for a Louisville Slugger, but there was plenty of room for a can of lighter fluid. Or dynamite.

His crappy rental didn’t even have enough oomph to lay rubber when he jumped in and hit the gas. He spotted her immediately, driving well within speed limit, but he had to hang back several blocks, thanks to the deserted streets. They headed for an industrial section on the edge of Amarillo and…Westwind Feeds? He swore as she jumped out, unlocked the single bar that barricaded the entrance to the parking lot, and swung it aside, her movements as swift and precise as a covert operative on a well-planned mission. Before Wyatt got within a block, she was inside—and he was locked out.

He swore again, then made a left to circle around the block opposite Westwind, killing his headlights as he pulled into an alley between two warehouses. He left the car halfway down and made like a ninja, creeping through the shadows until he had a clear view of where Melanie had pulled the Ford into a slot marked Executive Parking, next to one of the Westwind company pickups. Wyatt paused, then gagged when he made the mistake of inhaling. He pulled his T-shirt up over his nose to filter out some of the dirty-diaper and rotting-fish stench of the nearby Dumpster. If tonight was any indication, it was just as well he’d crossed undercover cop and spy off the list when he’d decided against Yale Divinity and gone in search of a less holier-than-thou career.

Across the road, Melanie was crouched beside the pickup, scrawling blocky neon-green letters all the way down the side of the Ford with a can of spray paint.

She finished, stepped back to admire her work for a second, then grabbed her open backpack and circled around to duck out of sight between the vehicles and go to work on the Westwind pickup. Well, hell. Once again he’d failed miserably, because once again he had badly underestimated her.

A hard lesson Michael Miller was about to learn. You didn’t mess with Melanie and stroll away whistling.

Wyatt flattened his reluctant smile and contemplated the situation. The damage was already well in progress. The best he could do now was to get her out of here as quickly and quietly as possible. He looked both ways and, seeing no sign of life in either direction, sprinted across the street. The hissing of the spray can stopped. He eased up and peeked over the tailgate of Michael’s pickup as she pulled a long security cable from the backpack. Heavy duty, impervious to bolt cutters. Damn. She had thought of everything. She threaded an end through the front wheel of each pickup and wrapped it twice around the Executive Parking sign, anchoring both vehicles in place.

As she snapped a padlock through the looped ends, Wyatt said, “Your P is running.”

She yelped, snatched the nearest paint can, and spun around. Only Wyatt’s superior reflexes kept him from getting a blast of orange square in the face.