Back in the eighties there was a movie called Weekend at Bernie's, in which a pair of corporate-climbers drag their dead boss around a weekend house party pretending he's alive so his ill-timed demise doesn't mess up their shot at networking with the bigwigs. Or something like that. I don't recall the finer points, assuming there were any. I mention this because I had a similar experience last weekend, except with a calf.

And why, you ask, would I spend two days dragging a dead calf around? Well, it's like this...

The calf--we'll call him Bernie for simplicity's sake--was born out in the west pasture, on a ten degree blustery morning, which would have been enough of a challenge. My husband spotted him right away, though, loaded him in the pickup and hauled him in to the calving barn, where we put him in the warming box. He should have been fine.

It was immediately obvious that Bernie's prospects were not good. There was blood in his saliva and he couldn't hold his head up. Probably premature. But we dried and warmed him, filled his belly via a feeding tube, closed up the box and hoped for the best.

Have you ever heard the story of Schrodinger's Cat? A physicist theorized that if you put a cat in a box with a dish full of poison, then close the box, you have no idea at what point the cat will eat the poison and die. Therefore, the cat can be considered both dead and alive until the box was opened and the cat seen to be dead. They call this a paradox. Whatever the purpose of Schrodinger's theory, Bernie was my cat in a box. And I really didn't want to open the lid, because until I did I could pretend he was still alive.

In the meantime, two pens away, we had a calf without a mother, one of a set of twins. Twins are great, except it's rare for a cow to have enough milk to raise both, especially a first calf heifer, so we have to take one off the mother and bottle feed it until another cow becomes available. I took to calling the calf Marvin, short for Starvin' Marvin, because he was a bottomless pit and no amount of bottled milk seemed to fill him up.

So, in one corner we have poor Bernie, recently departed. In the other, Marvin, in need of a cow of his very own. And clear out in the pasture, Bernie's mother, mourning her missing calf. The obvious solution is to bring Bernie's mom in and give her to Marvin. The trick is to convince her to leave the spot where she last saw her calf, and where instinct insists he's most likely to appear again. 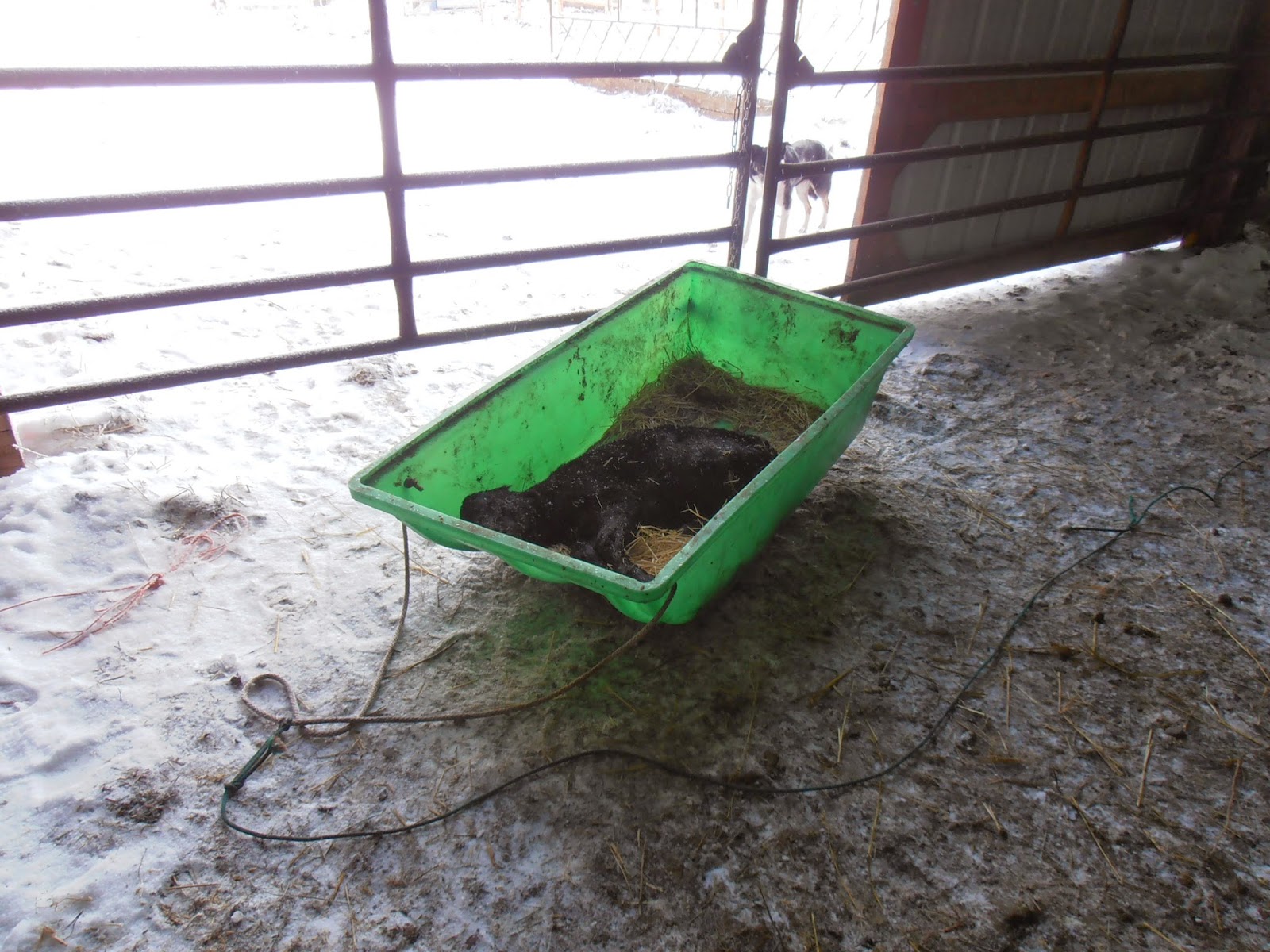 The idea is to load a calf into the sled, let the mother get a good look and sniff at him, then slowly pull the sled to wherever you want the cow to end up, while she trails along following her calf. Works like a charm most times. Then again, most times the calf is alive. But we hoped we could fake Bernie's mom out long enough to get her to the barn.

So I hoisted Bernie's limp body out of the warming box, loaded him in the sled, tied it onto the four wheeler and took him for a nice ride out to the pasture, where I propped the sled up on its side and arranged Bernie so he looked reasonably perky. The cow sidled up, sniffed. I held my breath. It was going to work...

And then she licked him and the sled tipped over and Bernie flopped out onto the ground. The cow took off running. I dumped Bernie back in the sled and roared off in pursuit with Bernie bouncing along behind. My husband joined the chase and much to our astonishment, the cow trotted the half mile straight over to the house and into the barn, possibly due to the shock of being attacked by Zombie Bernie.

Phase one, complete, if not quite how we had planned.

We stashed Bernie and his sled in the corner and left the cow locked up for the night to give her time to settle down. The next morning, we initiated phase two. The part we really don't enjoy. And given that I spent an afternoon giving sleigh rides to a dead calf, that's saying something.

Here's the deal. Cows are wired to let only their own calf nurse. Otherwise, it would be a free for all out there in the pasture, and the smallest calves would starve. Cow recognize their calves by scent and will kick at anything they don't recognize. So if we wanted Bernie's mom to accept Marvin as a substitute, we had to make Marvin smell like Bernie.

In other words, Marvin needed a Bernie suit. (Which always makes me think of Men in Black. "...not Edgar, exactly. More like somebody wearing an Edgar suit.")

There's something very disturbing about skinning a baby calf, even for a good cause. In Bernie's case, it proved to be damn near impossible because the temperature had dropped into the teens overnight and he was frozen stiff. Another ride in the sled, back to the warming box, where we left him to thaw for a few hours. But finally, late on Sunday afternoon... 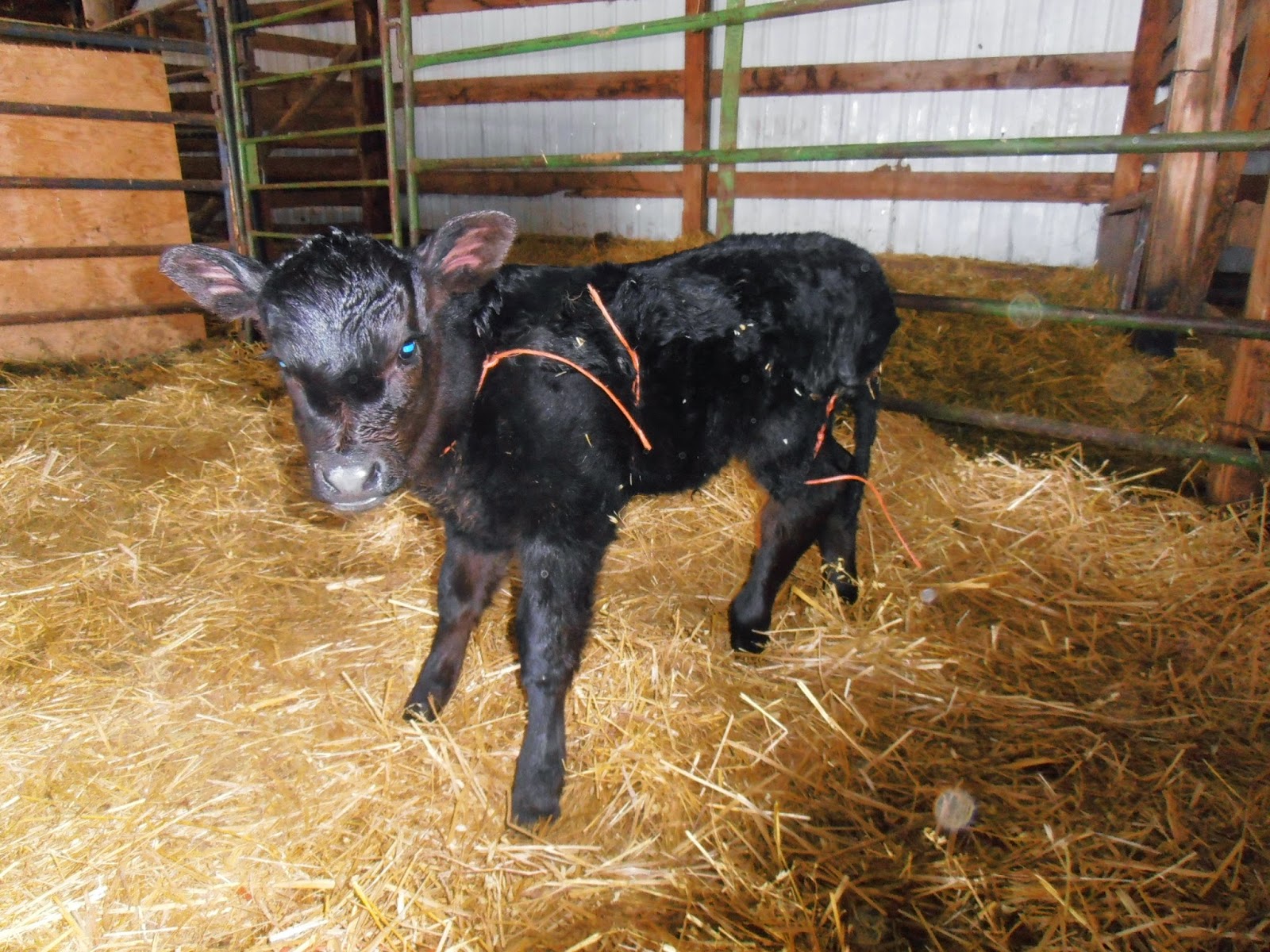 Yep, that's Marvin, all dressed up to meet his new mommy. Who adores him, thank the Lord. After three days, his scent and Bernie's had co-mingled to the point that the hide could be removed without the cow realizing this wasn't her natural born child. So she's happy, Marvin is thrilled and--for the first time ever--full. And Bernie got one last ride in the sled, to the place out back where the less fortunate go for their final rest.

As much time as we spent together, it seemed like a eulogy was in order, but the best I could come up with was, "Here's to Bernie, who always stayed right where you put him."

Wow. In connection with your blog title, that's about as 'real' as it gets!!

Hats off to you for handling such difficult and distressing challenges. I could never be a rancher. Dead animals turn me into a sobbing mess. :( Glad Marvin has a mommy now at least. :)

Is it awful that this post made me laugh?

It’s like the end of Cold Mountain (appropriate) when Nichole Kidman skins the dead lamb for the same reason.

A baby wild horse was born late Friday or Saturday morning (black-and-white pinto). The temps haven’t dipped much below freezing, so I’m sure it’ll be fine in that regard, the real threat being coyotes, bobcats or the mountain lion. The mare is very experienced, and there are two older sisters who huddle close. The stallion is protective and a nice guy, so I’ve got my fingers crossed for the little foal.

I laughed out loud...in the best way possible (Laughter is a balm for sadness, isn't it?)

I had a mare who lost her colt...a big, strong mare with so much milk. We tried using the placenta as a cloak for the nurse foal, but alas, it didn't work. I'll know for next time.

And thank you for your very real, very raw look at life on the range. Well done.

Good thing to do all around - too bad we can explain things to our animals, pets OR livestock. I would be SO much easier.

Oh, my gosh. Been there, done that and hope I don't have to do it again. You do seem to find the humor in any situation. I'm glad to hear Marvin has a Mama.

Okay, I admit it. I laughed at your eulogy. But I still felt bad for Bernie.