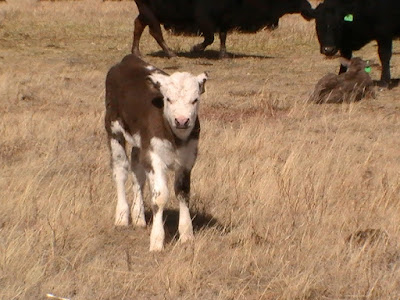 As you might recall, last week I shared a photo of the heifer calf we have designated as Logan's future cow. Among the comments on that post was this one from my esteemed literary agent:

Janet Reid said...
What's Logan naming his calf? My nieces had pigs for 4H and it always cracked me up cause they named them for my sister and her husband. (I think it cracked up the kids too!)


And I replied:
Name pending. Logan does these things in his own time and his own way and naming a cow is not on his agenda yet. When he does it will probably be something like George, since he's named our two female dogs Max and Sam.
Well, it turns out Mom here isn't as smart as she thought, because I was totally off base. He named the cow Frank.

Coming from an Angus mother and a Charolais father, little Frank looks like a perfect Hereford! Are you sure there weren’t other stray bulls wandering around? Your ladies might have a reputation, lol.

I thought the same thing, Darlene. Most of our commercial cows aren't purebred Angus. This one's mother has a white face, so no doubt she's got some Hereford in there somewhere.

We have mostly Angus cows, but some are Charolais/Angus cross. We put Angus bulls on them and every once in a while we get some calves who look kind of like this!

Michelle: We're not exactly sure what this one's mother is, other than black with a white face. We bought her for a roping calf when we lived in Oregon and by the end of the summer she'd grown up so nice we decided to keep her as a cow. Turned out to be an excellent decision, she's the first to calve and raises the biggest calf of the whole herd every year, which is the other reason we're keeping this heifer.