Just a Tiny Bit of Difference

Six years ago we came home to the ranch from Oregon for Christmas. There was almost no snow. The temperatures were in the forties. I went hiking across the pastures and down the coulees and thought, "Wow, this global warming thing is kind of awesome." So we decided to move back to Montana.

Fast forward to March of 2008. For the first time in years, it snowed all the way through calving. We had drifts clear into April. Same thing in 2009, only worse. I didn't start this blog until March of that year, but here's a photo from that month: 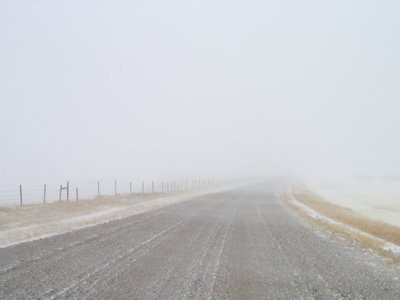 Then came 2010. It got ugly. We had two major blizzards in April that scattered cattle all over the countryside and some of our neighbors had big death losses with their new calves. We were very lucky, only two of our smallest and already feeble ones came up missing and were never found. Everything else survived, even though it snowed and blew for three days straight and when we tunneled out of our house the yard looked like this. And yes, that is our chore pickup just barely peeking out of the drift in front of the barn. 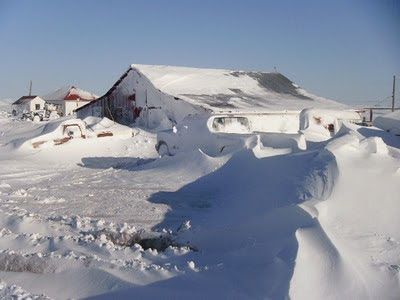 Then came last year. It started snowing at Thanksgiving--cancelling my planned trip to South Dakota, thank you very much--and never stopped. By the time it was done we'd broken all kinds of records and the snowpack in Glacier National Park was so deep they didn't get the Going to the Sun highway opened up until mid July, one of the latest dates ever. Here at home, the yard looked like this in March: 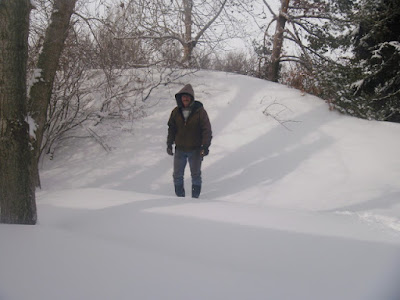 By the end of calving season last year I was ready to pack it up and move south. This was not what we'd been promised during those balmy Christmas visits that lured us home. Well, I'm happy to say good old Mother Nature must have decided we were due for a break, because this winter has been wonderful. We've had snow but nothing like the last four years, and intermingled with warm sunny days that melted most of it away between storms. The yard this year on April 1st? 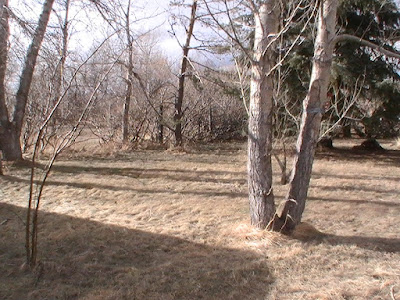 Ahh. Better. There's even a little green grass starting to show. Plus it's been great for calving, which is good because things have been a bit unpredictable this year. Calves started popping out a couple of weeks ahead of schedule. We're quite sure we have a clandestine visit from my Aunt Lorraine's Charolais bulls to blame. Given that we have nearly all black Angus cows and only black Angus bulls, the evidence is pretty hard to hide: 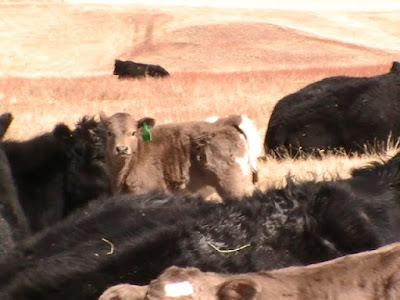 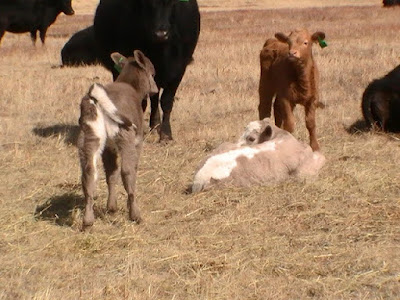 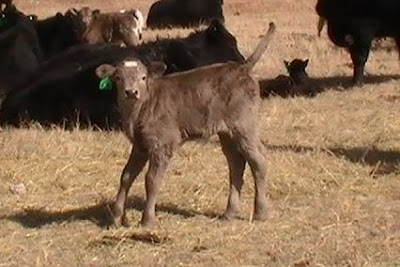 Gotta admit, though. They are danged cute.

When we were kids we each had a cow of our own. When the calf sold in the fall the money went into our savings account. We got to take our little red passbook into the bank and have the lady write the deposit in it and then the new total. I thought I was so grown up and important. I thought it was even cooler when it came time to go to college and all of those calf checks were waiting to help me buy books.

My parents gave us cows with distinctive markings so we could easily pick them out of the herd. Mine was part Holstein and had a couple of white spots. I named her Spotty Blue. When she got old we kept one of her calves, then the next, so all of my cows were her descendants and being part milk cow, they always had big fat calves. I wouldn't be surprised if some of our current cows don't have a little of old Spotty Blue in them.

Out of our crop of surprise Charolais, this is the most special of all. She's out of my husband's favorite of our  herd, and she will be Logan's cow. When we sell her first calf we'll take Logan to the bank, open his savings account and deposit that first check and write it in a passbook that he'll keep in the fireproof safe under our bed, just like my parents did.

And so it goes on. 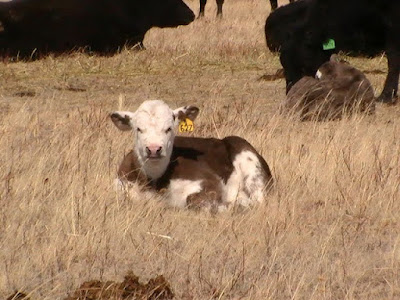 New this week over at Songs and Stories, it's all about the romance. And eye candy. Come and see. And listen, of course. Day-oh.
Posted by Kari Lynn Dell at 5:43 PM

My husband just heard from his son who lives in the Eugene area of Oregon. Eleven inches of rain last month; an old tree fell over from the wet ground. I’m kind of surprised that didn’t make it to you as snow.

I like your last picture: Calf with Tail on End. None of our Holsteins (when I was a kid) did that, nor did the neighbor’s Angus. The Charolaise bulls have been busy. Cute children, though.

Darlene: Yeah, it's been a weird winter. Washington and Oregon have been getting swamped while this side of the mountains is bone dry. At least we've had some decent moisture in the last couple of weeks, farmers breathing a little easier.

And that calf...she was just fixin' to take off running and our calves always stick their tails in the air when they're zipping around. Guess that's where the phrase "hightailed it" comes from.

I know there will be repercussions from the mild winter, but I enjoyed every day! We had one horrible snowstorm in October, and that was it. I'm sure we'll pay for it next year.

My husband has dark hair and eyes, the result of an Italian American mother. After our first two boys were born with blue eyes and red-blonde hair, he wondered if there had been a stray bull visiting his pasture. I then produced his exact replica, just to reassure him.

What's Logan naming his calf? My nieces had pigs for 4H and it always cracked me up cause they named them for my sister and her husband. (I think it cracked up the kids too!)

Megan: Hah. We're the other way around. If it were possible, I would think my husband hired a surrogate cuz this kid looks nothing like me.

Janet: Name pending. Logan does these things in his own time and his own way and naming a cow is not on his agenda yet. When he does it will probably be something like George, since he's named our two female dogs Max and Sam.

You're all tougher than I am if you can handle that weather.

What if there's a fire in the fireproof safe?