*
This post is sort of disjointed because my morning writing session was interrupted by a hike over the hill and across the barley fields and through a couple of fences, a stop to commune with the horse herd and a stroll across the hayfield, all for this: 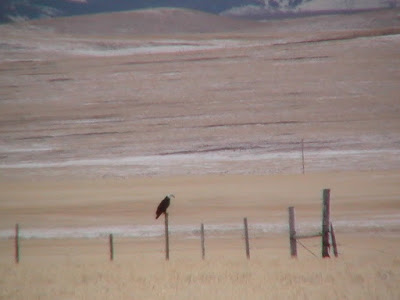 That's as close as I got, at the far range of my camera's zoom, despite a couple miles of stalking. Cagey old bird, he was. For reference, though, that post he's sitting on is about five feet tall. This is also a big bird, folks.

Bald eagles and golden eagles aren't all that rare around here, especially in spring when the gophers start emerging from their winter burrows all fat and sleepy and slow. Because of the damage they do to pastures and livestock (lost one of our best heifers to a broken leg this week) we shoot as many as possible, plus Max has been on a roll, nabbing two or three a day. All in all, a virtual smorgasbord for those who consider gophers a delicacy. Speaking of which, my feathered friend wasn't hunting alone this morning, but the furred one was much more cooperative about stopping to pose (coyote, by the way, not wolf): 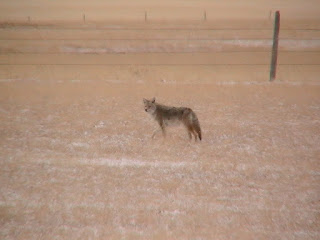 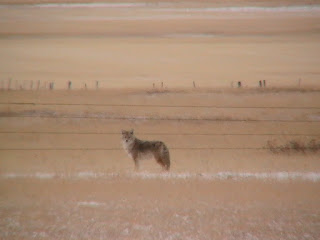 Then we took off just before one o'clock to head fifteen miles down the road to my cousin's place for a birthday party. They are also our third closest neighbor and the end of their driveway is the school bus stop. There are many things I love about my family, hauling the horses along to sneak in a quick roping practice session after the birthday party being right up there on the list.

All total we were gone maybe four hours. So of course it started to snow, and of course three cows immediately popped out their calves, bless their simple little minds. All three had to be wrestled into a plastic tub one at a time and dragged in under the shed that I then bedded down a good foot deep. Between a generous coating of amniotic fluid and the finely chopped straw, I emerged looking like I'd been dipped in egg whites and rolled in feathers. And that was just the beginning of the chores.

We're finally in the house and if not exactly feathered, I am definitely tarred. (Say it with a southern accent. You'll see what I mean.)

Also check the songs and stories page, where I'm explaining why the best book Louis L'Amour ever wrote isn't a western. 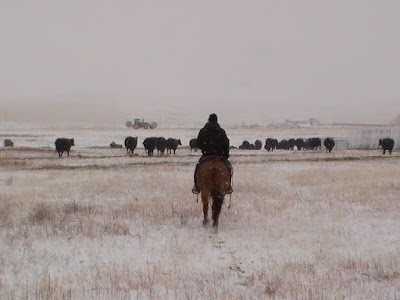 And one of the few advantages to the constant wind...we have very few mosquitoes.

My oldest will be so impressed! He loves all animals, but holds a special place in his heart for eagles and wolves. We don't get wolves here (northwest New Jersey,)but we do get coyotes. One ran across our driveway a few years ago--it was the highlight of our year.

Is your furry friend a coyote or wolf? Eh, I'll just show Boy One the pictures and he'll tell me!

Megan: Coyote. Believe me, I'd have a whole different attitude if I found a wolf hanging out in the middle of my horse herd.

I was driving between Reno and Carson City on a cold, windy February day, and saw a newborn foal looking shocked and huddled against its mother. I felt so sorry for the little thing, but it wasn’t my property, and I continued on my way. They seem to survive, though.