Yesterday we ventured up to Lethbridge to eat our weight in barbecued ribs and wash it down with ice cream in honor of Greg's birthday, which was actually today but after an hour of chores out in the bitter east wind he decided maybe yesterday was a good day to go to town.

We managed to make all of our scheduled stops at various points around Lethbridge without taking a single wrong turn. No small feat given it's a city of 84,000 otherwise mild-mannered Albertans who all drive like their wife is in labor. Give us another five or ten years, we'll have that place figured out.

Back in my school days we underwent a battery of aptitude tests to determine our inherent talents and guide our career choices. I scored especially well on a section called 'spatial orientation', the ability to envision your position relative to the world around you in both two and three dimensions. In other words, I have a pretty good sense of direction.

With this skill and a decent map I have managed to navigate Dallas, Houston, Denver, Minneapolis, Spokane and Seattle with minimal unplanned detours. Even the winding bridges and tunnels of Portland gave me only occasional difficulty. There is, in fact, just one city that has consistently defeated me. 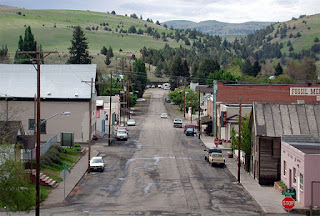 See, that's the problem with Fossil. Nothing is straight. It's down in central Oregon, in the maze of dry coulees just east of the Cascade Range. Driving there is like rolling down a tunnel that folds back on itself time and again, so by the time you arrive you're barely able to tell up from down let alone east from west. As a result, despite my best efforts to convince it otherwise, my brain insists the sun rises in the west in Fossil.

As if that wasn't bad enough, we never arrived in Fossil in the daylight. Our rodeo schedule always worked out so that we roped in Homedale, Idaho the evening before, arriving in Fossil at around three o'clock in the morning, bleary-eyed, too tired to persuade my brain that no, really, the rodeo grounds are on the left side of Main Street even if that seems completely backwards.

So every time I would turn right. And every time we'd end up on some unpaved dead end back street, trying to turn around in the driveway of a single wide mobile home while their pit bull chewed the lug nuts off our horse trailer.

I may be slow, but I am not completely incapable of learning. The last time we went to Fossil I was ready. No matter what my brain tried to tell me, I would turn LEFT. We arrived earlier than usual, a few minutes before two in the morning. Went straight down Main Street, dead set on turning LEFT.

Then Greg said, "But aren't those the arena lights over there?"

I looked where he was pointing. Yep, there they were, four big overhead lights, blazing bright. But wait. They were on the RIGHT. Hadn't we learned that was wrong? Except this was Fossil, for crying out loud. Population four hundred and seventy-one. How many facilities would have that kind of wattage?

So I turned right, climbing three blocks up a narrow side street, veering around a pair of women helping each other stagger home from the bar. Nothing looked familiar, but the bank of lights was just ahead so I kept going, which is how we happened to emerge onto the brightly lit field at the exact moment the LifeFlight helicopter popped over the hill and began to descend…right on top of us.

Horses don't like helicopters much. They proceeded to try to dismantle the trailer, prompting one of the drunk ladies to climb onto the fender to soothe them. By the time we scraped her up, dusted her off and sent them on their wobbly way the helicopter had taken flight again.

We pulled onto the field and turned around under the curious gaze of the ground ambulance crew, drove back the way we came and across to the rodeo grounds, located as always on the left side of Main Street. Six months later, we moved to Montana and I never had a chance to redeem myself. The score remains, Fossil-6, Me-0.

I have a pretty good sense of direction IF I pay attention. Otherwise, I'm staggering around like an old, fat drunk lady. But even I know better than climb on a fender of a horse trailer with the horses all upset!