A while back I took votes on what you'd all like to see on video here. The Snow Saucer of Doom won, but Haystack Jungle Gym came in a tight second, so here you go.

A couple of words of explanation. We've been going through a bunch of snow/melt/freeze cycles that have turned large patches of what is normally earth into solid ice. You could literally skate down our driveway in the mornings. Plus, we've had winds pushing the eighty mile an hour mark, which have whipped up enough dust to turn some of our snow into mudbanks.

The day we took this video it was in the high thirties, which meant it melted just enough to put a nice glaze of moisture on top of the ice. Then the wind blew. Which is why our action hero is having so much trouble making headway in the opening clips.

Watch it through to the end. I'm sure there's a moral in here somewhere about never giving up, thinking outside the box, yada yada. I'll let you come up with your own. Me, I just giggled.

Now for the good part. If you come here often, you've probably noticed a trend with my background music. The first week in December we went to a dance in the big city...also known as Del Bonita. We were lucky enough to be entertained by Trevor Panczak, whose music you've been hearing. I am generally not a real fangirl, but wow, was that a show. I was content to just sit and listen all night. (Also, it's been so long since my husband and I went dancing we've literally forgotten how, so we took pity on the others and stayed seated).

And of course, I got my hot little hands on his latest CD. Autographed, too. 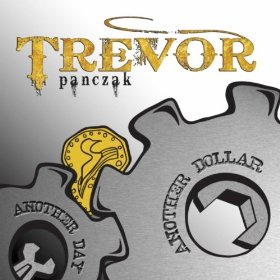 And yep, I'm giving it away.

Two ways to win. Or you can do both and double your chances. First, the usual, post a comment here about how much you love country music, or snowdrifts, or haystacks. Or really put yourself in contention by admiring the obvious superiority of my genetics. Second, pop back over to Twitter if you're one of those people, and tweet the supersecret hashtag.... #trevortown. (No, I'm not going to force you to spell Panczak correctly. Or even say it.) As is happens, that's also his website, which you'll find here. Trevortown

Entries close this coming Saturday night at midnight. I'll draw the winners whenever I get around to it on Sunday. One person will get the autographed CD. Two more will get a free download of the CD from Amazon.com. Since shipping is nominal, I encourage any of my international readers to enter.

Each of the bales in that stack weighs around fifteen hundred pounds, and are mostly alfalfa. They are stacked three rows high--three across the bottom, then two, then one on the top. And no, we don't let the kid run around up there without supervision. Or, my husband informed me after watching this video, ever.

Guess I better go take that ladder down now.

Oh Kari, I'd forgotten all about the haybales and snow drifts! We'd play on those things for hoooouuuurrrssss.

Now you need to post a video sledding behind a tractor :)

Have you ever heard of the Railbenders? Rockabilly - so good.

www.railbenders.com Go. Listen! Let me know if you like 'em!

Hey, I used to giggle so hard at my kids' wrecks on their sleds, I had trouble finding them in the lens! Didn't win me mother of the year award... but they're still good for a laugh. Since I'm enjoying my Shane Yellowbird CD you recommended... I'd love this one too! yayrah!

That looks like so much fun! And I do love country music and hay bales. Snowdrifts? Only if I don't have to shovel them. ;)

Awesome. My favorite kind of contest--everybody wins. The autographed CD goes to Laura, who doubled her chances by both tweeting and commenting. And Linda and Carol, I'll be emailing your certificates as soon I remember where I put my AmEx card.