What's in a Name

The Indian wars began centuries before white men arrived in Montana. Assiniboine, Cree, Blackfeet, Crow, Shoshone—all separate nations competing for their chunk of the plains, including control of sacred sites and the migrating herds of buffalo, much like a smaller version of the Middle East. Some tribes formed alliances for mutual benefit. Others were engaged in long-standing, brutal conflict.

In the late 1700's and early 1800's, what is now northcentral Montana was divvied up primarily between two tribes. The Assiniboine controlled the area roughly bordered by the current Interstate 15, north of the Missouri River, into southern Alberta and clear out to North Dakota. The Blackfeet ruled the east slope of the Rockies, from west of present day Calgary all the way south to the headwaters of the Missouri in southern Montana.

The Blackfeet were sworn enemies of the Assiniboine because, as one historian stated, the Blackfeet were sworn enemies of everybody, but also because they butted up against each other constantly, following the buffalo herds across the plains. They couldn’t even agree on how to do business. As white fur traders infiltrated the area in the early 1800’s, the Blackfeet traded exclusively with the Hudson Bay Company of Canada, while the Assiniboine practically owned Fort Union.

In 1847, Fort Benton was established in central Montana as the farthest west trading post on the Missouri River. Sometime in the next few years, a band of Blackfeet was attacked near the fort by what we assume was an Assiniboine war party, although that far south Cree were also a possibility. All of the Blackfeet were slain with the lone exception of a terrified little girl named Under Fox Woman.

She was rescued and taken to Fort Benton where she was adopted by the Pambruns. She remained with them until she married Adolphus Joseph Dubray, otherwise known as Tin Cup Joe because he started out in Butte, selling hardware to the miners.

Under Fox Woman gave birth to a child in 1865, a boy named Aleck. The exact date and circumstances of her death are not known, but Joe moved to Sasketchewan with his son, remarried, and had a daughter in 1868, so we can assume Under Fox Woman died within a year or two of her son’s birth. Joe and his second wife would go on to have fourteen more children.

In the late 1800’s Joe learned the United States government was allotting parcels of land on the Blackfeet reservation to tribal members. He sent his son Aleck back to Fort Benton to find Mrs. Pambrun, who testified that he was indeed the child of a Blackfeet Indian. The land allotment he received was east of the Rocky Mountains, along the north fork of the Milk River just south of where it crossed the border into Canada.

Aleck's son and namesake would later be allotted a chunk of property north and east of his father's. We still call this portion of our deeded property the ‘Aleck Dubray’. 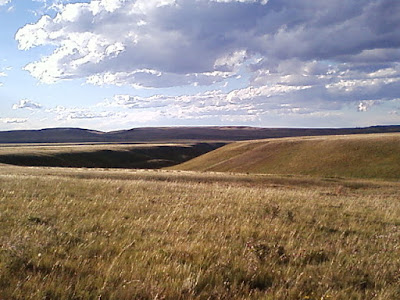 Yes, there was a point to this whole story.

Last week, my aunt invited us to bring our son to a naming ceremony, where he would receive his Indian name. These names are traditionally passed down through families. The last person in my family tree whose Blackfeet name is known to us is Under Fox Woman, so we chose as a name for our son White Fox, or Iks-Sin-Oh-Pah, to honor my great-great grandmother.


There's a lot in a name.
Much as I would like to brag that I know my family history back to front, it would be a lie. I stole it all from my cousin Rhonda Michael. She kicks butt on this stuff.
Posted by Kari Lynn Dell at 5:49 PM

Interesting post. It is so cool you know your family history back that far. And your son has a wonderful name that honors his ancestors. And may I saw that is one beautiful mountain.

Thanks for the personal story and the history lesson. I've been reading a couple novels lately set around Big Sandy. Your photo of the rolling plains under that big sky is beautiful.

very interesting. And I agree that knowing so much about your history is great.

I have mine traced back to the civil war. Having trouble going back further.

Love the name. Love the picture. And jealous that you know so much about your history.

Wow. What a great family heritage! Thanks for sharing your story with us.

Hey all. I added a credit to the bottom of the post. My knowledge of family history is improving, but mostly the credit goes to my parents and my cousin Rhonda.

Wow, how very special! I was given my Indian name "The Girl Who Rides Cows" as a college team nickname (I do not ride cows)... Somehow that doesn't quite compare... How awesome for your family!