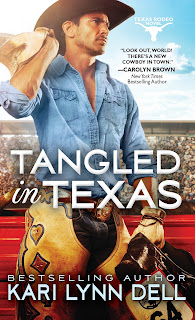 Several reviewers have commented on how Fearless in Texas is much more focused on the relationship between Wyatt and Melanie, and their interactions are more intense than in the previous books. Believe it or not, I did that on purpose.

With each book I try to do something a little different. For whatever reason, Tangled in Texas seems to get the least attention, but for me it has the most complex layering of relationships and emotions and in some ways was the hardest to pull off, because I not only took one of the antagonists from the first book--Delon--and made him into the hero, but turned the hero and heroine of Reckless into HIS antagonists. (You can't imagine how thrilled my editor was when she read the synopsis and realized what I was going to try to pull off.)

It all started with a comment from my sister, who taught elementary school for 30 years. We were talking about dealing with divorced parents, and she said, "It doesn't matter how friendly the divorce was or how much they vow to be civil, the minute one of them gets involved with someone new it gets ugly." So I sat down to write Delon and Violet as if they were that amicably divorced couple whose happy arrangement starts coming apart at the seams when Joe gets dropped into the mix. And then it gets worse when I bring Tori in, who has a justified and deeply rooted hostility toward Violet.

May I just say that there's a reason most romances with single moms or dads find a way to get rid of the other parent? Having to constantly shuffle Beni from place to place and account for why he was with Violet versus Delon at every moment was a real PITA.

On the flip side, one of the greatest joys of writing this book was the relationship between Shawnee and Tori. If they were guys you would call it a bromance. I not only wanted to explore the unique kind of friendships that evolve between uber-competitive, hard-headed cowgirls, but also to have two women whose conversations are almost never about men. I took that idea one step farther in Fearless, with the man ban scene early in the book. Yes, we do all like to talk about boys, but I wanted to write a best friend whose entire role wasn't to be a sounding board or to give advice about love.

I also loved writing Delon and Gil, watching them work through all the pain and anger they'd kept stuffed in their pockets for too long. And now I've circled back to them as I'm writing Gil's book, taking their relationship to a new level as Gil (tiny spoiler) suddenly gets custody of his son and has to look to his brother for support and advice on how to be more than a weekend father.

If you haven't read Tangled, I hope this all intrigues you enough to give it a go. And if you have, I hope I've given you reason to take another look and consider some of those nuances. As always, questions and comments are welcome, our version of online book club.

And if you want to check out Tangled in Texas, you can find an excerpt and order links on my website:  http://karilynndell.com/tangled.html