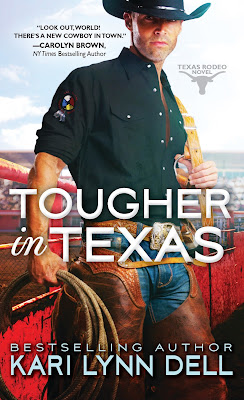 It's almost that time again!

My publisher is getting revved up for the August 1 release of the third book in the Texas Rodeo series, Tougher in Texas. Shawnee is back by popular demand and this time she's butting heads with Cole Jacobs, who may be the only human on earth more stubborn than her.

As part of their nefarious plot to lure you into my clutches, my publisher is running specials on the digital version of the first two books for a limited time. You can grab the second book, Tangled in Texas, for 99 cents, just follow the links on my website to your preferred online vendor: KariLynnDell.com/tangled

Even better, Reckless in Texas is currently FREE as part of a duo with the estimable Carolyn Brown, so you get double for nothing. Visit my Facebook page for details: Kari Lynn Dell Western Author.

Please do feel free to pass the information along to as many friends, acquaintances, and strangers on the street as possible. Every download makes my rankings jump on the websites and fools them into thinking I'm a big deal, which in turn makes them more likely to point readers my direction.

Speaking of revved up, I recently had a conversation with a friend on being on the receiving end of the ol' tractor rev. Yeah, fellow ranch wives, I see you nodding and grinding your teeth. For you and for those who've never had the dubious pleasure, here's a little essay I wrote on subject.

My lifestyle underwent a rather dramatic change after my dad's unexpected illness. Though now that I think about it, that's a ridiculous turn of phrase. I mean, really, who has expected illnesses? Psychics? Time travelers? That guy in your office who always calls in sick the Monday after the Super Bowl? Anyway, after Dad's heart attack I became the number one chore girl, which is a nice change from the desk job. However, since I hadn't been around on a day to day basis, I started out sort of clueless and required a lot of supervision. Which I appreciated. Really. But taking orders from my husband can be--how shall we say?--a bit of a test of our matrimonial bliss.

Communication is the answer, of course, but first you have to figure out the question, like the morning he made a vague gesture toward the west and said, "Load up some bales in the tractor bucket and take them over to the horses."
I was somewhat baffled because I was under the impression that the herd of horses out in the pasture got big round bales, but I dutifully stacked the tractor bucket full of small squares and headed out.

My husband came roaring along in the pickup to flag me down. "Where the heck are you going?"

"To feed the horses," I answered, because, Duh, isn't that what he just told me to do?

"Oh. Well. You should be more specific."

Sometimes, it's a matter of semantics. As a person accustomed to communicating via the written word, I occasionally find the lack of visible punctuation in spoken language troublesome. Thus began the endless loop in which my husband attempted to instruct me to acquire medication for what he referred to as 'heifer calves'. I assumed these to be 'calves who are heifers', when in fact what he meant was 'calves born to heifers'. Which, technically, would be heifers' calves, but he proved to be emphatically disinterested in discussing the finer points of grammar while one of said calves was showing signs of expiring at any moment.

Then there's the non-verbal communication. We have the usual repertoire of arm waves and finger points for when the situation makes shouting impossible. Most often this is because he is driving the tractor and I'm running around on the ground doing the real intellectual stuff like cutting twine on round bales and making sure no baby calves stumble into his path and get squashed.

I do much better now, except when I'm up to my eyebrows in my writing and suffering book brain, in which case expecting me to remember exactly where I was supposed to deliver the fuel pickup and at what time is completely unrealistic, let alone recalling that I was supposed to toss in a water bottle. I swear I do try to listen. I've even taken to making notes on my wrist with a Sharpie and setting alarms on my cell phone to shore up my notoriously faulty memory. Even then, a certain amount of miscommunication is inevitable, so we both try to keep an even keel.

But honest to Pete, if he revs that engine at me one more time…
Posted by Kari Lynn Dell at 6:51 PM