Tiny Home on the Range

Since it's Throwback Thurday, I would just like all of you to know that we are SO far ahead of the curve on this whole tiny home craze. When we moved back to Montana we took up residence in the bunkhouse. Two adults, a toddler, a full grown Border collie in approximately 450 square feet. We survived the first six months with our minds and our marriage mostly intact, mostly because we arrived in the spring and spent a lot of time outside. But there was no way we were going through the winter with the kid sleeping on a futon in the kitchen.
The answer to our fervent prayers was a wooden granary built by my grandfather and mostly unused. Come fall, we shoveled out a pile of fertilizer from one side, a pile of old barley from the other (funny, you never see THAT on the home improvement shows) jacked the granary up onto a pair of telephone poles for runners and dragged it half a mile across the hayfield to set it on the concrete pad we'd poured for a floor.
We learned many things in this process. First, it was easier than you'd think to saw the old floor off and bolt the building to the concrete. Second, these old granaries are lined on the inside with plywood to resist the outward pressure of tons of wheat or barley. And my grandfather was a real over-achiever when it came to nailing on siding and roofing. Which was probably why the building was in such great shape, but we weren't feeling as thankful as we might have while we pulled out those ten thousand nails. Especially when the dust, grain chaff and mouse turds began raining down on our heads.
Also, because like most things the process took a bit longer than expected, I learned that when the temperature is hovering around zero, you don't hold that extra new nail in your mouth. Think tongues and flagpoles. Ouch.
But we finally got it stripped, insulated (six-inch walls in cold, windy country are AWESOME), wrapped in moisture/wind barrier and sided in particle board, at which point we could hack a couple of holes through into the old part of the bunkhouse and triple our square footage. We also added an attic so I could unload the last of our worldly possessions from the tack room of the horse trailer.
After a couple of years of the kid sleeping on a mattress in the living room, we added a wing with another bedroom and a porch, a quick three-year project. And last summer we decided to put on real siding (mostly because my mother was tired of looking at the peeling, faded particle board and offered to pay Dale and Richard Bird to come out and do the work.)
One of these days, I might even get around to doing something with those plywood interior walls.

**Note that the tractor is larger than the original bunkhouse. 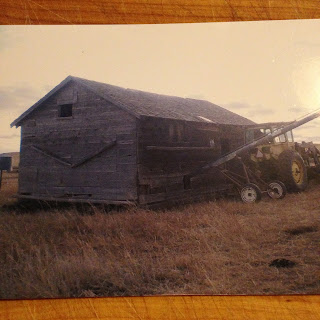 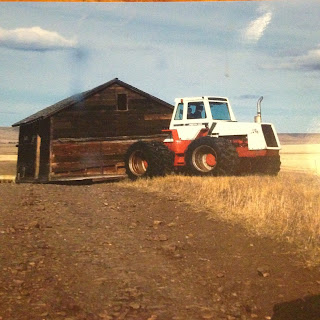 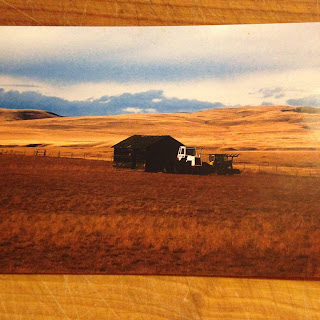 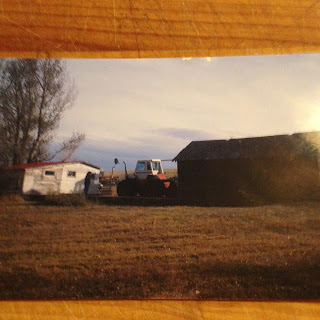 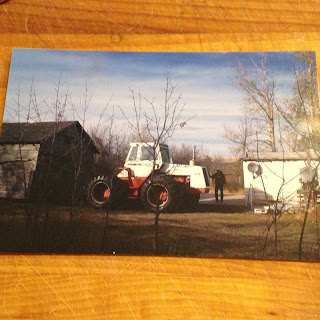 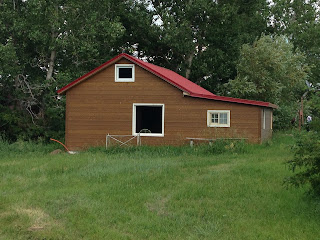 Want more stories of the sublime and the ridiculous out here on the range? Subscribe to my newsletter, Rock Soup for the Cowboy Soul, by clicking on the gold button in the top right corner of my home page:  KariLynnDell.com

Awesome! You can make a home that is comfortable and affordable out of any dwelling. ♥