*Those who've been following along on this blog for a while might recognize this post from a few years back, but due to popular request I've regurgitated it for your holiday reading pleasure. And may I add, this is one of the few stories that I did not have to embellish in the least. In fact, I left out a few pertinent details, including the cup of coffee in one hand, the chewing tobacco and the sheriff. And still we survived.

One of the traditions I do not miss since moving home is the annual Christmas pilgrimage. I've made the trip from Texas, South Dakota and Oregon, through dark of night and blazing sun, ice and sleet and white-out blizzards, but the wildest ride I ever had was right here in Glacier County.

Our car was packed to the roof when we left Oregon: Christmas gifts, suitcases, extra winter gear. We even remembered to put the tire chains in last, instead of at the bottom of the trunk. There was barely room left for three adults, a nine month old kid and my sister's Shitzu (don't even ask).

The first nine hours went well. The roads were good, the baby slept a lot. My brother hadn't eaten anything that generated copious amounts of methane gas. Then came Marias Pass. As we started up the last steep slope to the summit, we hit a snow squall and Greg said a really bad word. The thermometer indicator had suddenly jumped off the dial, the 'check engine' light flashing like Rudolph's nose.

We pulled to the side of the road, steam wafting from the grill. Two miles back, the sun was shining. Now it was snowing sideways. Greg tugged his hat down tight and ventured out to peek under the hood. More bad words. The big serpentine belt that operated everything on the car--including the radiator fan--was broken. Of course there was no cell phone service. Lucky for us, though, this was Montana. The first pickup that came along pulled over and to see if we needed help.

“Jim Jay in Browning has a tow truck,” they said. “We'll call him from the Snow Slip Inn.”

Jim Jay showed up in a flatbed car hauler, mounted on a Dodge Ram pickup. Later I would realize we should have paid more attention to the purple flames on the sides. At the time we were so happy to see him we wouldn't have cared if the flames were shooting out of the tailpipe. Besides, we had a more immediate problem: Four adults, one baby, and a single cab pickup. Oh, yeah, and the dog.

Greg volunteered to ride in the car. He climbed up onto the flatbed and into the driver’s seat. My brother and I and the kid got in the pickup with Jim Jay. Nobody asked the dog her preference.

The road had a thick snow pack that turned to slush as we rolled down off the Continental Divide, at a rate of speed that made my cheeks pucker. Both sets. We skidded around curves and flew over potholes, the car swaying and bouncing up on the flatbed. Jim Jay rammed through the gears without bothering to use the clutch.

“I didn’t realize you could speed shift a Dodge,” my brother said, trying to sound casual through clenched teeth.

“Oh, sure, if you rev it up enough,” Jim Jay said, grabbing a higher gear. “Besides, I have a hard time with clutch since I screwed up my ankle in that last accident.”

Back in the car, Greg tightened his seatbelt. The dog buried her head in a Christmas gift bag. We reached Browning in less time than I could ever have imagined, or desired. When we slowed at the edge of town, I exhaled for the first time in forty miles. Thank God. Still in one piece.

“No sense stopping here, there’s not a repair shop in town anymore,” Jim Jay said. “I’ll take you on to Cut Bank.”

Five miles out of town, the speedometer hit eighty. I knew this because I was sitting in the middle and had a much better view than I wanted. Then I saw the first road construction sign. Forty-five miles an hour, no passing. And there was an ancient Chevy pickup puttering along in front us. We were saved.

“Better get around this guy, he looks like he might actually go the speed limit,” Jim Jay said, and whipped out into the passing lane.

We'd barely cleared the Chevy when the shoulders of the road disappeared, leaving an abrupt, two foot drop on either side. Traffic in both directions was forced to crowd the center, and our flatbed stuck out a foot over the line. Approaching drivers went wide-eyed at the sight of us barreling down on them. I’m pretty sure we left a few spinning off into the ditch in our wake, but when I looked back all I saw was Greg's white face through the car windshield. Then the pavement turned to frozen mud.

The speedometer dropped to seventy. Back in the car, Greg had both hands clenched on the steering wheel, braced for when the tie straps broke and they went airborne. The dog commenced reciting the Lord’s Prayer.

We arrived in Cut Bank in record time and one piece, other than four sets of shattered nerves (the baby thought it was all great fun, but he couldn't see over the dashboard). Jim Jay slid to a stop, released the tie straps and dumped the car on the street, then roared away before we could ask how much we owed him. Greg staggered out of the car, green around the gills, weak in the knees.

The dog made the sign of the cross and kissed the ground. And she's not even Catholic. 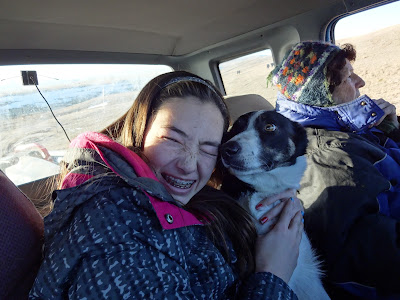 **No, this is not the dog from the story, and obviously this is not my son. I have no pictures of that dog, so we're pretending this picture will suffice. Slurp.