First, a note to the owner of that other maroon Jeep: Sorry about the mud on the floor mat. If I'd realized it wasn't my car I would have wiped my feet. Also, you might want to think about locking your doors.

I have an odd habit of ending up places I didn't intend to be, and not just the interior of other people's cars. More often than not my adventures are due to a certain lack of attention to detail. Usually the result is just embarrassing, but there have been times when it got downright scary. 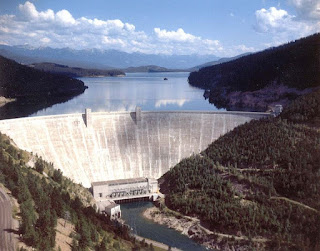 I am not fond of heights. I vividly recall my first encounter with true vertigo, a moment of head-spinning, stomach-wrenching terror when, on a grade school field trip, I looked off the dry side of Hungry Horse dam. The effect was in no way diminished by the fact that I was too short to see over the safety barrier so some helpful soul hoisted me up and--I'm convinced to this day--almost over. I've never recovered. Force feed me a tofu burger topped with goat cheese, but don't ask me to ride in the passenger's seat of a car clinging to the outside lane of Going-to-the-Sun highway.

In my late twenties I moved to eastern South Dakota and suddenly my fear of heights was a non-issue, because there are none. Zilch. That part of the world is so flat the Aberdeen Central cross-country team did hill training by running back and forth across the railroad overpass. As kids if my husband and his brothers wanted to go sledding their dad either had to haul them to the set of over-sized speed bumps on the north end of Richmond Lake that the locals thought were hills, pile up snow with the tractor, or drag them down the road ditch on a car hood at the end of a long rope.

Eight years in the flat land numbed my sense of self preservation, so when we moved to Oregon I was unprepared for actual variations in topography. Since we lived at the eastern end of a minor geographical feature known as the Columbia Gorge, this was problematic. After one all day meeting in Portland I thought it would be nice to go for a stroll, so I pulled off at a roadside attraction called Multnomah Falls. A wooden sign said, "Multnomah Creek, this way."

I suppose it should have been a clue that a couple hundred near vertical yards later my legs were the consistency of micro-waved gummy worms, but no, I didn't realize where I was headed until I stepped onto a tiny, rail-less viewpoint and "OH DEAR LORD I’M AT THE TOP OF A SIX HUNDRED FOOT WATERFALL." 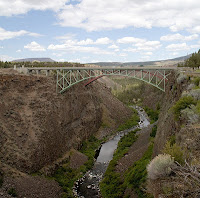 I soon learned that it wasn't necessary to put out that much effort in order to give myself heart palpitations. In Oregon and Washington you don't even have to get out of your car. There you are, driving innocently across a wide desert plain scattered with sagebrush, you cross a little bridge that says Crooked River, look down and "HOLY CRAP I CAN'T SEE THE BOTTOM OF THIS CANYON."

I can only imagine the first poor sucker who chanced upon it in his covered wagon. Hope he had a good set of brakes on those ponies.

Then there's the rest area south of Coulee City where you step out of your pickup, cross a perfectly normal sidewalk to glance over the railing and suddenly understand why they call this the Dry Falls. As in down. Way, way down.

Another rest stop just north of Yakima, same concept. I can't fathom this fondness for plunking parking lots on the edge of rocky gorges. For crying out loud, people, what is wrong with standing at the bottom of the cliff and looking up?

After about a year of these unexpected encounters my nerves were shot, so for our next excursion I chose a spot called the Lake Lenoir Caves. I mean, what could go wrong there? As we were tiptoeing along a ledge, hugging the cliff face while a tour guide pointed out divots in the canyon wall that Washingtonians jokingly call 'caves', I officially resigned as travel planner--at least until we move back to the flat land.
Posted by Kari Lynn Dell at 8:59 PM

I don't do well with sharp drop-offs either. I get dizzy (probably my imagination) and envision falling to my death! Give me a nice HIGH fence to stand behind.