There are two kinds of people who grow grain in Montana: farmers, and ranchers who farm a little on the side. Farmers tally their cropland in the thousands of acres. Ranchers have a piece here and a piece there, wherever the grass wasn't too good to plow under and the ground wasn't planted to hay to hold the cows over for winter.

A rancher and a farmer don't look a whole different. They’re both probably wearing a gimmee cap from a local business and grease stains on their jeans. The easiest way to tell the difference is to follow them to the fertilizer store. If everyone drops what they're doing and trots over to see what they need, they're a real farmer. If they're ignored except for a hand slap when they reach for the coffee pot, they're probably a rancher.

A farmer's combines are huge, still shiny, with air conditioning, stereo sound and a video monitor so they don't get a crick in their neck keeping an eye on the moving parts behind them. They offload into a grain cart big enough to hold half a granary's worth in one load. A rancher putts around the field in a combine the farmer traded in fifteen years ago, dumping into a truck that rolled off the assembly line back when Archie Bunker was the most shocking thing on television.


It's purely a matter of economics. Less acreage means less money to invest in equipment, so the rancher skims by on the bare minimum. His truck has both power steering and brakes, though not necessarily at the same time. Air conditioning? That's just crazy talk.

The farmer spends the winter lovingly tending his equipment, cleaning and tuning so it's in tip top shape and raring to go in the spring. Every hose on his air seeder has been checked, the fittings secure, the electric motor humming. 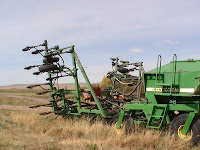 The rancher spends the winter lovingly tending his cows: hauling hay, busting open frozen water holes, and as winter turns to spring, calving. In the rare moments of down time he'd go ahead and tune up his farm equipment but the feed tractor is taking up most of the space in his shop. His seeder is in excellent shape, though, all of the fittings brand new thanks to the crazy Longhorn cow that got out last fall, sprinted across the yard and tried to jump it to make her escape, ripping out every single one of the two dozen air hoses and all the wiring on the motor in the process.

The farmer has a tractor equipped with a computerized GPS guidance system that uses satellite triangulation to ensure his rows are perfectly straight and every pellet of seed and fertilizer are ideally placed for maximum yield.

The rancher's tractor is guided by his wife or whichever of his teenaged children is least proficient at making themselves scarce. The kids have a tendency to wander a bit while driving, thus his grain rows have more of an ocean wave effect. With no electronic alarms to warn them, it's a given the tractor operator will fail to notice they've run out of seed and will leave a big bare strip right alongside the road where the neighbors can drive by and think, "Geez, ol' Bob's not much of a farmer."

Of course he's not. He's a rancher. But I bet the farmer's daughter doesn't know how to repair a granary door with a used Kleenex, duct tape and a busted fence post.

**Addendum: I wrote this article two weeks ago, for my regular newspaper column. Yesterday my husband attempted to haul a load of barley to the grain elevator in the 'new' truck. It started to pull to the right as he topped a hill on Meriwether Road (named after Mr. Lewis, who toured this area less extensively than he'd planned thanks to the Blackfeet). As he rolled down the other side, his momentum given a helpful boost by two and a half tons of grain, the right front tire went completely flat.

Times like this brakes sure would come in handy. As would a spare tire.

***Addendum to addendum: My husband and father would like to point out that it's not like they haven't tried to fix the brakes. They've even resorted to paying other people to try to fix the brakes. The things are remarkably immune to all attempts at repair. And yes, he did manage to get to the bottom of the hill in an upright position.

Oh man, I didn’t want to embarrass Dad with wavy swaths/furrows. He taught me to put the radiator cap of the old John Deere BR on an object in the horizon, and KEEP IT THERE. I actually did a pretty good job.

Busted granary door? I would have gone in Dad’s shop and picked up the biggest hammer…