For all intents and purposes, I've had two rope horses since I started taking my roping seriously. The first was fourteen hands (small, for you non-horsey types), a strawberry roan named Scotty who I got from a family friend in exchange for two old roping calves, the equivalent of $500. The bargain price was due in no small part to her tendency to buck, pull back and be nearly impossible to catch. Five years into hauling her it still took three people to get her into a horse trailer. But hot damn, she could rope. She was my number one mount from just after I graduated from college, through the first ten years of my marriage. She carried me to my first association championship and trophy saddle.

At twenty-two she finally slowed down a gear. We had young horses ready to go, so I passed Scotty on to friends in South Dakota. She carried their daughter all the way through high school rodeo, then they passed her on to friends with a younger kid. As of last fall she was thirty-five and still making their lives miserable.

Enter Ember. She is the exact same size, shape and general temperament except for the bucking, and not by coincidence. Her mother was Scotty's sister. I wouldn't say the transition was seamless, but within three years after the switch I had returned to the competitive level I'd achieved on Scotty. Then we exceeded it. I can say without reservation that the best winning streak of my entire rodeo career was thanks in a whole big heap to Ember. Em is for magnificent. Magic. Roping on her is so easy you wonder how you could ever miss.

Unfortunately, the one trait she didn't inherit from her mother's side of the family was invincibility. Ember is thin-soled and front end heavy which tends to make her get sore-footed easily. Plus early in her career she stumbled in bad ground at a rodeo in Kamiah, Idaho and tweaked something up in her left hip that took her out for the rest of that season and has been a problem off and on since.

A minor problem for her--just a slight short-stride in that hind leg--a huge problem for me. Because she and Scotty are so much alike, I essentially roped on the same horse for twenty years. Switching to a really different horse was not easy, especially when anything else you climb on is taller, longer strided, with more head and neck between you and the calf. Luckily Ember's stints on injured reserve were short--until we moved back to Montana.

Six months after we arrived she came up lame, and this time she didn't shake it off. I started playing rope horse hopscotch. Sweetgrass, Nico, Julie, Vegas. All of them perfectly good horses. None of them Ember.

A year and a half later, in early spring, Ember came sound. I was over the moon. I bought my association card, started mapping out my schedule. Our first rodeo run she gave me a throw so fast and easy I sailed it over the calf's head like a frisbee in my excitement. No worries. Plenty of rodeos to go.

Then the first week in June I came home from work and my husband met me in the yard with the grim kind of face that makes your stomach turn inside out.

"One of the other mares kicked Ember. It looks pretty bad."

It was. Her leg was swollen the size of a fence post from her hock all the way to her hoof. The same rear leg that had always given her trouble. Though we didn't have x-rays taken I'm fairly sure there was a fracture because six months later her ankle was still swollen, with a big lump on the outside. But the day she got hurt? That day I knew she was done for at least another year. Maybe forever. That day I took off walking across the open prairie. I walked for miles and I cried for most of them, mourning my lost season. Ember's pain. All the lost seasons ahead. I was convinced I'd never rope on her again. I'd lost my magic.

For two years it looked like I was right. Her ankle stayed swollen, her stride stayed jerky. We gave up hoping she'd get back to the arena and tried breeding her, but she didn't carry the colt to term. It looked like Ember would be living out her days just hanging in the pasture. In the meantime, my roping had gone down the tubes. I went an entire summer without placing in a rodeo. Tossed my ropes in a corner and quit after the second weekend in July.

The next summer was slightly better. I settled on Julie and we made a couple of decent runs. Then over the winter I got back on Vegas and we started to click. Placed at the first Senior Pro rodeo of the year, and again at a the third. I got a little of my mojo back.

Then this spring Ember made the mistake of letting me see her run.

Well, now. That hitch in her stride? Still there, but a lot less noticeable and given the fact she was going hell bent for leather and showing no sign of pain, obviously not a big problem for her.

Thus began the Return of Ember. We started slow, just leading her for exercise, then easy riding, then after two weeks I tried roping. The very first calf we ran she worked like she'd never had a day off, and I roped like I'd never been on another horse. The magic was back.

We made our competitive comeback at the end of June. First two runs we roped in 2.6 seconds. (With two broken barriers but let's not get picky. Besides, we still got a check on the second one.) By the fifth rodeo we were close to our old form. In a four rodeo stretch after that we got two firsts and a third, and would have had another win if not for that damn barrier. This is one of those runs, at Nanton, Alberta: 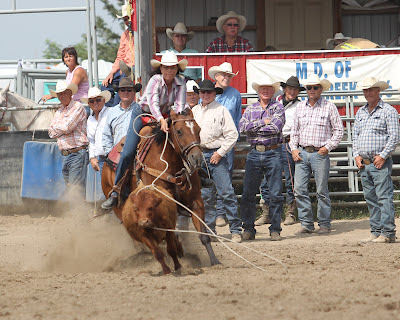 So what have we learned from all this? Not much, to be honest. I knew exactly how blessed I was when Ember was at her best, and I knew it would be pure hell when I was forced to change horses. Now she's nineteen years old, a huge chunk of her prime lost to injuries, but there's no sense shedding any more tears. I'm just going to treasure every calf we rope with the full knowledge that she's only got a limited number of runs left in her aging legs. I keep Vegas on reserve, tuned and ready, and ride him at rodeos where I feel the conditions don't suit Em. I'm going to pamper her as much as she'll let me, spoil her as much as she wants.

We're going to stretch that magic as far as it will go.

***Addendum: As it turned out, Em got sore toward the end of this season, and I had to do the right thing and retire her. Our last rodeo was the Canadian Senior Pro Finals, and we won first place on what I knew was going to be the last calf we roped together. Yes, there were tears shed out back at the trailer that day.

But now it's 2020 and she's still hanging out in the retirement pasture with her former rodeo warrior friends, at the age of 26. Or is it 27 now?

Aw, man. You got me kind of choked up here. Long may you and Ember be a team!

Love the picture! And may you and Em kick some calf butt for years to come!

I think you're lucky to get one really great horse in your life. You've had two. So did I and I wish I had them back.
Don't you find the great ones often have difficult personalities? Have fun on Em as long as you can.

You and your crew (horses included) are amazing. You should be proud.

Cyndi and Linda: Thanks. I'll be happy if we get through the end of this season. Then we'll see where she's at come spring.

Stephanie: As a family we've had an embarrassing riches of horses. Scotty's sister Betsy was better than either of my mares. She could freakin' fly.

Darlene: Thanks. I've never won anything worth mentioning on a horse we didn't train so I guess I'm lucky we seem to be good at it.