Yes, I'm back mid week again, this time with an even rarer bird. Last Thursday we had the privilege of making a quick foray into Canada to see one of the men who made cowboy poetry and humor the thriving genre that it is today. Baxter Black made an appearance in Pincher Creek, Alberta, two hours from here at the ranch counting the time it takes to clear customs (and we slid through with a mere five minutes to spare before they locked the gates for the night on the way home).

I am not good with walking up and talking to anyone--including members of my own family let alone someone to whom I give credit for helping me develop my own comedic style. I was hoping at best to maybe shake his hand and get a book signed after the show.

We walked in at a little after seven only to find that we were apparently the only two out of approximately three hundred people who didn't arrive at six for dinner. Everybody else was already seated and there was a local talent revue happening on stage. Yeah. Awkward.

So we were standing there wondering what to do and where to sit and a man walked up, stuck out his hand and said, "Hi, I'm Baxter. Glad you could come. You look a little lost. Just sit up there in the chairs to the left of the stage and when we get started I'll have you slide to the middle so you can be front row center. Where are you from? Are you sure you don't want dinner, looks like they've got enough left over to feed half the town."

So much for having to work up the nerve to introduce ourselves. And look. I have proof. 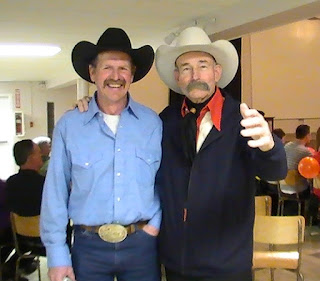 Isn't he cute? And Baxter's not bad, either.

For more on Baxter Black go to BaxterBlack.com. And for a sample of what I learned from him, I've got a post over on the group blog: Killin' Me with Wellness.

That is so nice! I love hearing stories like this. Restores my faith in human nature. :)