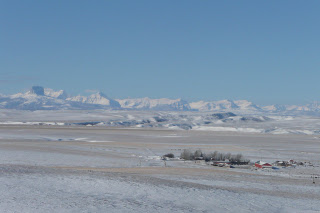 Today you get pictures, because my cousin sent me some fabulous new ones that I have to share. This is our ranch, looking west and slightly north. Those are the Rocky Mountains, of course, with the big square one being Chief Mountain. The Canadian border runs just to the right, along his base, so Chief and everything left of him in the photo are in Glacier National Park, and everything right of him is Waterton Park in Alberta, Canada. 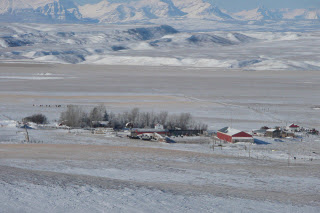 Here's a slightly closer view of the home place. You can clearly see two of our most prized possessions. The first is the big red thing to the right. That's our indoor arena. Almost a must if you're serious about training horses or roping in this part of the world.
The second is the trees. Look at both pictures again. Notice how many trees you see besides the ones right behind our house. Yeah. Precious commodities out here on the barren, windswept plains. Emphasis on the windswept. It works up quite a head of steam rolling down off that mountain front. There is no quicker way to  get yourself in big trouble around here than to mess with the trees.
Just ask the porcupines.
And in case you get the impression from these pictures that we live on a big flat plain, here's a view of the place looking south and east. It's a gain of two hundred feet in altitude from our house to that little black spot in the upper left corner of the picture, which is a pair of granaries. This ridge is the edge of a large plateau about three miles in diameter. My cousin was standing on top of it to take the first two pictures. 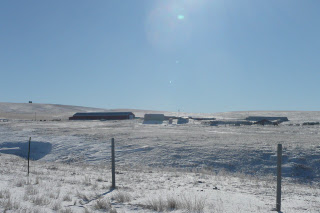 Wow. Whichever way you turn, it's like looking at a painting. So beautiful.

Linda: I don't think we've had as much snow as you have this winter. And I have a 4WD for driving and a tractor for shoveling the driveway.

Anonymous said...
This comment has been removed by a blog administrator.
1:02 PM

I saw that Glasgow has a record amount of snow, and that they're worried about the Milk River flooding in the spring. Are you folks in any danger?

We have a lot less snow than Glascow. This last storm we only got an inch and they got five. It's been like that for the last six weeks..we keep just catching the back edge of the storms. And believe me, we're not complaining. \
The Milk River is two miles from our house and in the bottom of the coulee at the base of that big ridge below the mountains. We do get snow melt running off the hills and into the basement of Mom's house sometimes, but that's about it.

Had me fooled. I thought the first pics were from an airplane. Thanks for posting these. Yeah, them trees gotta be important.

Throw a glass dome over your ranch and you'd have one heck of a gift shop snowglobe. Perhaps something to consider when you start thinking about the merchandising opportunities associated with your writing. Some other suggestions? A line of "Montana for Real" heavy-duty panty hose, salt licks, and sod-scented lip balm.

People pay a lot of money for marketing advice like this. So, yeah, you're welcome.

Looks like a great place to be a writer. I enjoyed these a lot. So, so different.

How beautiful is your place? It is breath-taking. You know looking at all the barns and everything I feel like i might have seen your place, but know I haven't. So amazing!