The whole New Year's thing seems to beg for words of wisdom, especially with this being the end of the first decade of a shiny new century, though we seem to have managed to smudge and dent it up pretty good and it's lost the new millennium smell already. Still, if I must impart sage advice, let it be this: Do not let 2011 pass without eating fry bread and Indian tacos at least once. You'll be a better person. Or at least happier.

Which explains why I'm having a very happy New Year's Day. *burp*

Although technically I am from Cut Bank, I actually live in Del Bonita, a name given to our general area as a nod to both the local port of entry and the gathering of houses just on the other side of the border in Canada, which gets to call itself a town because it has a post office as opposed to our rack of mailboxes at the border crossing. Though we are scattered over a ten mile radius, we Del Bonitans have a strong sense of community, developed through decades of having our own country school (now closed)…and because the majority of us are descendants of or related by marriage to one of two families. Or both.

The community as a whole usually gathers at least twice a year—a summer barbecue and a Christmas party. Plus sometimes there’s a harvest dinner. And weather permitting, someone usually throws a New Year’s Eve party.

People think I live in the back of beyond, but compared to where we went last night, I’m practically an urbanite. In honor of our hardy little group, I developed the following checklist: 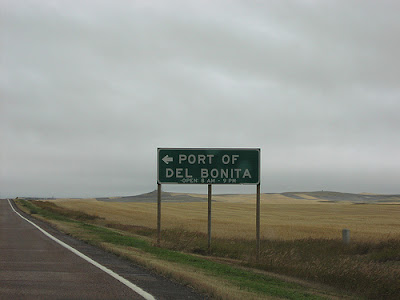 How to tell you’re from Del Bonita
1. New Year’s Eve party invitations are not issued until at least noon on December 31st, as the host must determine how bad the road is drifting before inviting a large number of people out to get stuck in his driveway.

2. Party preparations include making sure the block heater on the tractor is plugged in, in case you misjudge #1.

3. The invitation includes, “And don’t forget, right before the first cattle guard, take the track to the right that swings out across the hayfield. It’s a little rough but the snow’s not as deep out there.”

4. The only vehicle you encounter on the way to the party is a border patrol truck and he waves because he knows only a local would be on this road in this weather.

5. During the party, attendees periodically wander outside. Not to smoke, but to check and see if the wind is coming up, which is the cue for everyone to scatter or risk becoming long term houseguests.

6. Conversation during the party will include at least one observation that bears seem to be powerfully attracted to dog food.

7. Instead of party favors, the host offers charcoal-activated handwarmers to departing guests.

8. You have no fear of being picked up for driving impaired on the way home, but be sure and hide those contraband Mandarin oranges you snuck down from Lethbridge in case the border patrolman is bored to the point of wanting to stop and chat.

Enjoyed this. Brought back memories from boyhood of Nebraska blizzards. Taking the route across the field instead of the driveway through the shelter belt was also a must.

This reminds me a bit of driving home from high school basketball practise in the late 1940's. When we turned off the the highway we left the ranch road immediately and took the path of least snow resistance always bearing for the yard light at the foot of the mountain. We had 7000 unfenced rocky acres to choose from in our journey.

Love this post!
My town is located near the Mexican border. Although we do not have a post office we do have a general store that carries all the necessities, food, hardware, fresh pizza and liquor.
I am new follower to your blog and happy that I found it.
Have a great 20111

We end up cutting across that hayfield above the house for at least part of every winter, because it blows bare on top.

PIZZA. Around here, the closest thing to fresh pizza is the monthly visit from the Schwan's man with his ice cream truck.

You know, the more I hear about Nebraska, the less I crave moving there. At least I don't have tornadoes.

and yep...bears (and raccoons and mice) all love dog food. I can attest to that fact.

Greg and I laughed out loud - sounds like a good How To Tell You Live Near Babb checklist, too! Happy new year.

We were at Ralph and Raenell's place. You've probably had bees there. So, yeah, we were pretty close to Duck Lake.

I LOVE frybread; we had some for our solstice/Christmas celebration at a friend's house a couple weeks ago. (The rest of our friends have never been to South Dakota, but ever since I made some for them after spending a month there, they order it online and make it every once in a blue moon. :) )

May all your trips around the prairie in 2011 be safe ones!