Some of you who've been hanging around this blog for a while have probably noticed that I'm not writing as much as I used to. This is at least in part due to a shift from four to five days a week at my day job starting last spring. Part due to trying to finish a book that refuses to end. And part because of a phenomenon known by writers as 'apple picking'.

See, when you first start writing a blog, you have a lifetime of material to work with. It's easy pickins, like plucking the apples off the lowest branches of the tree. The longer you blog, the more you have to stretch and work for stuff to write about, even when you live on a ranch where the humans and animals sometimes seem to live to provide fodder for humorous stories. At the point where blogging crosses over from fun to work, if you're me you have to start wondering why you're putting quite so much time into something that doesn't pay particularly well. Or, um, at all.

But I also appreciate all of you who do stop by regularly and love to hear from you in the comments, and since I don't expect everyone has read everything I've ever posted, I've decided to do a "Back Up" post once a week, in which I go back to this time last year and see what was happening and share my favorite post from that week.

So here we go. Approximately one year ago, plus a couple of weeks. Imagine my surprise to learn that we were all in a state of Spontaneous Confusion. 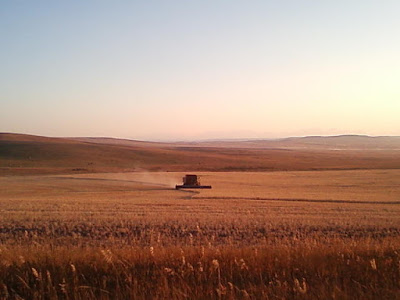 This year? That field is still green, thanks to late snow storms that delayed planting and a cold, wet summer. 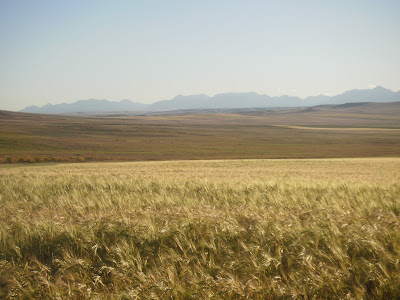 Here's hoping the decent weather will hang on for at least another month, or we're going to have a whole lot of barley hay.

I like your apple picking metaphor.
Best wishes in finishing your book!

I've just started this on my blog too. I even sound halfway intelligent when my husband wonders what we were doing last year at this same time and I -for once- can answer him correctly! I think my readers enjoy it as well, many of the old posts get new comments!

Carol: It is one of the cool things about blogging--a built in diary.

I've been blogging only since May, but for me the blog has been an extension of my research into early western fiction. Therefore, a good daily discipline. When I include reviews of western movies, I'm looking at an endless supply of "apples."

BTW, when I worked at an agency, they were referred to as "low-hanging fruit." Ha.

Ron: As long as you're enjoying it, blogging is worthwhile, and you do a wonderful job on the movie reviews. I'm just finding that throwing an extra work day into the mix has really pinched the amount of time I have to spend on writing, and I have to ration it more carefully amongst the blog, the novel and other commitments.

It's not exactly accurate to say I don't get paid for blogging, since some of my blog material is a replay of my newspaper columns. Because of the column, I have to put out a new humor piece every other week. And because I did blog three or four times a week for that first year, in a pinch I can mine old blog posts and revamp to fit my column requirements.

I know what you mean about blogging being so easy in the beginning, and becoming work, if enjoyable work ... I'm getting to that point with mine, too, though in some ways the extra effort makes me love tending to it all the more. Keep up the great work on yours!