As usual, an anniversary has whizzed past while I was busy doing something else. Lord knows what, from the looks of my house. But yes, as of Monday it has been one year since I started this blog. I am baffled as to how an entire year could have passed without a single mention of my Uncle Rex.

First off, he’s not really my uncle (Yeah, those of you who’ve been following along for a while are stunned. The rest of you might want to read Relatively Speaking). My grandfather (George) and Rex’s father (Bish) were brothers. His mother was Lily, star of one of my very early blogs (Lily’s New Car). All of which makes him my mother’s cousin and some kind of cousin to me, not my uncle, but he is the same age as the rest of my uncles and his daughters are the same age as me (In Dee’s case, almost exactly. She beat me by a couple hours.) It just sounds right to call him Uncle Rex.

Rex is a cowboy. A rancher. A wild horse breaker and a cowman of the truest ilk. I could probably devote an entire blog to his adventures. Trouble is, I hear most of these stories second and third hand, so by the time they get to me, even the cast of characters may have changed. However, there are those who claim some of Rex's stories are at least slightly embellished to begin with, so let's not get too hung up on historical accuracy. Consider this a highly fictionalized version of events related to me by my dad.

The whole thing started innocently enough, with Rex and Ricky, another of the true blue cowmen of our area, out driving around, checking cattle on Rex’s summer lease. They came across a big old high-horned cow dragging what appeared to be a new nylon rope. Obviously, someone had roped her and she’d escaped.

Rex wasn’t too concerned that the neighbor’s cow was eating his grass, but he couldn’t let a perfectly good rope go to waste. He and Ricky contrived a plan whereby one of them would drive up alongside the cow while the other stood in the box of the pickup and roped her. Rex climbed in the back of the pickup. Ricky got behind the wheel. The cow eyed them with a mixture of contempt and suspicion, but held her ground. 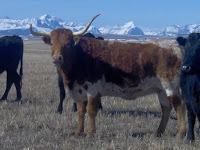 In retrospect, the two cowboys would admit they’d have been a lot better off if she’d high-tailed it for the brush. Or if Rex had missed. But no. His loop snapped right around those big old pretty horns. Rex tied it off hard and fast. The cow hit the end, whipped around, and glared.

Ricky jumped out of the cab and climbed up to join Rex. Together, they stood in the back of the pickup and studied the cow. She stared back, blowing snot and shaking her head.

“Wee-elll, I guess we just have to get the ropes off.”

The cow pawed up a clump of dirt and flung it twenty yards or so off into the brush.

“Any idea how we’re going to do that?” Ricky asked.

Rex pondered it for a bit. “How ‘bout you distract her, and I’ll grab the rope.”

Ricky contemplated the cow’s wide horns and the tinge of blood in her eye. He knew exactly what would happen the second he stepped out of the back of the pickup. But she was tied with a good, strong knot. As long as he could stay one step ahead of her, at some point she’d run out of rope.

He jumped down. The cow bellowed and launched herself at him. He sprinted around the front of the pickup, the cow in hot pursuit. She took a swing at him and punched out a headlight with one of her horns.

“Grab the rope!” he yelled over his shoulder.

As they blasted alongside the pickup, Rex bailed off like a steer wrestler, one arm around the cow’s neck, the other reaching for the rope. She skidded to a stop, ripped her head back and clocked him upside the ear. His hat went flying. Small galaxies exploded behind his eyes. He lost his grip and fell in a heap as the cow wheeled around to finish him off.

She froze, torn between stomping Rex and goring Ricky. Rex speed-crawled a few yards, scrambled to his feet, and took off. The cow went after him, smacking the rearview mirror as she passed. They rounded the front of the pickup again, the cow gaining fast. She’da had him dead to rights except the slack in the rope hooked under the bumper and broke her stride.

Rex threw himself into the pickup box and landed in a heap beside Ricky. The cow rammed her head into the side panel a couple of times, then backed off to the end of the rope to resume glaring and snorting and flinging dirt.

Rex reached into his pocket, pulled out his knife, and cut the rope.

They watched the cow stroll away, now carrying a rope and half, her version of battle trophies. When she was at least half a mile off Rex climbed down, retrieved his hat, and turned to study his pickup. The driver’s side mirror dangled by a single bolt. One headlight was smashed to smithereens. The whole side was caved in, and a corner of the front bumper was crimped.

Rex knocked the dirt from his mangled hat and mashed it onto his head. “Now we go to town.”

Later, they regaled another of their cowboy friends with the tale.

Gotta respect a cow who can take down THREE tough cowboys. Go get 'em, babe.

rofl Oh, yes. Sometimes things seem so simple when they first skitter through your mind.

But the last line, ROFL what a kick!

Thinking back 50 plus years it sounds like a normal day at the office for Montana ranch hands that I knew. Your style of relating it sort of tidys up the details and brings a clearer view of this adventure.
Thanks for keeping me entertained with new stories that tend to release old memories.

LOL! Guess cows aren't all the placid beasts they appear to be when I see them on TV.

Great story, Kari. If you have more about Uncle Rex, don't hold back.

That is a great story.

Fun story, Kari, and you tell it well!

Our NY dairy cows here are so docile, LOL -- this gave me a whole other picture...

Not all cows are quite like this one, even in Montana, but we have a couple I wouldn't want to throw my rope around. I'll have to arm my husband with a camera so he can get some footage once they've had their calves.

Who said real cowboys were a thing of the past!