Yesterday my son and I made a run for pickup parts. Generally, we get them in our hometown, or maybe down in Great Falls when someone hauls cows to the sale. But this particular pickup has reached a vintage when it is generally much cheaper to buy used parts, and being a popular model, they're easy to find. Especially if you're willing to cross the border.

Southern Alberta is about ten times more populated than northern Montana. I assume this has something to do with the fact that while Americans consider us the frozen tundra, we are still south of the southernmost part of western Canada. The people north of us live in the banana belt of Alberta.

Oddly enough, this really is true. There is a swathe of southern Alberta extending from the Fort McLeod in the foothills of the Rockies, east toward Lethbridge and clear out past Medicine Hat where they can grow corn and sugar beets and other crops that can't cut it on our side of the border. It has to do with elevation and weather patterns and small geographic feature called the Hudson's Bay Divide that lies just north of our ranch. Rain that falls on our side ends up in the Missouri River, then the Mississippi, then the Gulf of Mexico. A raindrop that wanders a mile north and trickles off the other side of the Hudson's Bay Divide will flow north and east and into--shockingly--Hudson's Bay, clear out in Manitoba or Ontario.

The point of this whole story is that due to the weather and the relatively tropical climate, there are half a dozen towns less than an hour into Canada where we can find things like auto parts. A salvage yard in Raymond offered us the best deal on a power steering box for a 1994 Ford F250 FWD. So away we went.

First, of course, there's that pesky international border to cross. Gone are the days when the people manning the customs offices had been there for twenty years and knew all the locals by sight. Now we have to show passports and birth certificates. They even ask us if we're carrying firearms. Our border crossing is only open from nine in the morning until six at night in the winter, so we can't venture too far unless we're planning to spend the night, or drive an extra hour or two to get home through a different port of entry.

Once across the border, it becomes immediately apparent that no, we are not in Kansas anymore. Or any other part of the U.S. (Those of my followers who are from Canada, Australia and Europe, you are not going to get why the rest of us are amused by these pictures. Feel free to skip ahead.)

First of all, you can drive really, really fast: 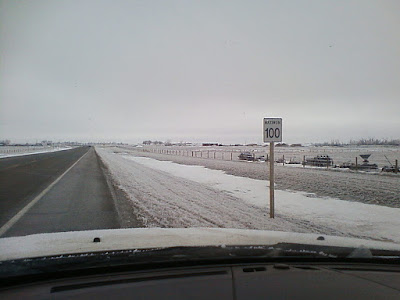 Which is good, because everything is a lot of these 'km' things away: 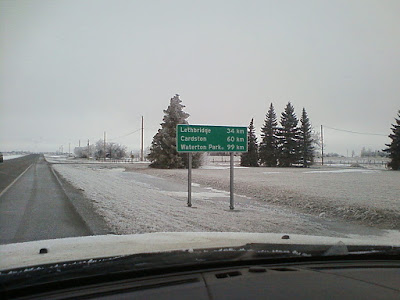 Twenty miles (excuse me, thirty two kilometers) north of the border, the highway passes through the McIntyre Ranch. No hunting of any kind is allowed on the thousands of acres they own. Believe me, these guys didn't get to be six and seven point bucks by being stupid (and no, I can't figure out what I did to make my camera take blue pictures): 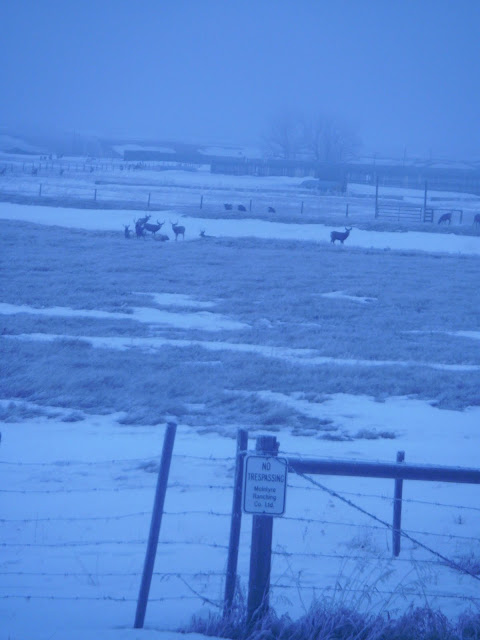 No, they're not fenced in. They're invading the haystacks. Their friend across the road was even bigger: As soon as we reached Raymond, we headed downtown. Southern Alberta has a large Asian population, which means nearly every little town has one of these. And yes, the food was awesome, despite the masking tape on the broken windows. 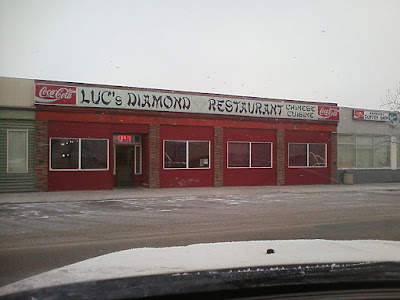 I was more concerned about the parking situation. First off, it was twenty degrees American and raining, which meant the streets were slicker than snot on a greasewood stick. Second, I'm pretty sure the engineer who designed middle of the street parking also owns the local body shop: 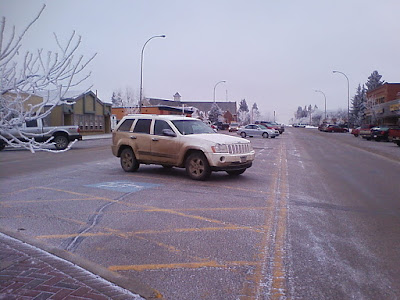 Although I saw no signs indicating such was the case, the locals also assume this center parking area may be used for U-turns at will. But perhaps it's best if I don't get started on how Albertans drive.

Fully stocked with Chinese food, MacIntosh toffee, Coffee Crisps and Aero bars, we headed south. Only one minor stop on the way home: 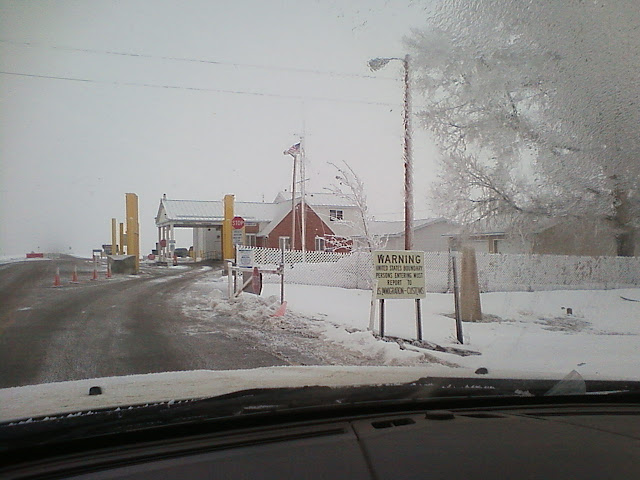 Now, dear readers, I have a question for you. Why is southern Alberta the only place I get this awesome brown sweet and sour sauce on my pork spareribs, instead of that glow in the dark orangey pink stuff they serve at all the U.S. restaurants? 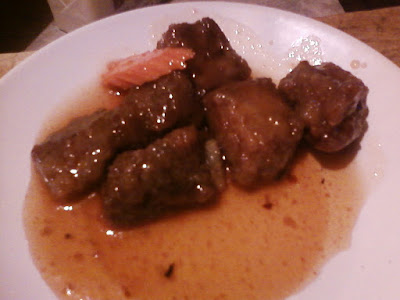 Love the pictures. Wow, I'm Canadian (I'm near Toronto), but that landscape looks foreign to me! By the way, I'm sorry to do this, but I need to point out that the southernmost point of Canada (maybe you meant Alberta?) is Point Pelee, which is about the same latitude as the northern border of California. Sorry for the annoying geographical trivia.

I figured someone would point that out. Just keeping you Canadians on your toes, eh?

Oh, I don't do yucky sauce on any kind of barbecue. Smoke them and be done with it. Of course, I don't like ribs anyway. Pass the brisket, please. However, your trip for pickup parts sounds like an interesting adventure. My son the mechanic is a firm believer in salvage yards. I should write a blog about the patchwork pickup.

ha ha, the sweet and sour is probably made from scratch with stuff like soya sauce and brown sugar, maybe even a touch of molasses? Its the jar stuff with the fancy colors!... Love the Albertan drivers (snigger), we BC Canadians growl at them in the mountain passes... (and they growl at us one those straight flat roads) say no more! Border crossings are amazing aren't they? An invisible line yet so distinct the differences. We drive down zero avenue (on the Canadian side) and look across at scenery that is truly American.

Enjoyed sharing the trip with you and the photos tell the story well, too. I can't add to the barbecue comments because my wife is the best cook in the world and won't let me near the kitchen (but I do the washing up). The weather point is interesting, though. For followers of yours who are under the impression that Scotland is always freezing and rain-sodden, I recommend a trip to Poolewe Gardens on the north-west coast. Thanks to the Gulf Stream, you'll find palm trees and other exotic flora. I used to sail in Loch Ewe and on many occasions enjoyed the magic of the phosphorescence in the water. And the Moray Firth's micro-climate makes it feel like California.

Oh, and I fully intend to steal your expression 'slicker than snot on a greasewood stick' and use it as often as possible.

*sigh* I have to confess. Despite the name, greasewood is one of the least slippery shrubs in the world. In fact, it's sort of spiny, and gets its name because the sap is extremely flammable, which makes it burn like you threw grease on the fire. You can see a picture here: Greasewood

Okay, I'm here for the big bucks you guaranteed on Twitter...oh, wait. Now I get it. Big BUCKS. You tricksy thing, you.

Loved taking the trip with you! The chinese place looked a little scary...you are a brave cowgirl.

You mean you had Asian food that didn't come out of a two-gallon can? Yum.

I came to check out your blog because my mom was born and raised in Montana (but she was a 'city girl' from Billings). Your post made me hungry for Canadian candy, of all things ...when my hubby and I lived in Seattle, we used to go up to Victoria....yummm. Then, we lived in Northern Idaho, and one day we drove up into Canada, and there is NOTHING up that way! Well, gorgeous scenery, but no towns. I refused to turn back til we found "someplace" - and we ended up at this "famous" bottle house - built by some Canadian mortician, I think it was. Lol, thanks for the memory joggin'!