Take Out, or Delivery?

A couple of readers voiced concerns yesterday about what a cow could possibly find to eat in our snow-covered pastures. One person suggested ordering in Thai food. She was very close. Actually, our cows get all of their meals delivered.

We put up our hay in two forms: small square bales and big round bales. The square bales weigh about sixty pounds on average and are used to feed the horses and smaller bunches of cows, where a thirteen hundred pound round bale would be a bit much.

The square bales are tied with twine. 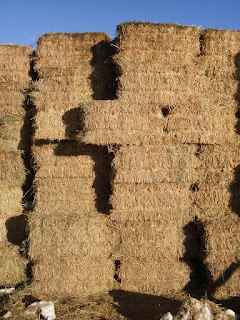 The round bales are wrapped in a nylon mesh. 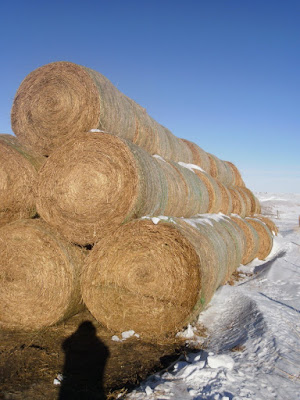 So I guess you could say our cows get 'tied' food delivered. (Well, I thought it was funny!) The delivery guy doesn't drive a van. His rig looks like this: 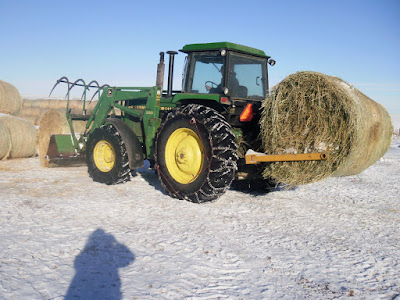 Those yellow arms on the back of the tractor open and shut to release and clamp down on the bale. In this picture it's in hauling position, with the arms clamped low on the bale to lift it off the ground. When he gets out to the pasture, he'll set it down and move the arms up so they're clamped right at the center of the bale. Then he cuts the nylon mesh, peels it off, lowers the bale so it's sitting on the ground, and drives off. The bale rolls out just like a great big sleeping bag: 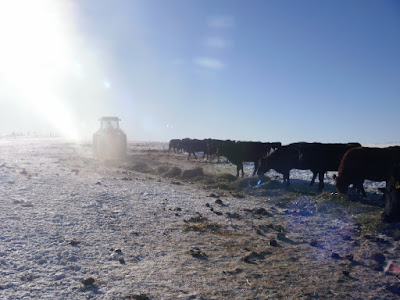 The cows at the buffet line: 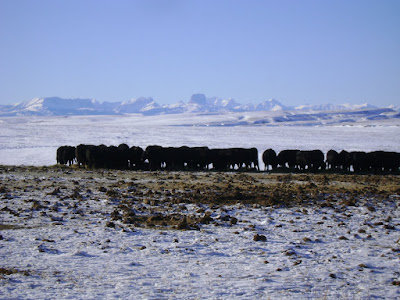 The other option is to put the bale in a feeder, where the cattle can reach in and eat but not stomp in and waste the hay: 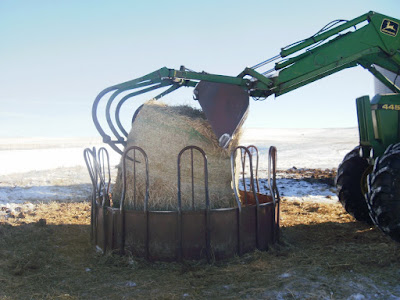 The view from the delivery guy's seat: 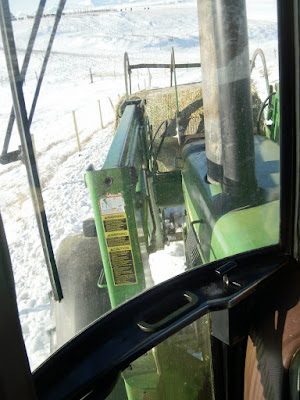 So there you go, a room with a view...all meals included.

Glad to see that the Tie Food is delivered. Do the cows tip? I'd heard about cow tipping but I didn't realize it was a gratuity.

LOL This is great... Cow tipping? My favorite one is from the kids movie Cars:D I laughed so hard the kids were laughing at me!

Why did you move the cattle to this pasture? Isn't it further away from your house? Wouldn't it be easier (i.e. more convenient) to keep the cattle closer to home?

Cyndi: We rotate pastures for a number of reasons. This particular pasture has a deep coulee that provides good shelter during storms and has a good spring that provides water in a;; but the coldest weather. It's also adjacent to a large hayfield, so there's a big stack right there to feed from.

We try to save the pastures closest to home for calving. Not necessarily in terms of grass, but to keep them 'clean'. If cows are kept year round in small pastures the ground will begin to harbor bacteria and viruses that can be deadly to baby calves. So we try to keep them as empty as possible the rest of the year.

After seeing your pictures of how the animals cope in winter - I think that our horses are far too pampered in winter here. Australia - Brisbane, (no Snow) waterproof, filled rugs for night time, with waterproof canvas ones during the day. Yes, 2 visits a day to the paddock through winter. A 10 minute drive as we have to agist them. I might have to print out your pictures & explain to them how lucky they are next winter.