In March, I started writing a book. Something fun and sort of sexy with a few serious moments here and there, about horses and cowgirls and goats and trying to balance the lifestyle we want and the family we need with a career. The kind of thing we all have to deal with somewhere along the line. Except maybe the goats.

Last night, nine months later, after four trips back and forth between me and my agent and two major rewrites, it was officially done. It didn't take me near this long to have a baby (which isn't necessarily a good thing, but that's a whole 'nother story). After sending it on its way to New York City, I emailed the finished manuscript to one of my online writing partners.


She read it in three hours.


It doesn't seem right. It should take longer for someone to read what took me so long to produce. But then I got to thinking--I should be used to this kind of thing. It's been this way all my life.

During rodeo season, preparation to compete starts on Monday. By the time you catch the horses, saddle the horses, warm up the horses, get the calves in, load the calves in the chute, and rope ten to twenty head, then reverse the whole process, you're looking at a couple hours a day. Eight to ten hours a week, minimum.

The weekend arrives. Sometimes on Wednesday (you need to have a fairly understanding boss if you're going to hit the regional circuit). You spend a couple hours packing the camper, loading feed and tack and stuff to keep the kid from making you insane during the drive. Our drives in Oregon were usually at least two hours, sometimes as much as eight, if we were hitting the outside of our range. Occasionally we lost our heads and entered Winnemucca. Or Twin Falls. Or Vernon, BC. Along about hour number eleven we'd remember we were too old for that stuff.

Finally, you arrive at the rodeo. We like to get there at least an hour before performance time. Unload the horses, give them a drink, go to the rodeo office to pay your entry fees and check the stock draw, memorize the number of your calf, check out the times for previous performances, see if anyone has already run your calf and how they did. Go to the catch pen and look at your calf and debate whether it looks like a good one. Try to remember what color it is, in case the chute help loads the wrong one by mistake.

Back to the rig. Knock the big chunks of mud off your horse and pick most of the burrs out of their mane and forelock. Saddle up, then engage in a brief debate about who gets to warm up first and who has to chase the kid around. Lose the debate because the calf roping is always before the breakaway roping. Drag a hay bale out of the trailer and pretend it's a calf. Rope the bale, grab the kid before he runs under the horse at the neighboring trailer, rope the bale, capture the kid as he makes a break for the midway, rope the bale, fish the kid out of the muck around the water spigot. Toss the kid in the camper. Toss in a pack of Oreos and a DVD player behind him. Tie the door shut.

Hubby returns. Bridle horse, ride over to arena. Lope around some. Ride into the roping box. Get off horse and check out the length of the neck rope, try to guess how much of a headstart you're going to have to give the calf in order to 'get out' good. Ride in and out of the box a time or two to get your horse used to it. Lope around some more. Go back to your trailer.

Get serious about roping the bale and stretching (yeah, it takes a lot longer than it used to). The rodeo finally starts. Gather up horse, rope and child and drag them all over to the arena, where you join the rest of the crowd clustered around the back of the roping box to watch the 'start'. Cross fingers and hold breath while hubby ropes. Cuss or cheer as appropriate.

Breakaway roping begins. Depending on your place in the order, either stay behind the box to watch the first few contestants, or mount up and get ready to rope. Ride in the arena when your name is called. Take a few deep breaths to settle the nerves while the calf is loaded and the neck rope is put on. Rehearse the start in your head as you ride in the box. Wait until the barrier rope is hooked behind you. Turn your horse around, back in the corner. Tighten up the reins, wait for the calf and the horse to both stand and look straight forward.

One, two, maybe three or four swings, then throw. Stop your horse. Cuss or grin as appropriate. Time elapsed in actual competition: less than five seconds. On a good day, less than three.

So I sat down and did a little figgerin'. If I go to thirty rodeos a year, average time per run of three and a half seconds, total time in action per year would be 1.75 minutes!

All of the sudden that three hours to read my book doesn't look so bad. 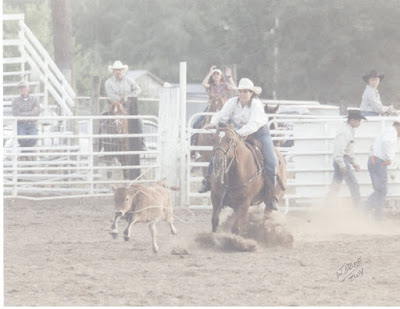 What a great perspective, Kari! I go thru the same sort of thing when I show my horse (AQHA Trail). Probably hundreds of hours, all for a two-minute course, not to mention the money. My girlfriend has been to the AQHA World shows a few times - she figured it out once. Her time in the show arena is about $1,000 per minute.

So when someone tells me they read my book in a single sitting, who am I to complain? At least they read it!

It's the same with Thanksgiving dinner. I cook for two days, a total of at least 15 hours on my feet, not to mention the grocery shopping. Then we sit down to eat and it's all over in 30 minutes and I'm looking at another hour of dishes.

I guess it all comes down to passion and love, huh?

*puts the brakes on*

Oh and those books, I buy in all format b/c they are worth it.

Now I must go back up and read the rest of this post...

Great post. Even 12 hours or just two days, it seems too short for the near year you put into that fabulous story. That's how it always is though, the best and most fun things in life fly by the fastest.

To Anonymous, otherwise known as CPosey: Okay, so I exaggerated a little. That's how it is with writers, making stuff up is what we do. ;))

Thanks so much for your time and your wonderful feedback. It's a better book because of you.

Now you really ARE exaggerating.

It's all about perspective - which can be so frusterating! I think that may be why cowboys and ranchers stay away from doing the math.

Also, I have to say that I'm getting pretty excited to read this book ...