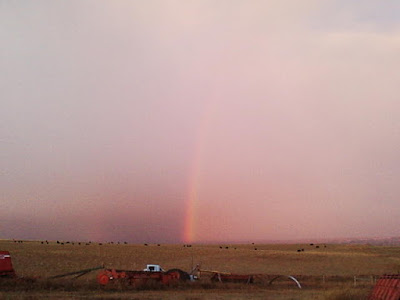 An early morning rainbow in the east may mean good luck. The same rainbow in the west means you’re about to get wet. The front swept down the slopes of the Rockies and met me a mile from the house. I tugged the brim of my cap lower over my face. Nico bowed his neck, slitting his eyes against raindrops that felt like miniature ice picks as we loped square into the wind.
So much for the fifty-five degrees and sunny the weatherman had promised for shipping day.
Didn’t help that we were on what I knew was probably a fool’s errand. Chances that any cattle would be in the west pasture were slim. But I didn’t dare assume. First time I didn’t bother to check would be the time a couple of cows were lounging down in the coulee with their big steer calves at their sides.
So Nico and I fought the wind and the rain across the flat, down through the coulee, up the other side to the top of the rise, so I could see clear to the north fence.
Nothing. 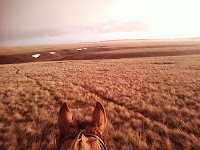 We wasted no time swapping directions and putting the wind at our backs. As we trotted along the fence, skirted a bog, and jogged through the gate into the east pasture, the rain buckled down and got serious. I yanked up the hood on my Carhartt jacket and cinched it under my chin. There was nothing I could do about the icy water pooling on the back of my saddle and trickling down into the seat to soak my butt. My thighs were already wet clear through my jeans and long underwear.
I hadn’t even chased a cow yet.
The John Deere tractor rumbled over the hill from the house, lugging a round bale. My husband, no doubt chuckling and patting himself of the back for agreeing the night before to let me ride instead of driving the tractor. He would lead the way, hoping the cows would follow breakfast right to the corral.

Nico and I started east, toward where I’d seen a cluster of cows clear up on the ridge. Mom was there ahead of me. When I spotted the four wheeler bouncing up the incline through the buck brush, I swung south instead. I should go clear to the road, but the cousins who lived west of us would have driven past on the way to help us, and I figured they’d have unloaded a rider or two to bring anything they saw clear out there. So once I’d reached the point where I could see there was nothing at the far reservoir, I turned north.

Four more riders had arrived while I was making my loop, the cousins from the east. They’d already pushed the cows down out of the draw and onto the meadow. The rain did bring one perk. The band of horses that generally did their best to cause as much trouble as possible was huddled behind the calf shelter, tails to the wind. They weren’t budging. 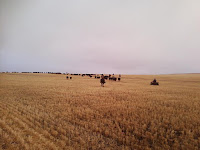 I circled up the hillside and helped Mom push her little herd down to the gate and across the meadow. We caught up with the main bunch as they hit the barley fields. Water beaded on Nico’s ears and trickled down to plaster his mane against his neck. He pushed at the bit, annoyed at having to slow his pace to match the cows. I had to guess the identities of the other riders from their general sizes and shapes, bundled up and hunkered down against the rain. Like me, they’d all dressed for cold, but no one had expected the rain.

The cows moved along pretty good until we hit the corner and tried to turn west. They took three steps into the teeth of the wind and mutinied. By then, my gloves were soaked clear through. My hands turned to cramped popsicles as we all trotted back and forth, shouting and coaxing and cursing at the reluctant herd.
And the rain stopped.
A patch of sky cleared, golden sunlight streamed through. The cows turned, suddenly cooperative. As we topped the last hill, the rainbow reappeared, curving ahead of us, right to the corral where we would sort of the calves to sell.
Despite the wind cutting through my wet clothes, I had to smile. It seemed fitting. Shipping day is as close to a pot of gold as a rancher ever gets. 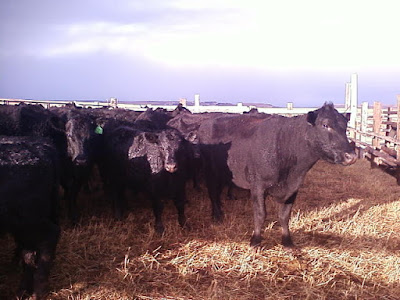 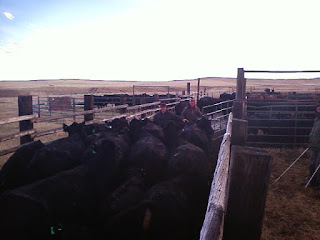 Hauling a load to the scales. 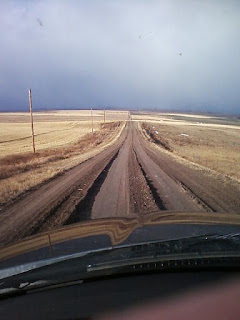 A snow squall hit as I pulled out with my second load. 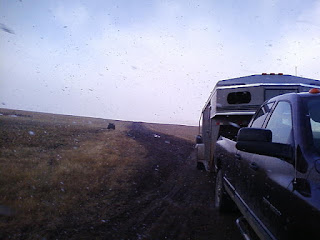 Trucks waiting at my aunt's scales, lined up and ready to head for Nebraska. 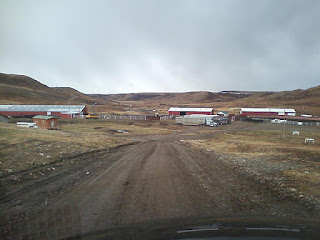 doesn't the noise of a 4-wheeler scare the cattle?

Not a whole lot of gold at the end of the rainbow for heifer calves this year! We'll see how ours do on Friday. I'm not holding my breath.