Once upon a time, I worked as an athletic trainer for a hospital in Pendleton, OR, inflicting pain and fatigue upon physical therapy patients by morning, and providing sports medicine services to the high school and community college in the afternoons, evenings, Saturday mornings, Saturday afternoons, Saturday nights, the occasional Sunday…

You can probably guess why I made a career change. Don't they know there are rodeos on the weekends?

The human resources director at the hospital was a great guy named Jon. Though he’d been a city dweller for most of his adult life, he’d grown up around livestock. So when he brought his family to this nice, rural town in eastern Oregon, he naturally purchased property out in the country. And of course the kids had to join the local 4-H club and get animals to show at the county fair.

Even Jon wasn’t sure why they settled on pigs. But everyone in the family was pleased—with the exception of his very non-rural wife. Even she relented once she got to know the little porkers. They were just weanlings; cute, and funny, and much cleaner than she’d expected. The kids would let them out of their pen to cavort and everyone would sit back and laugh as they played tag and tug of war and keep away with the dog toys and staged impromptu pig races. If the kids occasionally forgot to latch the gate on the pen, well, no harm done. The yard was fenced. Until the day Jon got The Call.

Being a wise man, Jon dropped everything and got home. Where he learned from his frantic wife that the pigs had not only been left loose—they’d discovered the dog door.

This story springs to mind because last week, my dad and I installed a new screen door which features, for the first time ever at our ranch, a dog flap. My mother decided that this might be preferable to having my dog tear chunks of aluminum off the old door when she wanted in. It took one afternoon to show my dog how to push through the flap. Five days later, she’s blasting in and out at will. Mostly in.

Then there’s my mother’s dog. Joey is a house dog, as opposed to my dog, which we laughably call an outside dog. Which does not mean the actual outdoors. It means everything beyond the porch is off limits. Unless there’s lightning, gunshots, or no one’s looking. So my dog hops through the dog door, into the porch, straight to her bed. Voila! Happy dog, intact screen door.

But Joey doesn’t stop at the porch. Joey considers the porch beneath his considerable dignity, unless there are steak bones involved. So once Joey comes through the screen door, someone must still open the door into the kitchen. Which is where we’ve hit a snag in trying to teach him to use the dog door. Because I have to play Howard the Doorman anyway, if he's going to get back to his nap on my parents' bed. So while I’m crouched down, holding the dog flap open a bit to encourage him to push on through, he’s sitting there with a disgusted look on his face.

“What are you, a deck ornament? As long as you’re here, just open the stupid door.” 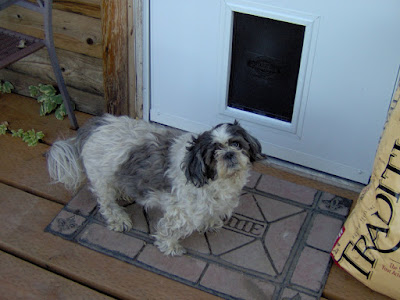 Joey! so cute he claimed our hearts at great falls dog pound that day! his favorite seat the middle front in the pickup - see i remember! just catching up with the blog - brilliant as always, lots of love to you all sadie