Give Us a Little Slack

If you're not a rodeo person, you're probably unfamiliar with the concept of slack. Which, come to think of it, can mean two things. First is the slack in your rope after you catch a calf or steer, which has to be 'pulled', 'jerked' or 'waved' in order to snug the loop down around the animal's neck, feet or horns. Slack can also be missed, which is rarely a good thing and usually ends with either a miss or a calf roped around the belly. The kind of slack I'm talking about today is rodeo slack. Rodeo committees like to keep their performances within a two to three hour time frame. After that, butts start to go numb and beer consumption reaches a point where urinating off the back of the grandstand begins to seem like a good idea. Therefore, performances are usually limited to no more than fifteen contestants per event, more often ten or twelve. The remainder of the cowboys and cowgirls compete in a separate section called slack, held before or after or sometimes on a completely different day than the performances. This is pure, no frills competition. Dozens of ropers, steer wrestlers and barrel racers, one right after another, no breaks for clown acts or those silly bucking events. The following are pictures from the Browning Indian Days rodeo slack, which started, as slack is prone to do, at eight o'clock in the morning. 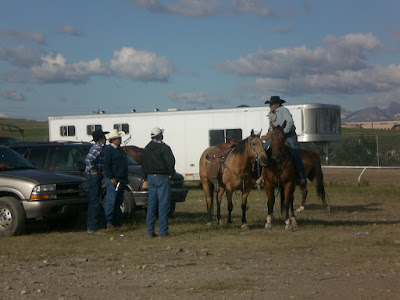 Shooting the bull while waiting for the steer wrestling to start. Love the buckskin horse on the left. 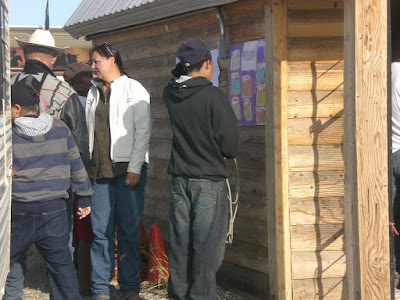 Checking the draw. Every animal has a number, and each contestant has an animal drawn for them by the judges. The draw is posted on the wall of the rodeo office. 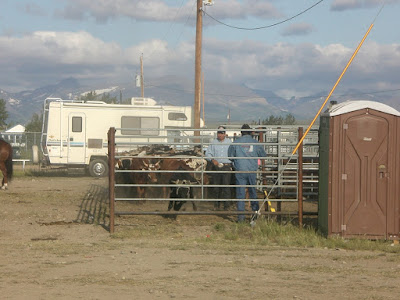 Sorting the steers, making sure each contestant runs the one drawn for him. 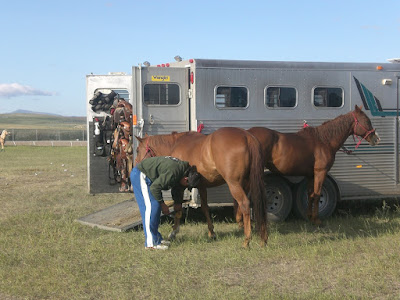 Seven am comes too early to get dressed right away. 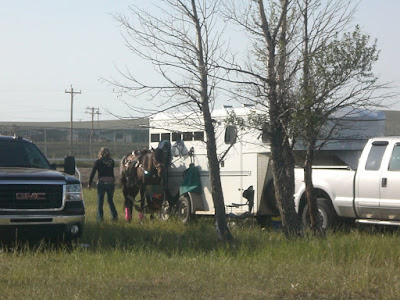 I enjoyed the rodeo photos.

I agree -- the dun on the left in the first picture is a nice looking horse.

I've got a question -- what's the difference between a dun and a line back dun?

A line back dun has a dark line down the middle of its back ;>. A regular dun doesn't. If I can, I'll get a picture for you.