The Hazards of Getting Hitched

Summer has arrived and across the country a familiar scene is playing out in driveways, campgrounds and at boat ramps. Forget money, kids or getting caught eyeballing the woman next door who does yard work in her bikini. Nothing can trigger a good fight quite as effectively as hooking up the trailer.

Unless you’re lucky enough to own a towing rig with a fancy back-up camera, hooking up a bumper tow trailer has an inherent challenge: the driver can’t see the hitch to line it up with the ball on the vehicle. How does one hit this invisible target? One approach is to take a stab in the dark, stop when you think you’re about right, jump out, and trot back to see how close you are.

Back to the truck. Ease into reverse—crap! Foot slipped, jumped back two feet, ramming into the hitch. Inspection reveals that you’ve knocked the hitch sideways, so you’re no longer lined up properly. Back to the truck, pull forward, move left…four inches too far. And so on, and so on….

If your towing vehicle is a forty foot motorhome, congratulations. You will be fit to run a marathon by the time the jet skis are securely hitched to the bumper.

The alternative is to get your significant other to help you. The routine is deceptively simple. One spouse climbs behind the wheel. The other takes up a position near the hitch. And the hand gestures commence. Techniques vary widely. Some perform their duties with the precision of the guy at the airport with the orange wands, guiding a 747 into Gate B-43. Others make vague waving motions that could be directions, or maybe they’re batting at mosquitoes. One person I know goes through what appears to be an elaborate Tai Chi routine.

The difficulty of interpreting these instructions is compounded by the fact that the driver is seeing them in the rearview mirror. In other words, it’s all backwards. Husband gestures to the left. Wife cranks the wheel. The rear of the vehicle goes right. Husband waves disgustly, indicating that wife should pull forward. Wife complies, except he only wanted her to go a few feet, and she’s twenty yards away.

His gestures become increasing agitated as he once again guides her into the general vicinity of the hitch. He makes a circular motion to indicate that she should turn the steering wheel to the left. She stops, assuming he must need to crank the jack down a few turns. He plants his hands on his hips and stomps toward the window to provide verbal clarification. She bails out and meets him halfway. Heated words are exchanged. She points angrily at the driver’s seat. He jumps behind the wheel and slams the door. The scenario above is repeated, with positions reversed.

At some point, whether by luck or skill, hitch and ball will come into alignment. Hopefully before someone slams into the house to divvy up the silverware.

My husband and I have hooked up thousands of horse trailers over the years. The process rarely generates even a dirty look anymore. For that, we have to get the tractor involved. More precisely, the tractor bucket.

Last week we had to move the rollers across the coulee so my mother could roll the northernmost fields. Rollers are a new concept to my husband. He grew up in a place where fields have more dirt than rocks. He couldn’t imagine why you would plant your crops then drag a trio of massive steel rollers across them, so he wasn’t especially concerned when a combination of rain and equipment malfunctions kept us from rolling the grain and hay last year. Then he spent a few hundred hours bouncing across rock strewn fields, prying boulders the size of cantaloupes out of swathers and bailers, and repairing what they’d smashed.

His first order of business after harvest was to repair the rollers.

The purpose of the rollers is to smash the rocks down into the earth, so the equipment can glide semi-smoothly over top. The first roller is hooked onto the hitch of the big, four wheel drive tractor. Two more rollers are hooked to either side of the first, in a triangular alignment. They are held in place by a pin that drops through holes whose orientation must be within an eighth of an inch of perfection. Therefore, you must line up two hitches at once, with zero margin of error.

No marriage is that strong. Instead, we backed the tractor and first roller close to the second two hitches. Then my husband climbed onto the loader tractor to use the bucket to lift and shove the hitches into position one at a time. I thought my hand gestures were perfectly clear. Wave forward to drive forward, palm out for the classic stop gesture, wave back for reverse. Thumbs up for lift the bucket, thumbs down for drop the bucket, and a rocking motion of the hand to indicate tilt.

Except I got confused and gave the thumbs up to indicate that the position was just right, and my husband lifted the bucket, and I threw up a palm to indicate stop but he thought I meant back up, and then I waved back and forth to say “Stop, dang it!” and he thought I meant tilt and the hitch slid off the bucket and dropped to the ground two feet farther from the target than where we started. My husband jammed the tractor into park and bailed out to look for himself.

“You aren’t doing what I tell you!” I protested.

“I would, if I could figure out who’s in charge,” he shot back.

I looked left. Sure enough, my mother was standing beside me, going through an entire set of hand gestures of her own. Which really shouldn't be a problem. When given direct orders by both his wife and his mother-in-law, any intelligent man knows exactly who he should listen to. Right, honey? 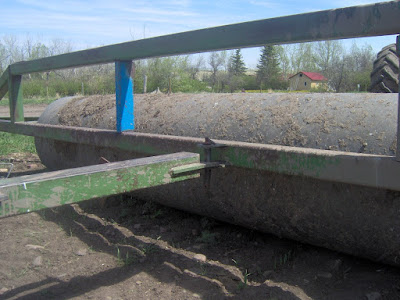 lol... substitute horse trailer hitching and you have our scenarios :)

Hilarious. Yes, hooking up equipment is second only to remodeling a house in causes of divorce. Thankfully, I am not familiar with rollers.

Kitty: That is hilarious. My co-workers thank you for a much needed laugh in the midst of year end rigamarole

Personally, I prefer the stop, jump out, trot, dang!, trot, slip of the foot, bang! approach.

You totally make me wanna try and hack it on a farm.

I really enjoyed this. You have identified the unacknowledged, primary source of spousal conflict.

The same threat to relationships applies from parent to child, as I discovered trying to help my mother back a pop-up trailer up a steep driveway and into a tight garage.

We thought we were so smart, we used cell phones. But the scheme failed us miserably because we'd been trained using mirrors. "Ease a bit left." "My left or your left?" "We have the same left." "Not if I turn around and look at you." "Well, don't turn around. And you should stop now, by the way." She sheered the sidelights off the trailer at that point, and my sister was called in due to my incompetence. Do you suppose my sister fared any better? She did, dammit, due to some completely unfair psychic link between them.

This isn't responsive to your blog but I just saw your first column in the pioneer press. Loved it! I agree that you CAN have mountain withdrawal. I have it too and haven't figured out how to solve it. Looking forward to more blogs and columns!

DOR: That's too funny. We've never tried the cell phone thing, probably because we're too far from anywhere to have a signal at our house.

Juliet: Are you in Montana, or do you get the paper online? I can't believe it would get to you in NYC by mail in one day!

Too funny! I have had the same frustrating series of handwavings and blaming sessions with my husband over our trailer and drift boat. This is really where a pre-marital counseling session would have come in handy.

My sister is a columnist!! (See Juliet's message above.) If you are interested in reading her column, google Cut Bank Pioneer Press. (I hope this doesn't break some sort of blog spot rule!)
Congratulations, Karilynn. Your family is proud. Just don't mention me in any of your material. :-)
Gina

the Pioneer Press is online. I check it out pretty frequently (and will do so more now since you're writing)! Kristin mattocks saw your 1st column and emailed the link to me. I love the net! Juliet

A lot of what you read in the column will show up here first. I've been test driving pieces here to see what seems to get the best reaction. So to everyone who comments, consider yourself a voter! Just like American Idol, isn't it?