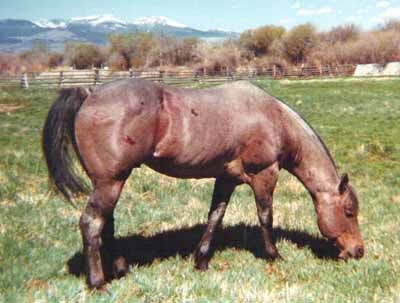 The last roan horse on our ranch will be twenty-nine years old next month. It is, for us, very much the ending of an era. For over forty years our herd was sprinkled with those distinctive salt and pepper coats, and the remarkably hard heads that came with the package.

The first roan was a gelding named Little Ben Bailey. Like all the others to come, he was a descendant of Roan Hancock. And like many of them, he came from the Overstreet Ranch in Ennis, via their stud Osage Roan. The original roan Hancocks were rangy, tough horses, better known for athletic ability and cow sense than looks. Ben had all three. A well-made, compact body and a classy quarterhorse head, filled to the brim with more brains and cunning than any horse needs.

The next roan, a mare named Little Vixen, was just as bad. As were most of the rest. It takes a certain mindset to train roan Hancocks. I was at a rodeo in Idaho once, waiting to rope on a mare named Betsy. A old guy sitting on the fence asked me how she was bred. I told him.

He flashed a sly smile. "Buck much?"

Surprisingly, the answer was no. But Betsy was the one and only exception to the rule, and she made up for that oversight in so many evil ways. As for the others, well, let me just say that I didn't realize until I was fifteen years old that there were people who didn't saddle their rope horses before they were loaded in the trailer to drive to the rodeo. And not everyone arrived two hours early to start 'getting the hump out'.

A sane person might wonder why we continued to buy and raise these creatures--close to thirty at our best count--when there are so many nice horses out there. The answer is simple. In the calf roping, nice horses rarely finish first. It is the most mentally challenging event in rodeo for a horse. They must stand quiet in the box, break and run hard, stop hard when the calf is roped. Then the cowboy jumps off and leaves them to do the rest on their own. It takes a horse with unshakeable confidence and a strong desire to be in charge to stay on the end of the rope, keep it tight, keep the calf under control while the roper ties it.

All that aggressiveness is great in the arena. Not so much in the process of getting there. Through the battles and bruises and long days in the saddle it takes to persuade them to let you pretend to be the boss, there are times when you wonder if it's worth the fight. But one day it all comes together and the answer is a resounding yes.

Roans have faded from our herd for a number of reasons. We came across another foundation bloodline that produced some outstanding rope horses. Maybe we got older and not quite as tough. Mostly, though, it's because roan coloring is a recessive gene. We raised colts from roan mares and roan studs and got a long line of solid bays and sorrels. At this very moment I can look out my window at Pocket and Ember and Bailey: roans in sheep's clothing, one and all. Forget those recessive genes at your peril.

The last true roan is a mare named Tararound Vegas. By rights, she shouldn't still belong to us. Dad had her sold once, to a guy in Canada looking for a roan hazing horse to match the bulldogging horse we'd sold him a couple years earlier. The deal was pretty much done, until Dad entered the team roping at Pincher Creek, Alberta. In those days, every rodeo started with a grand entry that featured all of the mounted cowboys circling the arena behind the flag bearers, usually at full speed. It was windy, rainy, on the cool side. Halfway around the loop, Tara bogged her head and proceeded to put most of the saddle bronc horses to shame.

Oddly, the buyer developed cold feet. Must have been the weather.

Last week I went out to the south pasture and brought Tara in.The spring storms were hard on her, and she's embarassingly thin. I put her in the barn, filled the manger with hay, left the door open so she could come and go as she pleased. The grass around the barns and shops will soon be knee high. There's water, grain, other horses right across the fence. The ideal equine retirement home.

The first time someone left the yard gate open, Tara was gone, straight back to the pasture she came from. You gotta admire the tough old broad. She's gonna do it her way, right down to the end. Typical Hancock.

I remember that day in Pincher Creek when Tara bucked dad off in the grand entry. Marty and I were so embarassed. "Who is that poor old guy who just got bucked off?" I said to Marty in a loud but inconspicuous voice. "I don't know," Marty said. "Never seen him before. Hope he's okay."

Betsy was the best, though. Just like Karilynn said. She didn't buck, but she was pure evil. I was practicing at home one night, because I drew the short straw and got to run Betsy at the rodeo the next day. She rared up and head butted me so hard, I'm pretty sure I had a concussion. The next day, I drew up my last will and testament because I was pretty sure I was going to die. Betsy loved to do the unexpected. We headed for the first barrel at full throttle. I don't remember much about the run, mostly because I think I had my eyes closed. Before I knew it, she had roared around all three barrels, and we won first place. Typical roan. It's either first place, no time, or worse. Near-death! Lola has the best Betsy story, though. Maybe she'll tell it.
Gina

The Betsy stories are coming. And Ben. And Vixie. And Scotty. And Feather. I figure I have enough material for ten years just from the roans. Then I can start on the bucksin mare.