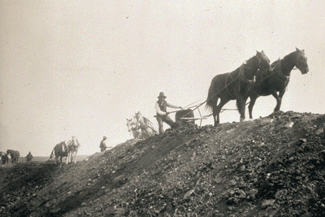 When my grandmother was a girl, the Bureau of Reclamation decided to build a canal that would reroute water from St. Mary's Lake into the Milk River, and via the river, across much of the northern edge of Montana. It was a pet project of Teddy Roosevelt, who liked to hunt and fish the lower reaches of the river and was dismayed that it often dried up completely in late summer.


Huge crews of men and hundreds of horses were commissioned to dig and scrape and haul the dirt. At five points along the way, cement flumes were built to shoot the water down steep hillsides. These were called the drops, and are still in place today.

Drop number five was on land that was part of my great grandparents' allotment from the Bureau of Indian Affairs, and very near their house. My great grandfather acquired a contract to help with construction. And, because their house was so conveniently situated, to feed the crews. Great Grandma Dubray was a stickler about her house…and her kitchen. She ran both with an iron hand. Each day she hauled gallons of water, peeled buckets of potatoes, and baked loaf after loaf of golden bread to feed the ravenous men.

My grandmother Eva and her cousin Grace were pressed into service as cook’s helpers. In the midst of the construction, Grandma Dubray found it necessary to be gone most of one day. She organized the menus for the day and left the two young teenagers with strict instructions for preparation and serving of the meals. Then away she went, rattling over the hill in the buckboard wagon.

The girls pulled off lunch without a hitch. The men wolfed down the food, thanked them kindly, and went back to work. As the girls cleaned up the dishes, pots and pans, they noticed that there was not enough bread for supper.
“We could make some,” Eva said. Grace, always the more timid, was doubtful. “We’ve never made bread.”

They found the recipe and set to work, adding flour and yeast, a dab of butter and milk. Soon they had a huge mound of dough. They huffed and puffed, kneading it smooth as they’d seen Grandma Dubray do it. Then they put it in big bowls and set them aside to rise. Nothing happened. They peeked under the cloth time and again, waiting for the dough to swell, to begin to give off the ripe aroma of percolating yeast. Still nothing.

“We did something wrong!” Grace wailed. “It’s just sitting there.”

Eva eyed the massive lumps of dough with consternation. Mama would be furious if she saw how much flour had been wasted in their failed attempt at bread baking. “We’ve got to get rid of it before Mama gets home,” she said.
They grabbed up the bowls and went outside. Where to dump the incriminating evidence? The hillside rose, bare and mostly featureless, above the house. Nothing on the creek bank was large enough to conceal the white blob. And it was time to begin supper preparations. They had to hide the dough…and fast.

“I know!” Eva cried. “We’ll shove it down some gopher holes.”

They scurried around, tearing off big chunks of the dough and stuffing it into holes around the farm yard. When it was all gone, they hurried back to the house to begin peeling potatoes for supper. Grandma Dubray returned to find supper ready, exactly as she had instructed. The table was set, beans simmering on the stove. The men began to arrive.

One came in with a puzzled look on his face. “What have the chickens gotten into? They’re running around with big lumps of white stuff in their beaks.”

The girls exchanged a look of horror. Everyone trooped out into the yard. Sure enough, a chicken strolled by with a lump of dough.

Grandma Dubray pointed at a spot on the ground. “What in the world is that?”

They all stared at what looked like a giant white mushroom. Someone pointed to another, and then another. The things were popping up all around the yard. Eva and Grace knew exactly what had happened. The warmth of the afternoon sun had finally caused the balky dough to rise…right up out of their hiding places.

Ha! Sounds like something I would have done. Great story. I want to know what happened. Did the girls tell their secret? Did the chickens blow up or die of indigestion? Do tell!

You know, those are the kind of details that get lost over the years. I just know, given what I've heard about Grandma Dubray, I wouldn't have wanted to be in their shoes when she figured out what they'd done!

Unknown said...
This comment has been removed by the author.
11:04 AM

What a great story! I think I probably would've forced my brothers and dog to eat the dough... possibly cooking to beforehand, more likely not.

And then when everyone was sick, I'd smile my innocence: I was just trying to help I love these stories that get passed down through the years - what will YOUR family legend be? Will you admit/share it

I had plenty of 'flops' when I started cooking. Still do occasionally. But my mother is pretty forgiving, so I didn't have to hide the results. Much.