Chief is on the Warpath 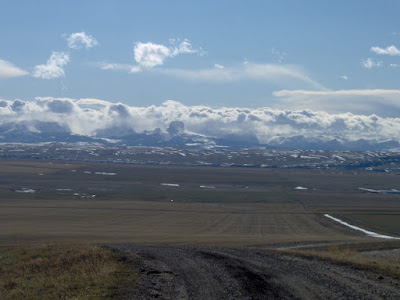 Hard to imagine that this blog has been in existence for nearly two months and this is the first picture of Chief Mountain I've posted. Chief is the square one in the center of the picture. Together with his neighbors, he forms the eastern face of Glacier National Park. I wish my camera did it justice. When you're standing where I was standing, the mountains are about twice as close as they look in this picture. Then again, when you're standing where I was standing and Chief Mountain looks like this, you'd better have a firm hold on your hat. And maybe a fence post. We call those wind clouds. And take note of the wispier stuff around the mountains themselves. Those aren't clouds, folks. That's blowing snow.
Posted by Kari Lynn Dell at 6:13 PM

I miss that view every time i think about it, the road home, i was a agg student with agriventure here, loved the life, miss the life,the place is amazing!
sadie