Calf tagging is a major part of our calving ritual. Soon after birth, each calf gets a quick ear-piercing and a green or yellow tag. Our tag colors are different from our neighbors', which makes strays easy to identify. In addition, each cow has a number, and each calf gets a tag to match. It’s a simple and effective way to keep track of which kid belongs to which mother. I’m surprised WalMart hasn’t tried it. 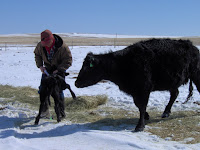 Calf tagging has a high potential for mad cow encounters. We prefer to tag calves while they’re still wobbly enough to catch on foot. Generally, that’s within the first twenty four hours, unless they’re a Longhorn. Then it’s before he dries off. We like to tag calves from the pick-up. When our cows see the pick-up, they think, “Lunch!” When our cows see a horse, they think it’s time to pack up the kid and go. With the proliferation of badger holes in our fields, chasing anything down with a horse and a rope is downright dangerous. Surviving a mad dash through the holes and rocks is only the first half of the battle. Once the calf is caught, there's only me, the cow, the calf, and the horse out in the middle of nothing. Not the ideal situation should a mad cow incident develop. Horses aren’t big fans of mad cows. Their instinct is to vacate the area as soon as possible. They don’t really care if I come along. Mounting a horse that’s running sideways while a cow grinds snot into my ribcage would be a challenge if I were wearing a track suit, let alone Carhart coveralls, long underwear and insulated boots. The pick-up, on the other hand, usually stays put. It offers multiple escape options: bail into the cab, jump into the box, dive underneath. With enough motivation, ranchers have even been known to execute a Bo Duke slide across the hood in full winter attire. A few days ago, my husband, dad and son headed over west to check the cows and tag the new calves. The boy is four. He mostly goes along on these missions to scale down the amount of damage he can do to his grandmother’s house in any given day. Not to mention his grandmother’s nerves. The calf tagging was going well until they came across a precocious little heifer that jumped up and tried to escape. My husband went after her on foot. The pursuit took him a good thirty yards from the pick-up. The instant he got his hands on the calf, the cow let loose with one of those deep-throated bellows that only a mother can produce. She shook her head, blew some snot, and would have pawed dirt if it weren't frozen solid. Seeing a mad cow encounter in the making, my dad turned to jump into the pick-up and roar to the rescue. The boy flashed a toothy grin through the closed window of the locked door. “Say open, Grandpa!”
Posted by Kari Lynn Dell at 12:50 PM

My sister and her husband were visiting for the weekend. Judging by the stories tossed around at lunch today, the Mad Cow Chronicles could go on for months. Next up: "Whoa! I say Whoa!"

Grandpa said open. Grandpa probably also said a few other things that the child hopefully will not repeat in public places.

The only thing better is when the dog steps on the lock button when they are the only one in the pickup. Then, if you are able to get them to step on it again, they usually bounce up and down on it, and make the lock go, "click, click, click, click.." It reminds me a lot of a childhood game called "keep away." I swear the dog is laughing the whole time.
Gina

This is the boy's latest game. Locks Greg out every time he gets out of the pick-up. Greg figured he'd solve the problem by leaving the door open. Logan climbed down, pulled the door shut, rolled up the window then locked it. This is why we always kept a spare set of pickup keys in the camper when rodeoing.

Raenell sent me a link to your blog. i grew up on a ranch, & i miss it. everything that is, except for the wages, the dirt, the hours... :> thanks a lot.

Gina is sure correct about the dog locking the truck. Crystal locked Lola, Richard and I out of the truck at the rodeo in Foremost. We had to break in by way of the rear sliding window. Then of course we couldn't lock the rear window for the remainder of the weekend, which included Viking and Shelby. Oh, and it was pouring rain the entire time. So much so they finally cancelled Viking, after we got so dang stuck that they had to get a tractor to pull us out, aaahhh, good times. Marty

Oh, and that was when the buckskin mare had decided not to allow you to tighten the rear cinch while standing next to her. She would stomp and kick at you, remember? Gina won't, she doesn't remember anything. I had to tighten it while seated on Boo. Boo was less than pleased. Marty

The buckskin mare will be making her appearance here soon. Toughest part is trying to figure out which of the dozens of stories to start with. I think it might have to "Don't hang out on that mare, Arnie."

Do you remember cow 1111? she calved when i was on seminar in great falls! i came back and heard about new practice of tagging calf while under said pick up! throw calf out one side skoot out other side jump in and floor it!sadie