The Things We Do for Fun

This being the frozen tundra, we don't have a whole lot of outdoor rodeos until the beginning of June. This weekend was the official opening of the Northern Rodeo Association season, with shows in Browning and Conrad, both of which are conveniently located close to where I live. So of course I entered. And of course, it rained. For days. And inches.

I was pleasantly surprised by the condition of the arena in Browning. They've hauled in a lot of sand over the years, and didn't get near as much rain as we did, and none fell during the rodeo. Which was good, because it was only forty five degrees outside.

Yesterday was gorgeous, sunny and warm, and today was close to the same, so by the time we arrived in Conrad for the world famous Whoop-Up Days, the arena was looking pretty decent. 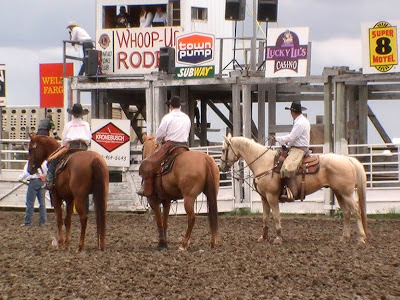 Ugly black clouds gathered, but slid off to the south, close enough to hear the rumble of thunder, but not a drop of rain fell...until over halfway through the rodeo. And of course, the breakaway roping is the second to the last event. The sky opened up right at the end of the barrel racing. It rained, it hailed, it thundered and even tossed a few bolts of lightning around. And no, the rodeo did not stop. The only event they cancelled was the little kids' mutton busting, and it wasn't because the kids weren't game (wimpy parents).

It was coming down by the bucketful during the saddle bronc riding, but cousin Beau still managed to spur one to first place. His grandmother was very pleased, because, as she said, "I was afraid his horse might slip and fall and I need him to run that damn ranch."

What can I say, we're a sentimental lot.

We hoped the storm would come and go, but instead it settled into a steady downpour. I've cracked out a new rope horse this year, and this is only her sixth rodeo. She'd like to have a look at her contract, because she's pretty sure she didn't sign up for this.... 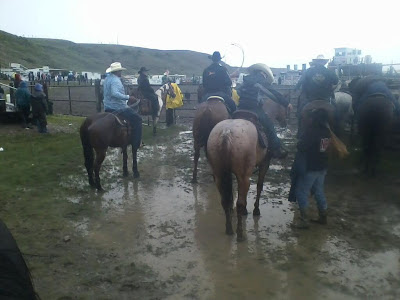 She handled it like a champ, though, gave me a throw to win first or second, but I roped the calf around the top of the head. Still, I was pretty happy with Tick's performance, if not mine. Shouldn't take more than a week to get my saddle and blankets dried out, but I'm thinking that rope will never be quite the same. 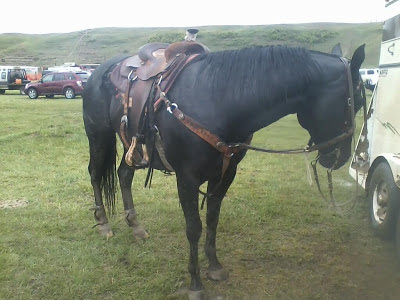 We sloshed back to our rig, soaked to the skin, and realized the down side of rodeos that are close to home. No need to bring the camper, so no dry clothes to change into. And despite the seventy percent chance of thunderstorms, it never occurred to me to toss any in the pickup. So I spent the drive home like this, trying to dry out my socks (notice the stains from soaking clear through my black boots) and the backside of my jeans: 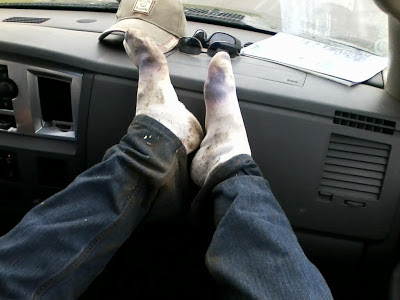 You rodeo people are just a little bit crazy, aren't you? *grin*

Your cousin Beau is the host of our Bear Creek (Bill Beck) guests this and next week! Small world for sure!

Diana: Cool. We're having guests from across the mountain this weekend, too. Ours are part of a bluegrass band, the Leftover Biscuits. If we'd planned better we could've had an impromptu hoe-down.

That would have been cool! Suzy got The Fosbery's for our Friday night entertainment - they were great. Fiddle and guitar. Love the Leftover Biscuits name!

I'm sorry we missed it. My parents went and said the music was really nicE. We debated coming down, but I didn't get home from work in Great Falls until after seven and I was whupped.