It never fails, you get the family together, the stories start to fly, and the next thing you know your sister is telling everyone about that time we smuggled a goat in from Canada.

I feel safe confessing this to all of cyberpace because it happened when I was in college and I assume there is a statute of limitations on goat smuggling. The rodeo coach at Montana State University had informed me that I needed to pick up another event, so I decided to give goat tying a shot. Unfortunately this required owning an actual goat, a fate which my family had so far avoided. Lucky for me friends in Alberta were kind enough to offer one up for the cause.

It’s also possible they just wanted it off their property.

There are means to legally import livestock from Canada, of course, but it seemed ridiculous to spend fifty bucks getting a health certificate on a free goat, so we stuffed it in the sleeper on the back of the pickup with strict instructions to stay low and keep quiet. We could have saved ourselves a whole lot of nail-biting. Even if it had bleated its presence to all and sundry I suspect the border officer would have developed a sudden, extreme case of deafness rather than risk having to confiscate the goat.

As it turned out, my goat tying career was short-lived. The goat was not. For years afterward it reigned supreme over the Longhorn roping steers, jabbing them in the belly with its sharp, curved horns if they dared cut in line at the feed trough.

I assumed that would be the end of goat ownership for me, but then I met my future husband. Greg’s goat was a billy named Bill. Yeah, I know, but the naming of animals isn't a real high priority for him. This is the same man whose dogs were named Squeak and Yip because that’s all they could say when he got them as puppies. His horse was called the Brown Horse. He did try to call it Vinita after the town in Oklahoma where he bought it. Then his friends changed it to Velveeta so he started just calling him the Brown Horse, which was perfectly logical name for a horse that is actually brown instead of, say, a dark red sorrel.

But back to the goat, another example of color confusion. Greg bought Bill for two dollars at the sale barn, thinking he’d make a good lead goat for a flock of ewes. Turns out white sheep won’t follow a black goat and Bill didn’t think much of sheep anyway, so he crawled through the fence and moved in with the cows. Summer pasture in the Sisseton hills, winter grazing on fields of corn stalks, where the cows went, Bill went, Lord and Master of the herd.

Then Greg decided to send the cows away for good, to be run on shares by his friend Hollis up on the North Dakota border. They filed up the loading chute and onto the semi while Bill bleated frantically back in the corral. As the last cow disappeared into the belly of the trailer and the door started to roll down, Bill took a wild run, jumped the gate and zipped up the chute, sliding under the door and onto the truck by a hair’s breadth, a move worthy of Indiana Jones.

Greg and the truck driver looked at each other. Then they looked at the truck. Bill had already belly-crawled under the cows, all the way to the front of the trailer.

Greg clapped the truck driver on the shoulder. “Looks like somebody just got themselves a goat.”

Needless to say, Hollis was thrilled. So was Bill. He happily lived out the rest of his days on their ranch because no one there was man enough to make him leave. 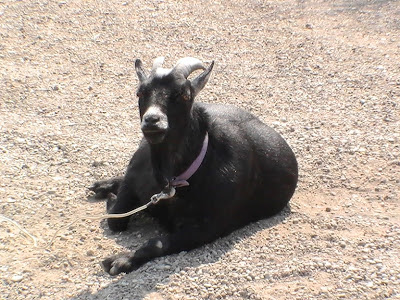 And I'm impressed with your badass smuggling skills. ;)

My husband isn't the best namer either. He named his dog Jill. His name is Phil. Now when I call Jill, Phil answers with "What?" And of course Jill just ignores me unless it's dinner time

Now isn't that just like a goat. Still laughing.